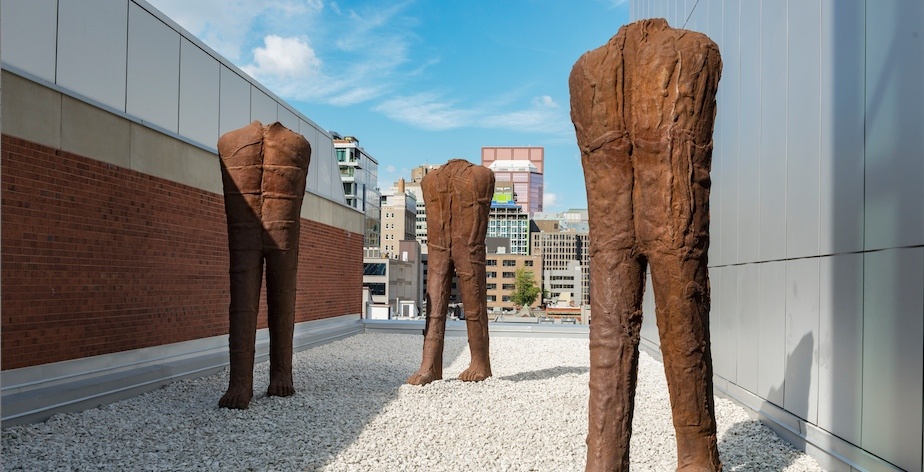 The Montreal Museum of Fine Arts have unveiled their newest exhibition as the ‘Walking Figures’ stroll to the museum’s third-floor Path of Peace section.

The three monumental sculptures weigh just under a ton each and stand at 9’3”. They were sculpted by the late Polish sculptor Magdalena Abakanowicz, widely regarded as one of Poland’s most acclaimed artists.

The three silhouetted figures were produced out of copper between 2004 and 2006 under Abakanowicz who was 76 at the time. Each sculpture is different, having been carefully designed as a single work.

The headless, asexual humanoids are meant to represent people’s hunt for food and their will to survive.

“With both legs firmly planted on the urban ground, they follow in the footsteps of ancient Greek sculptures – the kouroi – as well as ‘The Walking Man’ – the work of Rodin and Giacometti,” says Nathalie Bondil, the MMFA’s Director General. “Each of these monumental figures has its own expressionist texture, resembling wrinkled skin or tree bark. The choice of the raw material – corroded cast iron – evokes the fragile human condition as its telluric force.”

The installation of the three sculptures was an impressive technical feat in itself. Each ‘walker’ was lifted 55 feet into the air with a crane. Once they were hoisted on to the rooftop, each piece was anchored to a metal base.

Even though of Museum of Fine Arts constantly evolve and move their exhibitions, ‘The Walking Figures’ will be planted at the Path of Peace for a long time, as per the museum’s media relations.