Start filling up, Montreal. Gas prices in the city are the lowest it’s been in a year. Which mean, everybody is getting gasoline for Christmas.

According to the website GasBuddy, the average price for gas in Montreal is $1.12 per litre, the lowest it’s been since October 2017.

Montreal’s average is three cents higher than the current national average of $1.09 per litre but some stations are pumping out gas as cheap as $1.08 per litre.

Below is the website’s data for Montreal’s 12-month average retail price for gasoline.

Today’s gas prices are a significant decrease from this summer’s average of $1.49.

The highest recorded gas price average in Montreal was in April 2014 when vehicle’s sweet nectar was $1.51 per litre. 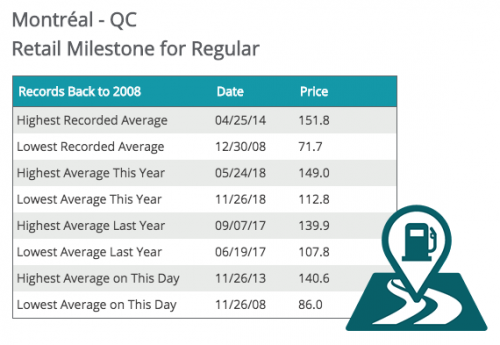