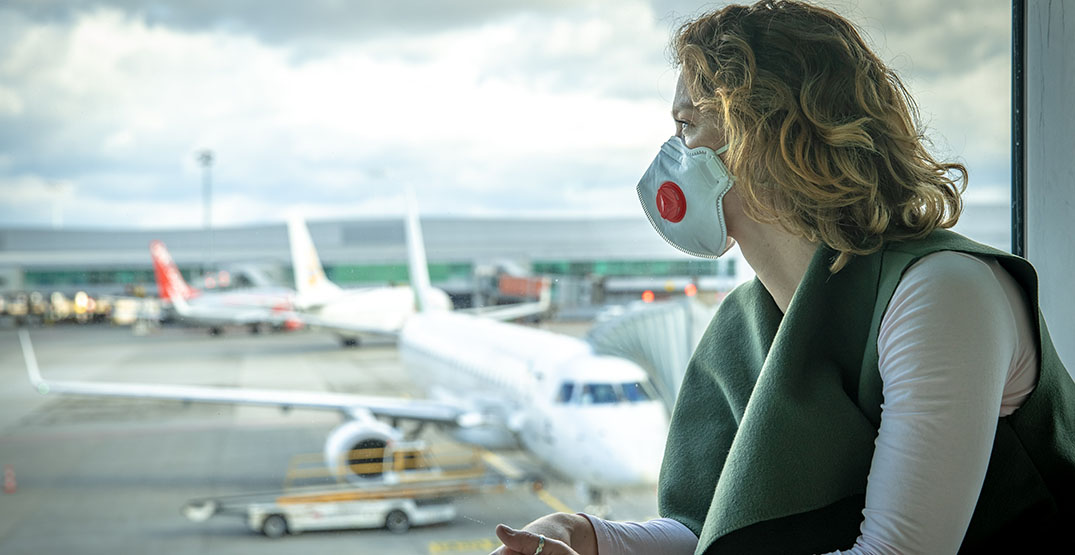 Curious about what your upcoming flight will be like? Thinking of booking a domestic or international vacation? Need to fly to visit a relative?

Air travel is not what it used to be, thanks to the coronavirus pandemic. Cramming into a flying tube next to hundreds of strangers suddenly seems even more uncomfortable than it did a year ago.

But what do those policies look like in practice? Daily Hive spoke with seven travellers who boarded planes recently at Canadian airports to get an idea of what the experience is like.

Keep an eye out for alerts about a changed departure time. With fewer passengers taking to the skies these days, airlines may swap a plane for one that’s better suited for the number of ticket holders.

If you’re flying internationally, you’ll also need to know the COVID-19-related customs requirements for your destination.

Kiarash Amani, who flew to Hungary this month to start medical school, said he needed to provide two negative COVID-19 test results that were 48 hours apart but within five days of arrival.

“The thing that was stressing me out [was] that the second test wouldn’t make it in time,” he said. 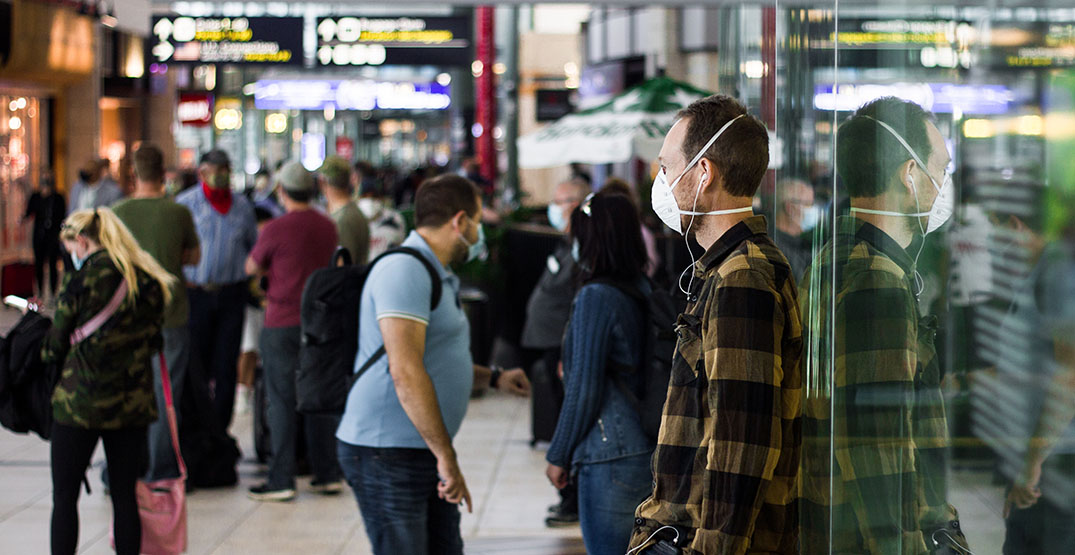 In many regions across Canada, wearing a mask indoors is now mandatory — including at the airport. Mask use was widespread within terminal buildings, according to the travellers Daily Hive spoke with.

After lining up to check your bag like usual, mask-wearing passengers proceed to security. Several of Canada’s major airports have now incorporated a temperature check as part of their pre-boarding security screening, where staff point a thermometer gun at passengers’ heads.

“Inside the terminal past security there’s a lot of signs promoting physical distancing and reminding you to keep your mask on,” said Sean Flynn, who recently flew from Calgary to Vancouver and then from Calgary to Toronto.

“People seem to be doing good job of at airports I was at,” he said.

However, not all passengers Daily Hive spoke with agreed that travellers were were respectful.

Heather Mak, who flew from Toronto to Calgary on August 15, said people were lining up like normal at the gate without much regard for two metres of space.

“At the mall, I went to line up at Brandy Melville. They came out with a measuring tape telling people to move back from each other,” she said. “It’s so strange to see a clothing store doing more than an airline.”

While boarding, some airlines have divided passengers into more zones. Taylor Hanson said her Toronto to Calgary flight had eight boarding zones instead of the usual five. When she boarded at Pearson, staff called everyone in window seats first followed by middle seats and finally aisles.

Staff may ask passengers to temporarily remove their mask before getting on the plane, but the travellers Daily Hive spoke with said there was enough space between them and the gate agent to feel comfortable taking it off.

Airlines have resumed their customary practice of filling all seats on board, and how full a flight is can impact how safe it feels, travellers told Daily Hive.

Amani’s transatlantic flight was relatively empty, and he felt reassured having a whole row to himself. On the other Hand, Mak’s flight was overbooked and she was bumped to the next one. She ended up sitting directly beside a stranger.

“It did seem a little uncomfortable,” she said.

Many airlines now give customers a coronavirus care package as they board containing items such as a small water bottle, hand sanitizer, sanitizing wipes, and a snack such as pretzels.

Passenger Aaron Cressman told Daily Hive he received his care package from the gate agent. However, Hanson said she received hers after takeoff — but would have felt safer getting it beforehand to wipe down her seat.

Canadian airlines are still doing mid-flight drink service. But now they offer the entire drink container — a little water bottle or can of pop, for example.

There is no in-flight meal service in economy class; however, one business-class passenger said she received a tray of pre-packaged food.

If you need to use the lavatory on board, the passengers Daily Hive spoke with said it’s pretty much the same.

Flynn, who works in the airline industry but is laid off right now, said some planes block off one lavatory for crew and leave the other for passengers. On his flight as a passenger, he noticed people watching the lavatory to see when it was free rather than waiting in the aisle.

But other travellers said people were queuing like normal.

How safe does it feel?

Flying during the pandemic can vary greatly depending on how full your plane is, how much other passengers respect mask-wearing and physical distancing guidelines, and how well airline staff keep things organized, travellers told Daily Hive.

“I felt very safe,” Flynn said. “I think the airlines want people flying pretty badly. Obviously they’re all struggling financially right now, so they’ll do everything they possibly can to make the general public feel safe.” 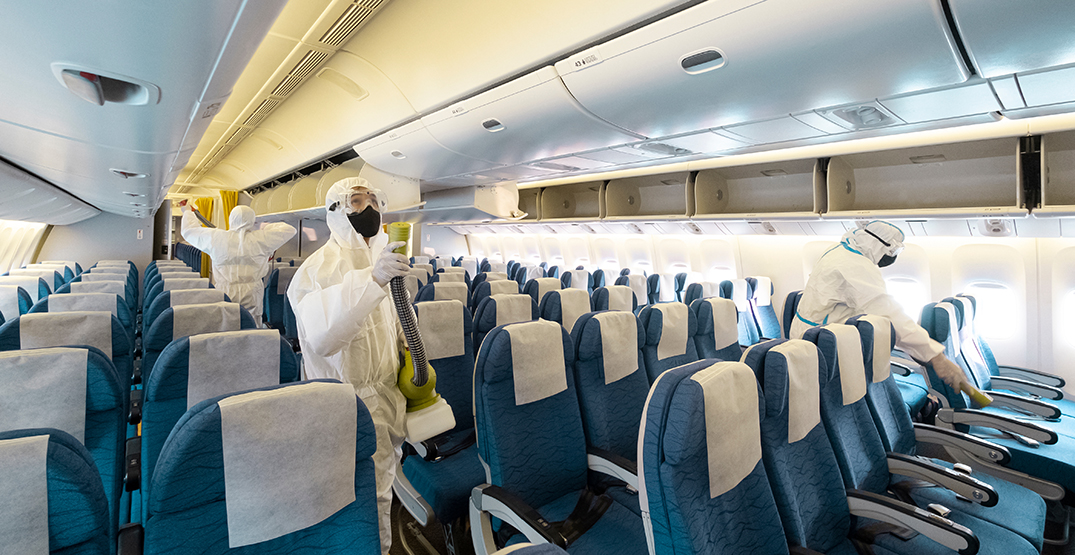 An airplane gets deep-cleaned in Bangkok, Thailand (Pradpriew/Shutterstock)

Seeing other passengers wear masks, including an older couple who added ski goggles to their protective ensemble, also made Cressman feel comfortable.

Hanson felt fine too, although she would have liked flight attendants to enforce mask-wearing more rigorously.

“If someone didn’t have their mask fully on, it would have been nice to see them patrolling a bit more and making sure that was consistent,” she said.

All passengers (except for children age two and under) are required to wear masks the entire flight, except when eating or drinking. Transport Canada is now issuing $1,000 fines to those who disobey the rules.

Mak, whose flight was full, said although she was fine with her flying experience, she wouldn’t recommend it to friends who are more nervous about coronavirus.

“It was weird to be so close to random strangers when this entire time they’ve been telling us to distance from people,” she said.