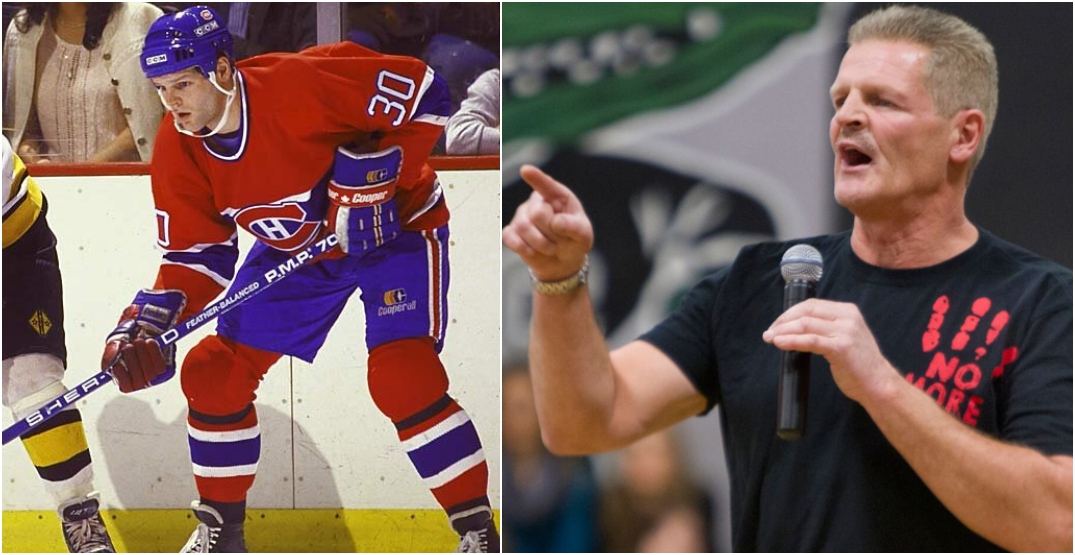 From the penalty box to the podcast booth, it’s been quite the journey for Chris Nilan.

You would be hard-pressed to find another figure in the city as unique and outspoken as the former Montreal Canadiens tough guy. As a player, radio personality, public speaker and now podcast host, the man they call “Knuckles” is truly one-of-a-kind.

Drafted by Le CH in 1978, Nilan was a kid from Massachusetts who was, unsurprisingly, crazy about his hometown Bruins. By 1980, after crossing enemy lines, he was a regular in the Canadiens lineup. That’s where his love affair with Montreal began.

Nilan wore his heart on a red, white, and blue sleeve for eight seasons. As the team’s primary enforcer, he squared up against some of the toughest players the game has ever seen and earned a Stanley Cup along the way.

Knuckles played a few seasons with the New York Rangers, and eventually ended up in Boston as a member of the Bruins, but his allegiance remained with the Canadiens. And when it came time to retire from the game, it was time to once again call Montreal home.

Over the years, Nilan has become beloved in his adopted city once again — this time hosting his own radio show Off the Cuff on TSN 690. His commentary, insight, and wit have been appreciated by casual and hardcore fans alike.

After a decade on the radio, the 64-year-old has recently branched out on his own into the podcasting realm. While the official release date of his show is unknown, Nilan told Daily Hive that all would soon be revealed.

I was lucky enough to have a chat with the hockey icon as part of our “5 questions with” series.

You’ve been teasing the release of a podcast on your social media accounts. What can we expect from the new show, and how does it differ from Off the Cuff?

Off the Cuff, being a radio show, was obviously more Habs-centric. For the podcast, I’m going to get into speaking with different characters. I’m going to have quite the variety of people coming on. Characters from the game, athletes from different sports, authors, etc.

I just want to be able to talk about things that I find interesting. I hope that the people who tune in will maybe get to see another side of me, one they didn’t get on the radio.

You have a unique perspective of the Montreal/Boston rivalry. What was it like to play on both sides of it? How are you treated in Boston?

It felt weird when I played for the Bruins against the Canadiens. It wasn’t the same for me. Put it this way; I had a whole lot more passion playing for the Habs against the Bruins than the other way around.

I hated the Canadiens and was a big Bruins fan growing up. But then, when I got my opportunity, and I became entrenched in the rivalry, there was really no looking back, you know?

Who would you say is the toughest guy currently playing in the NHL?

Tom Wilson is up there, but my problem with him is that when Ryan Reaves challenged him in Vegas, Wilson wouldn’t fight him.

It came off like, “I’m a good player. I don’t have to fight a guy like you,” which I had a problem with.

But I think those two guys are right up there. All those guys that do that job are tough, you know? It’s not a job for the faint-hearted.

Aside from winning the cup in ’86, what’s one of your greatest memories as a player here?

Just playing with those Great Hall of Famers. I had the opportunity to play with guys like Bob Gainey, Guy Carbonneau and Chris Chelios.

And the fact I ended up with the most storied franchise and became a full-time regular player on that team, somebody who had an impact.

Just to wear that jersey it’s an incredible accomplishment for a kid from Boston.

I’ve always wanted to rejoin the organization. You know, as an ambassador, that’s never happened. I don’t think it ever will. I thought I was getting close, but nothing ever materialized with that.

No matter what, my passion and love for the organization is the same.

If someone told you they were coming to Montreal for the day, what kind of things would you suggest they do?

I think there’s no question about going to Schwartz’s and having a sandwich. They should also go up Mount Royal and check out St Joseph’s Oratory and take a look at the city from above.

It’d also be best to visit around playoff time, especially if the Habs are in the playoffs because there’s no better feeling in any city than when it’s playoff time here.

There’s a buzz in this city that makes it different from the rest. It’s just electric, and people can feel it.