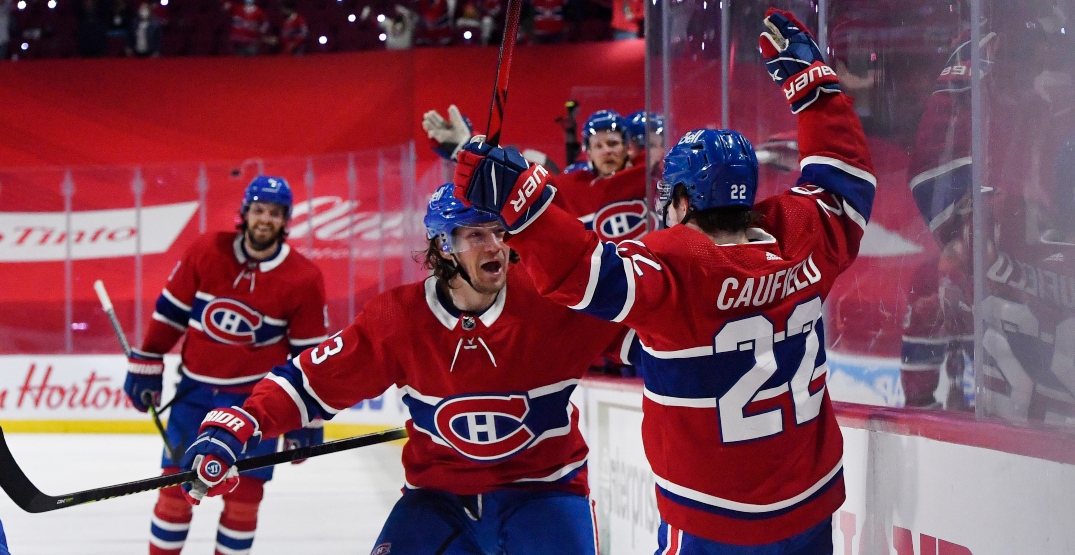 After scoring the tying goal late in the third period, Josh Anderson scored the overtime winner as well to give the Montreal Canadiens a 3-2 win over the Vegas Golden Knights in Game 3 at Bell Centre on Friday — as well as a 2-1 lead in their Stanley Cup semi-final series.

The Canadiens improved their overtime record to 4-0 in these playoffs.

Corey Perry was in the Habs’ dressing room when the overtime goal was scored after taking a stick to the face from Jonathan Marchessault, but came back out to celebrate with his teammates — and maybe give the refs a little more grief for not calling a high-sticking penalty on Marchessault.

Brutal missed call on Corey Perry. Bleeding and everything pic.twitter.com/16e44UNB0Z

A little blood didn't stop Corey Perry from being a part of the celebrations. #ItsOn pic.twitter.com/W4fPUjs8bZ

Anderson tied things up with less than two minutes to go in the third period thanks to an epic puck-handling gaffe by Marc-Andre Fleury.

The tying goal was Anderson’s first point since Game 1 of Montreal’s first-round series against the Toronto Maple Leafs.

The Canadiens have typically had good starts to games in this postseason. Tonight was not one of those games. The Golden Knights outshot them 17-3 in the first period, and while they were able to get to the first intermission with the game still scoreless, Nicolas Roy opened the scoring for Vegas early in the second period.

Cole Caufield responded for Montreal less than a minute later, extending his point streak to five games. Alex Pietrangelo scored his third goal in the last two games early in the third period to put the Knights back on top, at least until Fleury’s gift to Anderson.

Until Fleury’s misplay, it was hard to believe any mistake in this game was going to top the brutal turnover by Eric Staal to Roy on the opening goal for Vegas just over three minutes into the second period.

Given how severely tilted the ice had been toward Montreal’s end to that point in the game, and given the disparity in the Habs’ record in these playoffs coming into tonight when they scored first (9-1) compared to when the other team did (0-3), that didn’t seem like a good omen for them.

But just 38 seconds later, Nick Suzuki sent Caufield in on a breakaway, and the rookie made no mistake.

Cole Caufield extends his point streak to 5 games with this beauty 😱 #ItsOn pic.twitter.com/0Ndb02K5KP

The Golden Knights continued to control the play through the second period, though, owning a 13-5 edge in shots in the middle frame. Then just over two minutes into the third period, Pietrangelo put Vegas back in front.

1-on-3. No problem for Pietrangelo 😎 #ItsOn pic.twitter.com/06kpUN0SrY

While that may have been a goal Price would like to have back, overall he was terrific once again for Montreal, finishing with 43 saves on the night — perhaps none bigger than this save on Alex Tuch in the third period.

Montreal was without head coach Dominique Ducharme in this game due to a positive COVID-19 test.