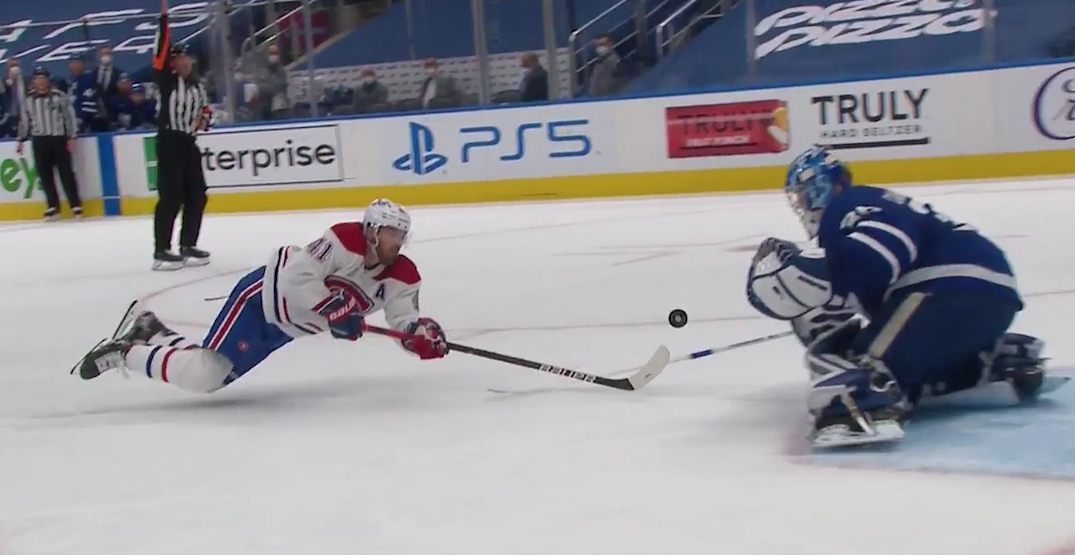 Looking to pull off a stunning playoff upset for the second straight year, the Montreal Canadiens got off to a good start on Thursday with a 2-1 win over the Toronto Maple Leafs in Game 1.

A highlight-reel worthy shorthanded goal from Paul Byron with just over seven minutes to go in the third period broke a 1-1 tie.

Josh Anderson opened the scoring in the series just over 12 minutes into the first period with a beautiful shot after splitting the Toronto defenders.

Anderson was all over the ice on Thursday. He led Montreal forwards with four shots on goal, also adding three hits and this great backcheck on Mitch Marner.

While the excitement of the first Habs-Leafs playoff game in more than four decades was still setting in, a pall was quickly cast over the series in a terrifying moment where John Tavares took Corey Perry’s knee to his head.

Perry clips Tavares in the head

The Maple Leafs captain was taken to hospital after being stretchered off the ice.

After getting some time in the intermission to regroup from the ugly incident, the Leafs came out and tied things up just over four minutes into the second period when William Nylander put home a rebound.

It’s only Game 1, but if it was in any indication, this won’t be the lopsided series some seemed to think it would be. Not only did the Habs show they can play with the Leafs, but Carey Price played what might have been his best game of the season. Price stopped 35 of the 36 shots he faced.

Price’s biggest save of the night came on a Marner one-timer on a 2-on-1 nearly midway through the third period.

After a tumultuous season, Price was a big wild card coming into this series. In Game 1, he looked like the goalie he was in the bubble last year. If he can keep playing like this, this is going to be an interesting series.

Game 2 is set to go at Scotiabank Arena in Toronto at 7 pm ET on Saturday.