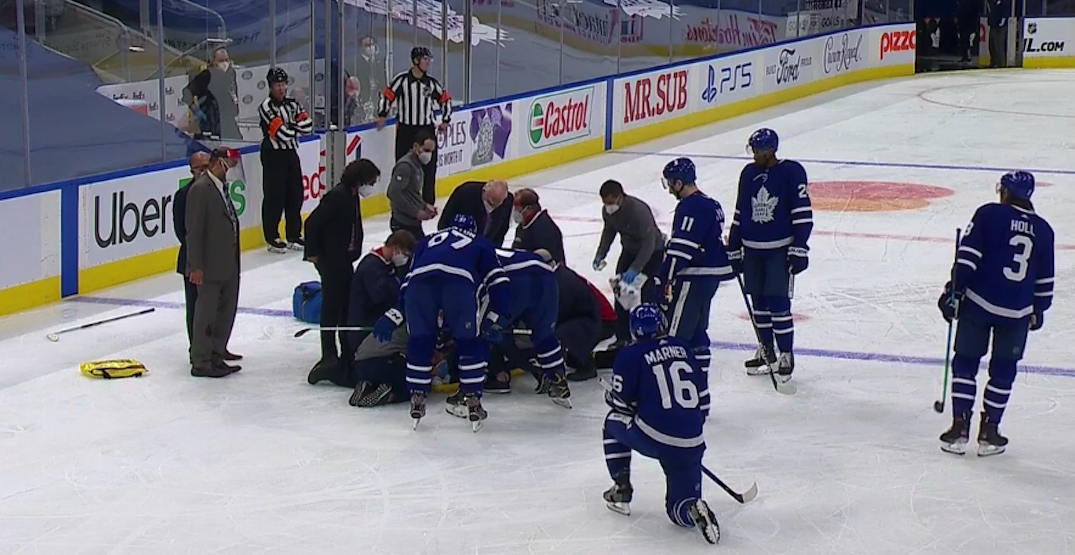 Tavares had to be stretchered off the ice at Scotiabank Arena, midway through the first period of the opening game of the Leafs’ playoff series against the Montreal Canadiens.

The Leafs captain fell to the ice after being bumped by Habs defenceman Ben Chiarot. He fell into the path that Corey Perry was skating into, with the Canadiens forward unable to avoid running into him. Perry tried to jump out of the way, but his knee made contact with Tavares’ head.

Perry clips Tavares in the head

Tavares tried to get up, but the trainer appeared to want to stabilize his neck.

I hope Tavares is okay pic.twitter.com/Bm2YzkR3pg

There was a nearly 10-minute delay before Tavares was able to get off the ice with a stretcher. The Leafs captain did give a thumbs up signal while he was being carted off.

Thumbs up from John Tavares as he's stretchered off the ice following a freak accident with Corey Perry pic.twitter.com/C3PidL1GJ2

Tavares has since been transported to hospital.

“We’d like to express our concern for John Tavares and are sending him our best wishes for a speedy recovery,” the Canadiens tweeted.