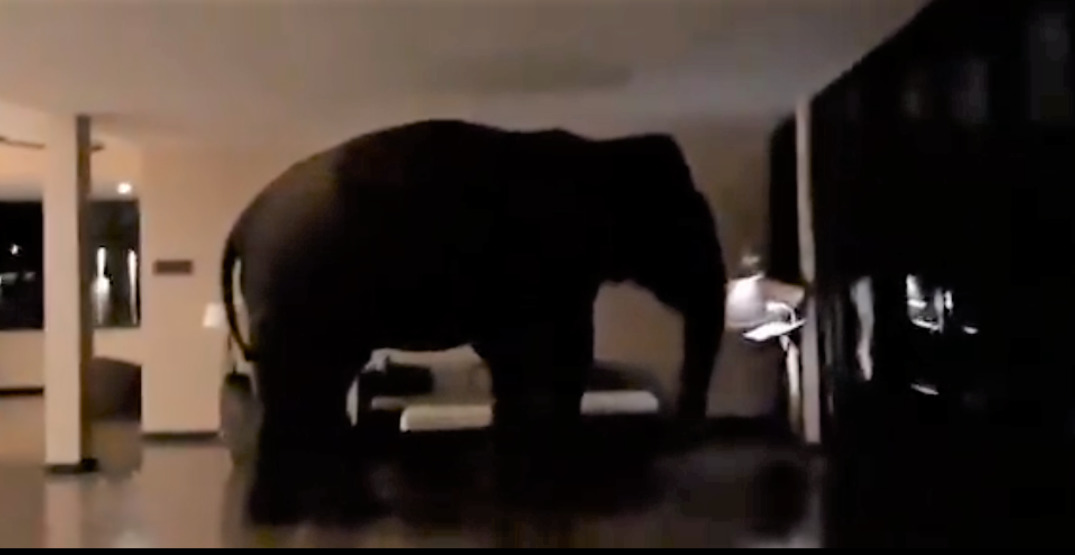 Most people anticipate other guests when staying at a hotel. They may be tall, they may be reserved, and they may even carry a trunk.

However, they typically aren’t elephants.

In a video shared on Twitter by user @upidaisy, a wild elephant can be seen wandering around the Jetwing Yala Hotel in Sri Lanka like it owns the place.

woke up to a text from my mom about how a wild elephant went into a Sri Lankan hotel and gently wandered around while poking stuff with his trunk pic.twitter.com/C2biQT8C30

Sent to the user by her mother, the video depicts the elephant graciously tip-toeing its way through the hotel, curiously looking around and pausing periodically to investigate various items with its trunk.

In one instance, you can see the gentle giant knocking over a lamp in one of the rooms.

The tweet has received nearly seven million views, with many Twitter users revelling in the adorable inquisitiveness and calm demeanour of the animal.

Aw you know he felt bad about knocking that lamp over. It’s ok Mr. Elephant, we know you didn’t mean to.

This elephant: curious and courteous.

Oh my goodness I love this story so much. Even wilder than drug induced hallucinations, is reality itself sometimes.

It’s like he’s tiptoeing so not to disturb anyone.

Other users were quick to make jokes and puns regarding the situation.

Now let’s talk about the elephant in the room.

2 stars – no grass. do not recommend.

This is rare in our Canadian hotels, because most of them spray a bit of elephant repellant around the lobby. Seems to work.

Waiting for the bellboy to step in and ask if he would like help with his trunk.

Q: What’s that elephant doing in this hotel?

A: Whatever he wants.

After the tweet gained popularity, the hotel reached out to the user and offered to host her for free. Instead, she requested that they donate the cost of a free room to local elephant conservation.

The family of the hotel later explained that the elephant’s name is Natta Kota, and he has been a regular on their grounds since 2013.

According to another tweet by @upidaisy, “He comes & goes in peace, takes naps & “steals” food from the kitchens. He’s free and gentle and well-loved by the staff.”

After the tweet went viral, Jetwing Yala Hotel uploaded a video to its YouTube channel entitled “Get to know Natta Kota,” explaining that the playful bull has made himself a “celebrity amongst guests.”

However, they do emphasize that while he is a frequent visitor to their hotel, guests should be reminded he is still a wild elephant, and they would like him to remain as such.

In that regard, visitors should respect the animal’s space, refrain from feeding him, and avoid using flash photography.

Mapped has reached out to Jetwing Yala hotel for a statement.