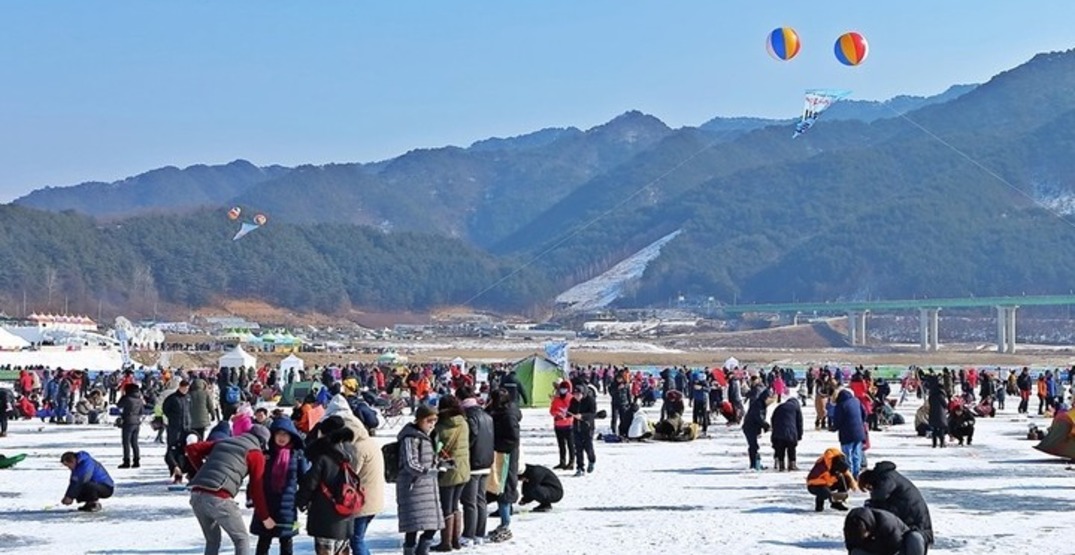 The annual Inje Icefish Festival has officially kicked off in a northeastern county of South Korea.

The festival will be open from now until February 2, 2020, on the extensive — and currently frozen — Soyang Lake 165 km northeast of Seoul.

The Inje Icefish Festival originated in 1998 and has since become one of South Korea’s most famous festivals.

When the lake freezes over in the winter months, a small icefish village located in Nam-myeon, Inge-gun, Gangwon-do, is inundated with tourists trying to catch icefish.

According to the event’s press release, the slogan for this year’s event is “20 Years Together, 2020 to be Together.”

The star of the festival is smelt (or bingeo in Korean).

Smelt are small schooling fish that live in cold water that is less than 10°C and are most active between December and February.

According to the festival’s website, the fish are nocturnal, and the best time to catch them is before 10 am and after 4 pm.

The most common way to eat smelt is by dipping them in red chilli-pepper paste and eating them alive.

Many people choose to cook them with various methods, though, because they are not a fan of the texture of the raw fish. “However, when you get used to the delicate scent of cucumber and crunchy texture of icefish, you will wait for the wintertime,” the website explains.

The flavour is also dependent on the size of the fish. When the smelt is too large, they don’t taste as good because of the bone.

However, when they are small, there is not enough to indulge in the unique cucumber smell of the fish.

A 66,100-square-metre fishing zone is created on the frozen lake, the release states, with roughly 2,000 holes bored in for anglers to utilize.

The festival this year offers guests 33 activities and programs from sledding, skating, and Argo riding to tasting bingeo and other local cuisines.

“Visitors can also watch drones operated by pilots, and a Snow Village reminiscent of downtown Inje in the 1960s,” the release notes.

The ice fishing itself is free. However, visitors are required to pay a fee for any fishing tool rental as well as bait.

Additional costs also apply for fishing in tents, skating, sledding, and other activities.

According to organizers, over 50,000 people attended the opening day of the festival.