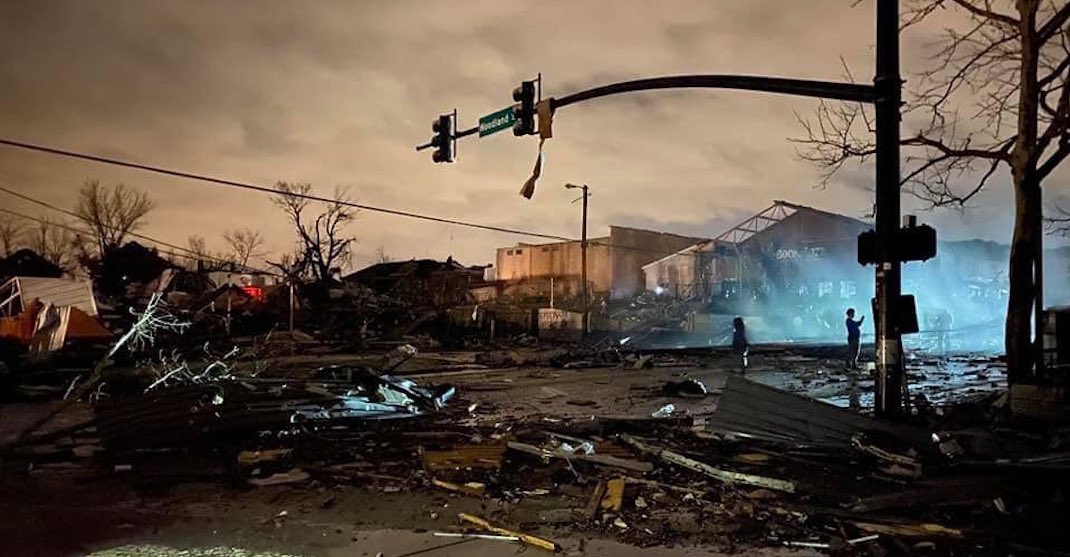 A devastating tornado struck parts of Tennessee in the late hours of Monday night, causing significant damages and a number of fatalities.

According to the Tennessee Emergency Management Agency (TEMA) a State of Emergency has been declared.

“Starting on March 2, a line of severe storms passed through Tennessee and has caused major damage to buildings, roads, bridges, utilities, and businesses in several counties,” says the latest update TEMA.

“Tornado damage has been reported throughout West and Middle Tennessee including downtown Nashville, TN.”

Counties with the greatest impacts include Davidson, Wilson, and Putnam Counties.

The Tennessee Department of Health has confirmed there are 22 fatalities as of Tuesday morning, and the exact number of injuries is unknown at this time.

The state is continuing damage and road assessments, and it is estimated 73,000 residents are without power across four counties.

According to The Weather Network, the tornado, at a speed of 72 km/h, collapsed many structures, and it is estimated that multiple people are still missing.

In a news briefing, Governor William Lee says that the death toll may rise given the number of people who remain missing statewide, and that officials are doing door-to-door checks.

The Nashville Predators, who played a hockey game in Nashville Monday night, hours before the tornado struck, have opened up the doors to their home stadium Bridgestone Arena, to anyone affected by the storm.

We love you and we want to help. We will be serving pizza at @BrdgstoneArena beginning at 11 a.m. for all those affected by last night’s storm. Please feel welcome to come and bring anyone who needs it. 💛🍕

Four shelters are also open across the state, according to TEMA, including two American Red Cross Shelters, and two shelters in Wilson County.

Residents of Nashville and surrounding areas are taking to social media to share the aftermath of the damages.

Pictures coming in from East Nashville: This is Woodland & 10th. That’s where Drifters, Beyond The Edge, Five Points Pizza, etc used to be.

I’m crying, man. This is hard to see. pic.twitter.com/kpPHulgypq

This is 5 points area in East Nashville @NC5 pic.twitter.com/KkWFzljf0j

One of our helicopters just landed after surveying tornado destruction from overnight. pic.twitter.com/XmBpbOmBuf

People say, “It’s just stuff” & it is, but it’s someone’s memories & someone’s belongings that they worked their ass off to obtain, for themselves & their families. #PrayForCookeville #Tennesse #Tornado 🙏🏼 pic.twitter.com/XEvwB4X8SW

The iconic “I Believe In Nashville” murals started popping up after the big flood ten years ago. It’s stood as a symbol of resilience and togetherness. We are heartbroken for our community after last nights tragic tornado, but know that together we will rise up and rebuild again! pic.twitter.com/WlDutCaHhw