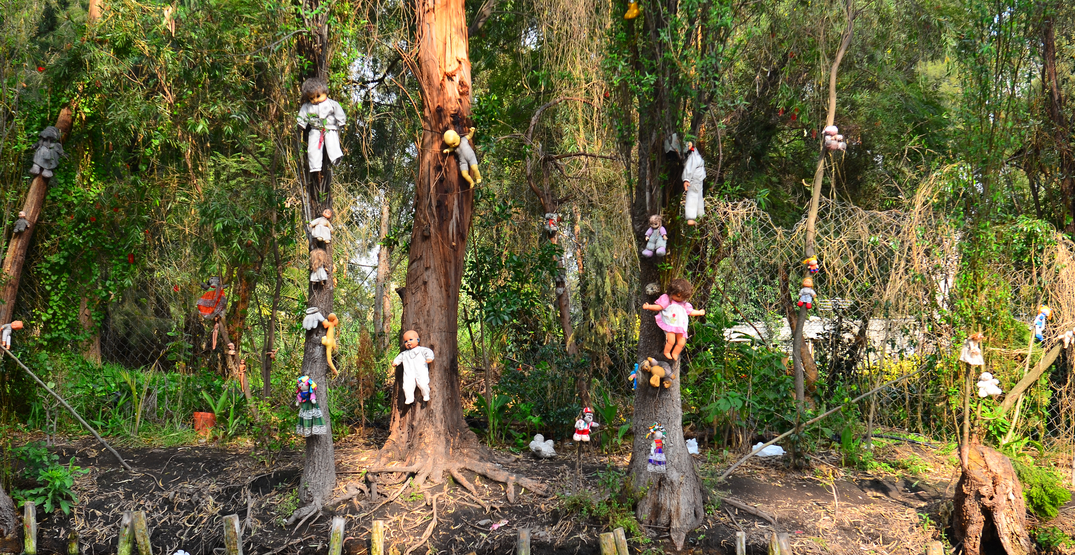 We’re all fascinated by things that we find out of the ordinary.

Whether it’s quirky, questionable, or just plain weird, things that are quintessentially ‘other’ have a way of piquing our curiosity.

Ultimately, one of the primary underlying reasons that we travel is to venture outside of our comfort zones and experience things and visit a destination that is entirely outside our norm.

To that end, if you’re looking to add some variety to your next trip, here is a list of six travel destinations that are famous for their unusually eclectic, creepy, and downright strange attractions.

Isla de las Muñecas, or the Island of Dolls, is located in the channels of Xochimilco, south of Mexico City.

What may come across as an entirely creepy attraction, the island actually has a rather sad backstory. It is dedicated to the memory of an unfortunate little girl who passed away strangely and mysteriously.

The legend states that Don Julian Santana Barrera — the island’s caretaker — found the young girl who had “drowned in mysterious circumstances” and was unable to save her.

Julian then saw a doll floating nearby and assumed that it was most likely the little girl’s. He decided to fasten it in a tree as a sign of respect to honour for the girl’s spirit.

Later on, the spirit is said to have haunted Julian, prompting him to hang more dolls as a means of pleasing her.

However, he soon began to believe that all of the dolls were possessed by the spirits of dead girls and proceeded to hang more and more creepy dolls all over the island.

Ultimately, after a lifetime of collecting and hanging the dolls, Julian was found in the same location as the girl, having also drowned.

Some visitors claim to have heard the dolls whispering to one another or luring them to the island.

Whether or not you choose to believe the myth, the decapitated dolls with their missing limbs and blank stares make Isla de las Muñecas a destination to make anyone’s skin crawl.

Located 30 km from Bikaner, Rajasthan, India, the Karni Mata Temple is a temple dedicated to the female Hindu warrior sage of the same name, Karni Mata.

What makes this destination unique, to put it lightly, are the furry friends that act as the temple’s residents.

These tenacious tenants have provided the structure with the additional name, Temple of Rats.

The story goes that Karni’s youngest son had drowned. Wholly distraught by the tragedy, she enlisted the help of Yama — the god of death — to bring him back to life.

However, Yama said that he would be unable to return her son’s life.

Being an incarnation of the Goddess Durga herself, Karni resurrected her son and announced that members of her family would no longer die. Instead, they would be reincarnated in the form of rats.

Roughly 20,000 rats are protected, fed, and worshipped at the temple.

This museum does not leave a lot to the imagination.

Located in Reykjavík, The Icelandic Phallological Museum holds a collection of over 200 “penises and penile parts” belonging to nearly all of the land and sea mammals found in the country.

Examples of items guests can expect to see include 55 specimens from 16 different species of whale, a sample from a “rogue” polar bear, and 36 specimens from seven distinct kinds of walrus and seal.

“All in all, a total of more than two hundred specimens belonging to forty-six different kinds of mammal, including that of Homo sapiens,” the museum’s website explains.

4. The Door to Hell, Turkmenistan

Someone call Buffy the Vampire Slayer because the hell mouth is open.

Darvaza gas crater, also known as the Door to Hell or Gates of Hell, is a collapsed natural gas field located in the Karakum Desert near Derweze, Turkmenistan.

According to Smithsonian Magazine, a group of Soviet geologists ventured to the Karakum Desert, searching for oil fields in 1971.

However, when they found what they thought to be one and began drilling, it turned out to be a large pocket of natural gas that could not support the weight of their equipment.

Ultimately, the site collapsed and took the equipment with it.

The effect was a chain reaction that caused the sedimentary rock of the desert to collapse in other areas, resulting in the creation of several open craters.

Soon, the scientists had another issue to deal with: the natural gas escaping from the crater.

The natural gas primarily consisted of methane. Although it is not technically toxic, methane displaces oxygen, which makes it challenging to breathe.

Though it may not have posed a direct threat to the geologists directly, animals inhabiting the surrounding area began to die shortly after the collapse.

Thus, the scientists decided to light the crater on fire in hopes that all of the dangerous gas would burn off over a few weeks.

However, researchers are still unsure just how much natural gas remains in the crater, which has continued to burn at this destination for nearly half a century.

If you’re looking for cute souvenirs and trinkets, maybe try another market.

If you’re looking to exact revenge on someone who has wronged you, you have arrived at the right destination.

The Akodessewa Fetish Market, or Marche des Feticheurs, is a remote destination in western Africa that primarily sells items associated with Voodoo — or Vodou, as they call it.

Whether its fetishes, charms, or whatever else you need for a ritual, you can find it here.

Voudo is a religion that originated in West Africa and remains very sacred to the people living there today.

This market, in particular, is a vital hub for local practitioners to obtain their materials.

From dead birds to monkey heads to human skulls, the market is abundant with any necessary items for the practice of Voudo.

Additionally, you may even have the privilege of a Voudo priest creating fetishes or blessing your items.

Such blessings are to ensure that the items perform specific tasks such as helping you find love, protecting you from poison, or keeping you safe while travelling — now, who doesn’t want that?

Alright, this last one is cheating a little bit because it’s not actually a destination that you can visit.

North Sentinal Island is a 52 square-kilometre tiny piece of Indian territory in the Andaman archipelago, 48 km west of Great Andaman in the Bay of Bengal.

What makes the island unique, however, is that it is home to one of the world’s most isolated, least-contacted, and least-researched tribes of indigenous people, the Sentinelese.

According to Smithsonian Magazine, the island’s people “unique genetically, linguistically and culturally, isolated for millennia, is notably unfriendly to outsiders.”

The entirety of the island is protected and patrolled by the Indian government.

Not only is it prohibited to visit it, but it is also illegal to approach the island from as far as six miles away.

One Christian missionary, John Allen Chau, decided to ignore this rule and illegally solicited five local fishermen to transport him close to the island in November 2018.

On his first attempt to reach the shore, Chau was met with arrows and had no choice but to retreat.

A couple of days later, he paddled in again and the same fishermen supposedly saw the Sentinelese people dragging his alleged dead body along the beach.