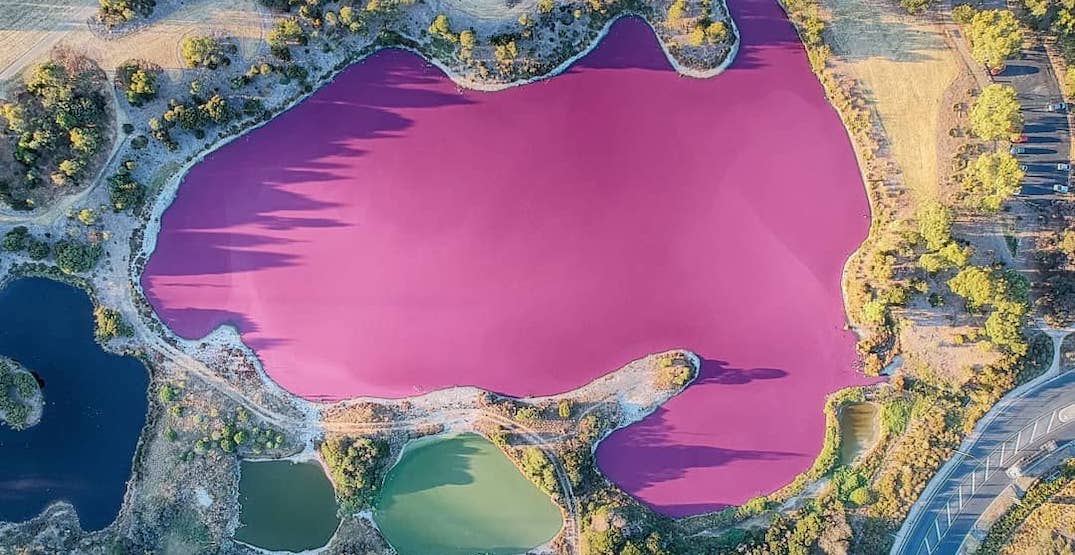 A lake in Melbourne has just turned pink.

Passers-by initially believed the change in colour was caused by a toxic chemical spill from the neighbouring industrial park, but experts quickly confirmed that the event is all-natural.

Though some locals are in varying states of shock and awe, this isn’t the first time the Westgate Park lake has experienced this phenomenon. According to Lonely Planet, the same transformation took place this time last year. In fact, ‘Westgate Lake is pink again’ seems to be a recurring caption amongst #westgatepark Instagram posts.

What exactly is causing this whimsical phenomenon?

“(The) small lake turns a deep, dark pink when algae growing in the salt crust at the bottom produces a red pigment as part of its photosynthesis process,” Parks Victoria conservationist Phil Pegler told the press.

The fleeting event only occurs under very specific conditions. To turn an otherwise blue lake pink requires extremely high salt content, hot temperatures, bright sunlight, and a lack of rainfall. This unique combination is what triggers algae in the lake’s salt crust to release the red pigment.

The pigment itself is called beta carotene, which is naturally found in a variety of fruits and vegetables including carrots, sweet potatoes, and apricots. While beta carotene and the pink lake water are technically safe, visitors are discouraged from swimming in the lake due to its excessive salt levels.

To conduct further research, samples of the pink lake water have been taken to the University of Melbourne by a local company called Glas. Like many others flocking to social media with ‘gram worthy pics, Glas re-affirms that this is a natural event and not indicative of a dawning apocalypse.

The Westgate park salt lake has gone pink again after the hot weather last week. We’ve been taking samples for experiments in our upcoming fisherman’s bend studio at The University of Melbourne.

Since the duration of the phenomenon rests in nature’s hands, anyone hoping to see the pink lake should take the chance while they can.

While Melbourne’s urban lake is the latest to go pink, several other lakes in lesser-populated parts of Australia are also known to turn shades of bubble gum.

That said, you don’t have to go all the way down under to see rose-coloured water. Adventurers should head to Cameron Falls in Alberta’s Waterton Lakes National Park after heavy rainfall. If the conditions are just right, you might be lucky enough to catch the falls looking pretty in pink.