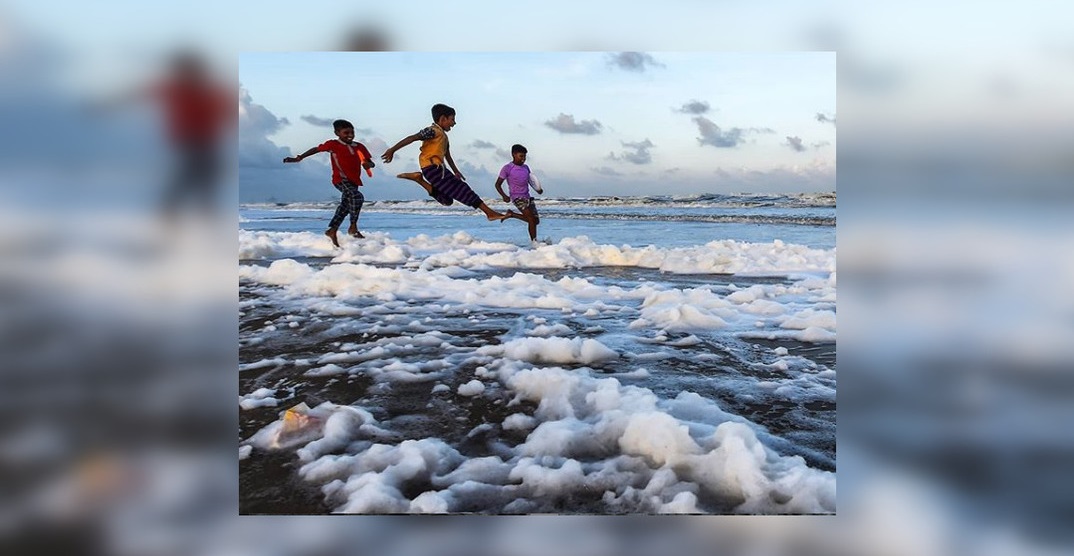 India’s famous Marina Beach in Chennai was seen on Monday blanketed with thick white foam, much to the delight of children who quickly ran to play in the froth.

However, local reports say that the foam is unsafe.

Produced when toxic water coming through the Adyar River combines with untreated sewage, the foam mixes and forms on the shore.

According to the Indian Express, “the area near Srinivasapuram, which is next to the Pattinapakkam, was filled with pungent smell as the toxic foam floated in the air.”

The foam is said to be a byproduct of heavy rainfall over the past couple of days, causing the water flow in the Adyar river basin to increase and prompting the mixing with the standing sewage containing high levels of phosphate — a chemical derivative of phosphoric acid.

The larger quantities of water along with untreated sewage entering the sea have combined with the turbulence of the ocean current to engulf the coastline in foam.

“We should ensure that our STPs [standard conditions for temperature and pressure] are designed in a way that can handle the excess water during the monsoon season. They need to identify and cut other untreated effluents entering the river,” environmentalist Pooja Kumar told Indian Express. “In previous years tonnes of fishes died during the frothing time. And this happens a lot in urban sectors because of the large amount of untreated sewage.”

Local officials informed Indian Express that the foam would disappear within a day or two.

However, Monday marks the fourth consecutive day that the toxic white bubbles have washed up on the beach’s shore.

This is not the first time foam has materialized either.

Children are seen playing in a toxic foamy discharge at Marina beach in Chennai, #India, oblivious to its dangers. The frothing foam is generated by pollutants mixing with seawater. pic.twitter.com/2zyI5hSVAG

According to CNN, a similar foam appeared on the riverbanks of Bangalore in 2017, where officials fenced off the location where the foam was growing because it contained a carcinogen that could cause skin and respiratory problems.

Local children were seen playing on the shore of Marina beach as they did not realize the hazardous effect of the foam.