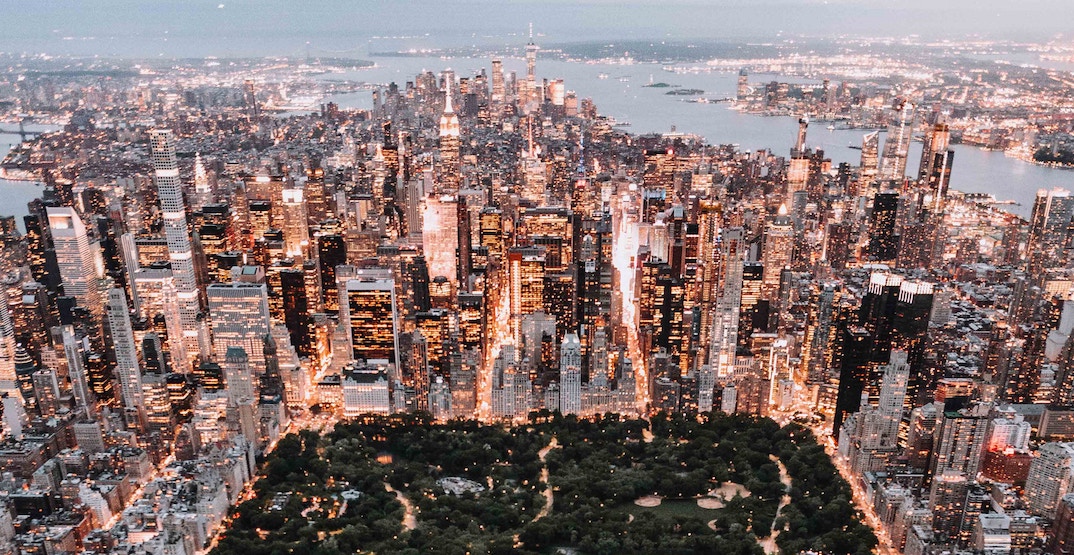 Looking for the best luxury hotels in New York? You’re in for a treat.

One glance at the New York skyline will confirm the city is rich in architecture and sightseeing attractions. Dig a little deeper and you’ll find the city boasts a deep history and a diversely woven fabric of people. New York also happens to be much more than these tangible things — it is a cultural mecca that has birthed several artistic movements ranging from Pop Art to Hip Hop.

At the end of the day, you’ll find the best of the best in New York. It rivals European hotspots as a place to shop for designer brands, whether handbags or sneakers. It is also a destination for nightlife and high-end cuisine, with nearly 80 Michelin-starred restaurants and five 3-star establishments just in Manhattan.

But when you’re shopped out or under the spell of a food coma, there’s only one thing you really need: a luxury hotel in New York.

We have rounded up the crème de la crème of luxury hotels in New York, but please — be warned — your bathrobe-clad self may never want to leave your room.

Here are 11 of the best luxury hotels in New York City. 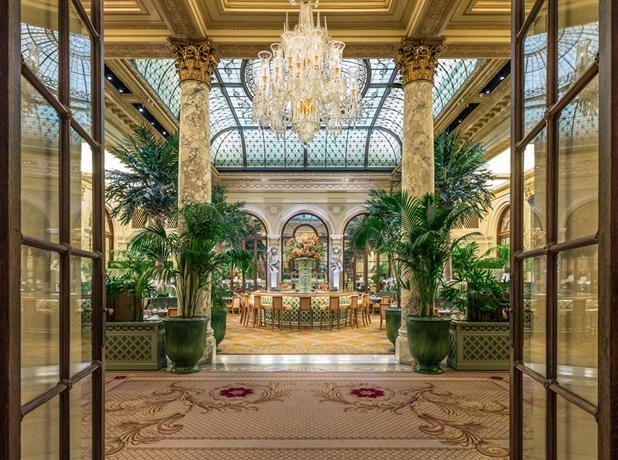 Established in 1907, The Plaza New York City has long been one of the best high-end hotels for discovering New York. This 5-star establishment looks out over Central Park and is situated within walking distance of The Museum of Modern Art, and Rockefeller Center. The Plaza New York City boasts comfortable rooms and luxury amenities including a ballroom, sauna, and butler service. Guests are invited for refreshments at Oak and dinner at Todd English while a wide array of options can be found nearby. The pinnacle of service and style, The Plaza New York remains one of the best high-end hotels in New York. 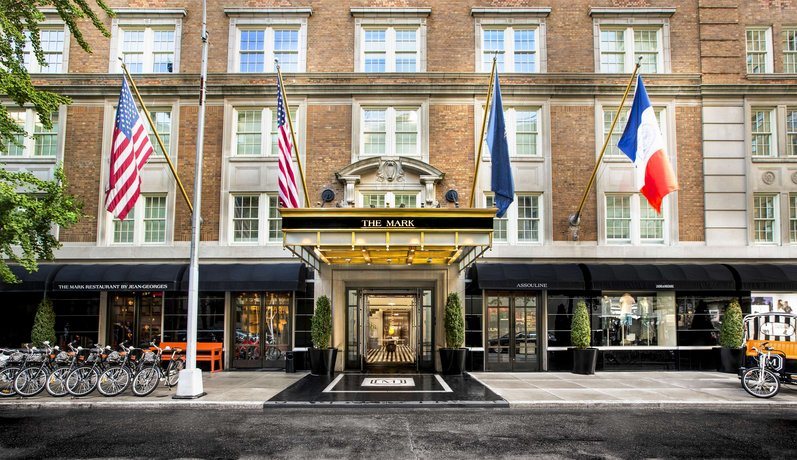 The Mark offers contemporary rooms with a classic feel in the heart of Manhattan. The 5-star hotel is a short stroll from Fifth Avenue, the Metropolitan Museum of Art, and other famous attractions. Guests will find a range of services at the Frederic Fekkai Salon and the spa and wellness centre. They can also enjoy a European-inspired meal at the in-house restaurant or al fresco terrace. 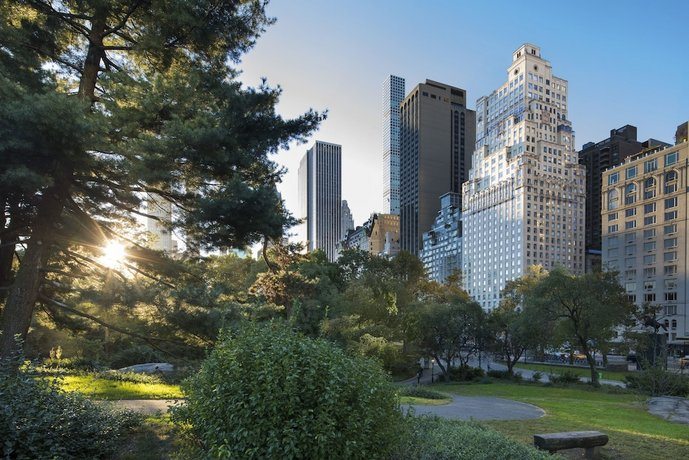 Overlooking Central Park, the Ritz-Carlton hotel offers 5-star accommodation in central Manhattan. High-end amenities include a fitness centre, sauna, and 24-hour room service. Each well-appointed room includes sophisticated touches such as flat-screen TVs and bathrobes. The hotel is situated close to popular shopping areas, the Museum of Modern Art, and New York City Centre. In addition to the many attractions and dining options in the surrounding area, guests can also opt to dine at the Ritz-Carlton’s restaurant and lounge bar. With the reputation that precedes it, it’s no surprise that the Ritz-Carlton is amongst the best high-end hotels in New York. 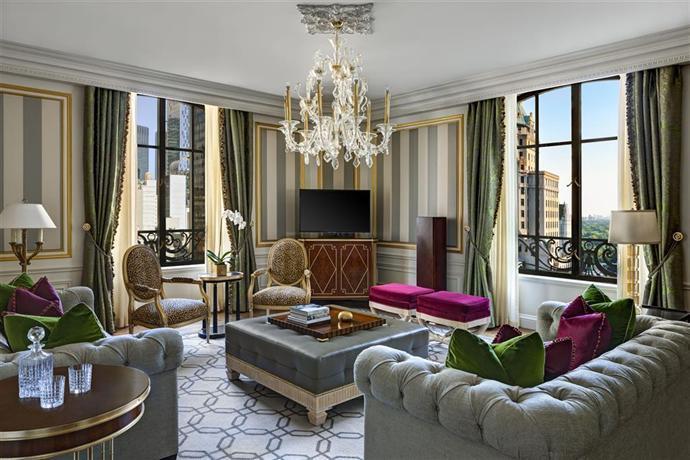 The St Regis New York first opened its doors in 1904 and it has earned its reputation as one of New York’s most stunning high-end hotels. Luxury amenities include a Turkish steam bath, butler service, and 24/7 room service. Sophisticated rooms offer respite to guests visiting nearby attractions such as Central Park, the Museum of Modern Art, Rockefeller Center, and Studio 54. 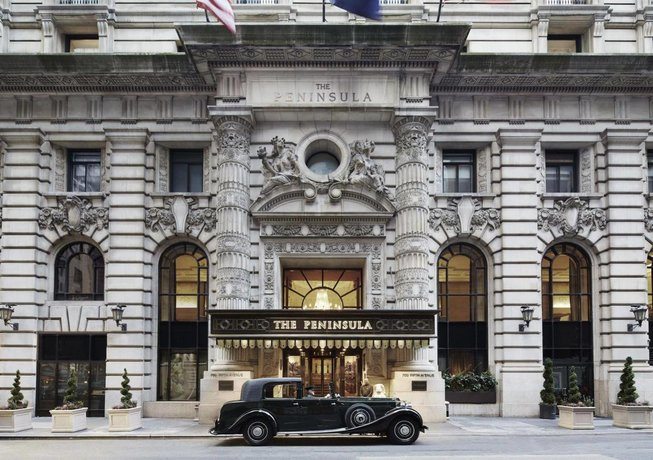 Situated adjacent to Central Park, The Peninsula New York offers a sophisticated base close to Manhattan’s main attractions. The hotel’s contemporary amenities include an indoor pool, sauna, and sun terrace. The Peninsula New York also prepares a daily breakfast to ensure the perfect start to each day. After exploring the local sights, guests are invited to dine at Clement Restaurant and wind down at the lounge bar. 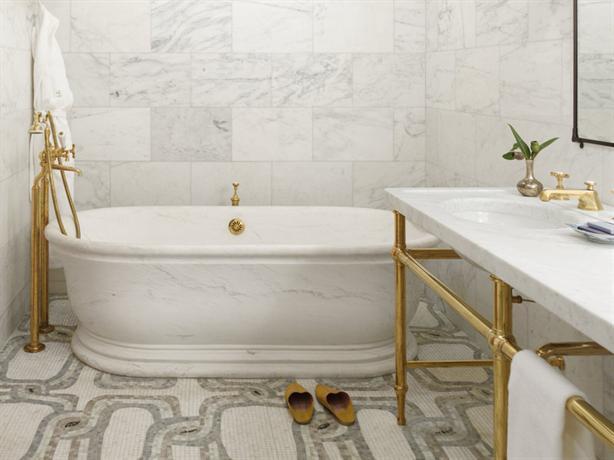 Located in the centre of New York, this contemporary 5-star hotel has all the ingredients for an incredible stay. High-end amenities include a spa and wellness centre, massage services, and an indoor pool. Each cozy room provides a laptop safe, iPod docking station, and bathrobes. Guests are invited to enjoy a meal at the on-site restaurant or in one of the many surrounding establishments. Those wishing to curl up with a book can do so at the hotel library, making The Greenwich stand out amongst some of the best high-end hotels in New York City. 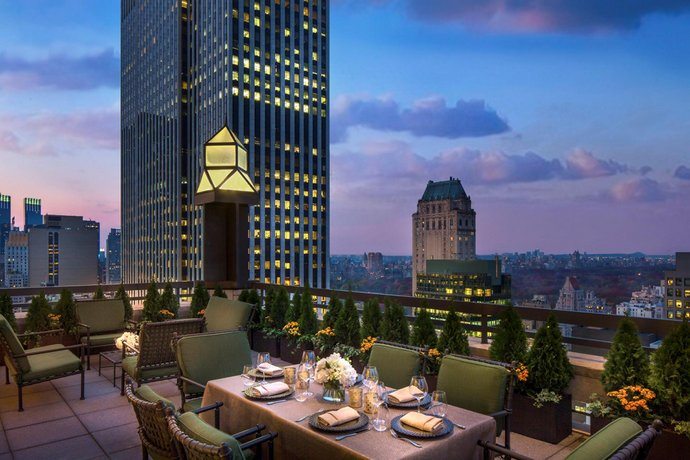 Soak up stunning Central Park views from an outdoor terrace perch at the Four Seasons Hotel New York, one of the best high-end hotels in NYC. This stunning 5-star accommodation is centrally located amidst top-rated sightseeing attractions like the Rockafeller Center and Carnegie Hall. Guests at this Four Seasons Hotel are invited to enjoy luxury amenities such as the L.RAPHAEL Beauty Spa and The Garden restaurant. 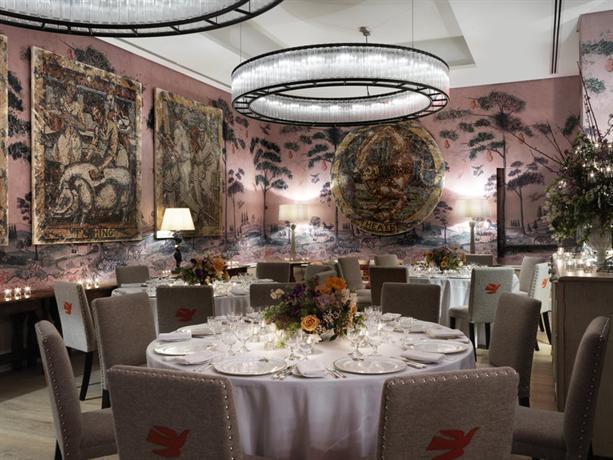 The Whitby is a chic boutique hotel in central Manhattan ideal for those who enjoy bold and bright design. The 5-star accommodation offers well-appointed rooms, massage services, and an outdoor terrace. The hotel is walking distance to Central Park and the Rockefeller Center while proximity to 57th Street (IND Sixth Avenue Line) Subway Station allows for easy exploration further afield. 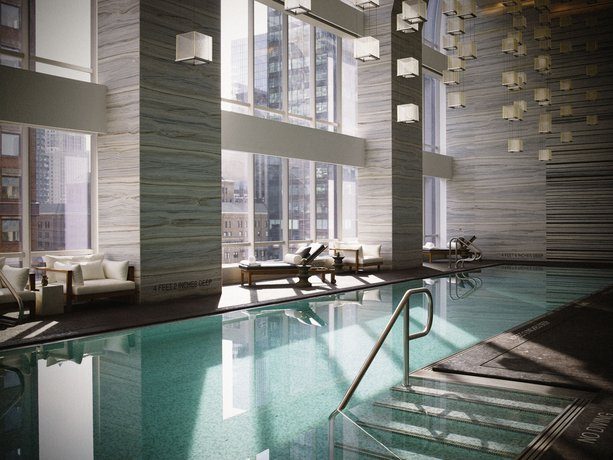 Seeking a high-end hotel close to Broadway? Look no further than the Park Hyatt, which is easily one of the best high-end hotels in New York. This modern 5-star hotel features sophisticated rooms and top-of-the-range amenities including an indoor pool and fitness centre. Hotel services include express check-in/check-out, a currency exchange, 24/7 reception, and babysitting. The Museum of Modern Art and Central Park are also a stone’s throw away from this high-end New York hotel. 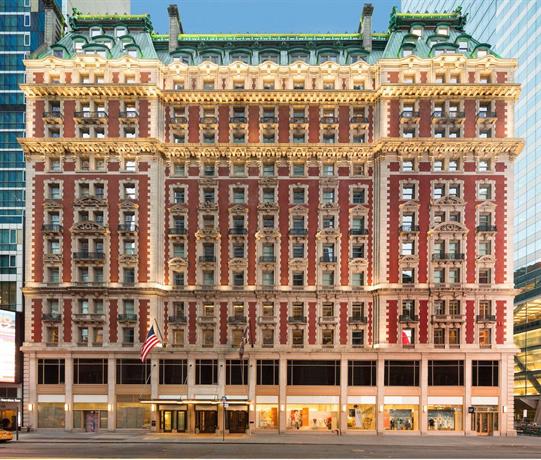 This historic 5-star hotel is ideal for those wishing to be close to Times Square and Broadway. While the exterior gives off a Grand Budapest Hotel vibe, guests at The Knickerbocker will find luxurious rooms and modern amenities. Guests can make use of a coffee bar, tour desk, and fitness centre. American, Continental, and à la carte breakfast options are served daily at Jake’s while lunch and dinner can be enjoyed at Charlie Palmer. 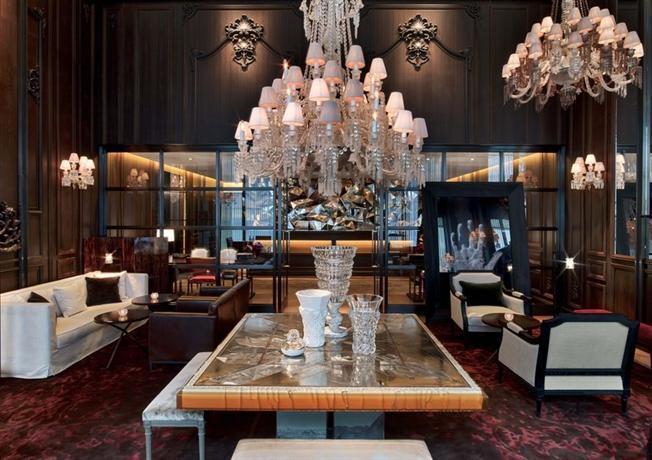 Baccarat Hotel and Residences offers sophisticated accommodation near New York’s central attractions. Guests at the 5-star hotel will find luxurious rooms equipped with slippers, coffee-making supplies, and all the essentials for a relaxing stay. The hotel features an indoor pool, complimentary WiFi, and an on-site bar and restaurant. Those wishing to explore can find The Museum of Modern Art, Times Square, Bryant Park, and public transport all within walking distance.

If you’ve always dreamed of splashing out in NYC, perhaps it’s time to treat yourself. Start by booking one of the best high-end hotels in New York and let the rest fall into place as the city works its magic for you.

*All prices quoted in USD.

Daily Hive has an affiliate partnership with Kayak.com and its subsidiaries.