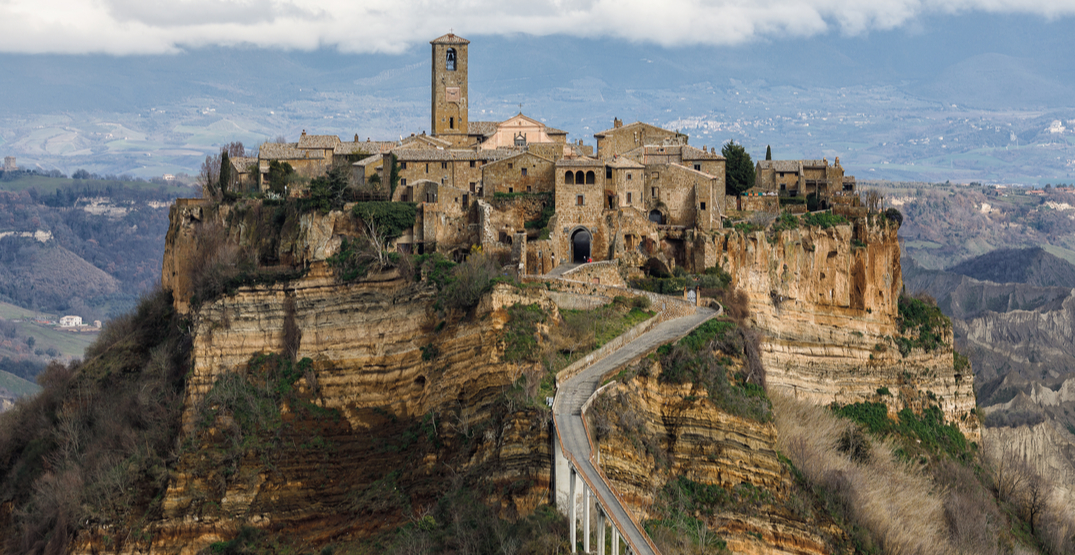 If you are planning to visit Civita di Bagnoregio, also known as “The Dying City” in Italy, you better be prepared to break out your wallet.

Those wishing to venture to the picturesque destination will be charged €5 ($7.25 CAD) on weekends and €3 ($4.35 CAD) on weekdays with the money going towards “preserving the remaining buildings and holding back the tides of erosion.”

Located in Tuscia on the border between Lazio and Tuscany, Civita di Bagnoregio’s main claim to fame is the fact that it is disintegrating bit by bit and falling into the valley below.

That’s right. The city is, quite literally, falling apart.

Are you thoroughly confused? Let us explain.

According to the Civita di Bagnoregio website, “The main entrance is a huge stone passageway, cut by the Etruscans 2,500 years ago when Bagnoregio was Bagnorea.”

Throughout the Middle Ages and Renaissance era, the town was very prosperous.

However, all good things must come to an end, and on June 10, 1695, Civita was struck by an earthquake, causing it to separate from the two other sectors of Bagnorea, Mercato — known today as Mercatello — and Rota.

The separation occurred due to the formation of a gigantic cliff produced by the earthquake.

“That earthquake signalled the beginning of a mass exodus from Civita di Bagnoregio,” the website states.

“The town was never the same, and in the centuries that followed, more and more pieces of the cliff eroded away, taking any buildings with them into the abyss.”

Thus, Civita gained the nickname of “The Dying City.”

However, all was not lost.

Civita di Bagnoregio has since become a massive tourist destination in Tuscia, with thousands of travellers journeying there to see what remains of the city.

“Civita di Bagnoregio will inevitably disappear when the final pieces crumble into the spectacular Valle dei Calanchi below,” the website explains.

“Knowing this and knowing that nothing can be done to prevent it makes your visit all the more special and… macabre.”

But the city isn’t dead yet.

Tourists still travel from all over to see what is left as well as witness the traditional festivals hosted there.

Visitors can indulge in awe-inspiring valley views and wander through the charming streets and piazzas that have earned Civita di Bagnoregio the title of a “Borgho più bello d’Italia” (One of Italy’s most Beautiful Towns).”

One significant thing of note, however, is that the city is only accessible on foot.

According to the website, “Supplies are mopeded in, while the rest of us must walk the rather long and tiring footbridge that connects the town to the parking lot back on the ‘mainland.’”

An entry fee is — literally and figuratively — a small price to pay to take in one of Italy’s most stunning and fleeting wonders.

If you would like to purchase a city to visit Civita di Bagnoregio, you can do so online.