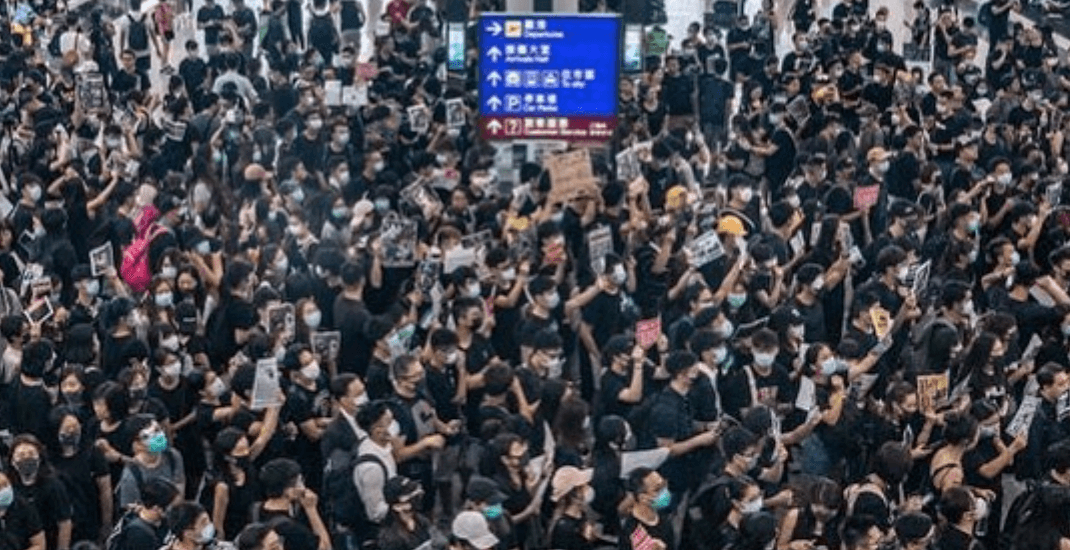 All flights at Hong Kong International Airport have been cancelled after thousands of pro-democracy protesters held demonstrations in the airport’s main terminals.

According to the Hong Kong International Airport website, all airport operations have been “seriously disrupted” and “all flights have been cancelled.”

“All passengers are advised to leave the terminal buildings as soon as possible. Affected passengers please contact their respective airlines for flight arrangement.”

According to the Hong Kong Free Press, demonstrators conducted a sit-in protest against police use of tear gas and shooting bean-bag guns at civilians during previous demonstrations. This is the fourth-straight day of protests at the airport.

The Hong Kong Police Force defended its actions stating that officers “deployed tear gas and minimum force to disperse the protesters” over the weekend.

Having given repeated warnings to the protestors but in vain, the anti-riot Police officers have deployed tear gas and minimum force to disperse the protestors.

The Chinese government says the anti-government protesters retaliating against authorities showed “signs of terrorism” and encouraged the city’s police force to continue its “crackdown on ‘rioters,'” according to the South China Morning Post.

Last week, the Government of Canada issued a travel advisory for Hong Kong, warning travellers to “exercise a high degree of caution” due to ongoing large-scale demonstrations.

“Although many protest sites are made public in advance, authorized and unauthorized demonstrations can take place with little or no notice. They can quickly spread to surrounding areas, including those frequented by tourists. Expect road closures and disruptions to traffic and transportation in affected areas. During recent protests, bus routes, MTR stations, the Airport Express and the Hong Kong-Macao Ferry Terminal have temporarily suspended operations without warning. Businesses may also close suddenly.”