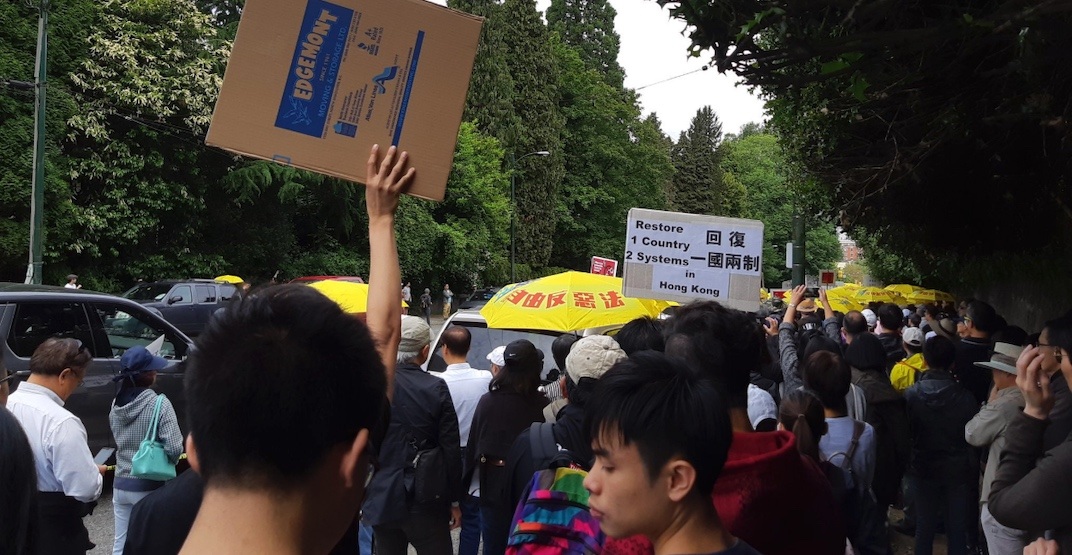 At least several hundred people were outside Vancouver’s Chinese Consulate on Sunday, rallying in solidarity with Hong Kong citizens against a proposed extradition law with Mainland China.

The Vancouver protest on Granville Street in the Shaughnessy area occurred on the same day an estimated 1.03 million people in Hong Kong took over the streets, in an act of defiance against new legislation that would allow anyone in the former British colony — Hong Kong citizens, Mainland Chinese citizens in Hong Kong, and any foreigners, including Canadians — to be sent to China to face trial under Mainland Chinese law, if they are accused of any crime.

According to the Hong Kong Free Press, this was by far the largest protest in Hong Kong since the colony’s 1997 handover to Chinese sovereignty — larger than even the Umbrella Revolution protests of 2014, and with participants coming from a wide spectrum of society.

Sunday’s estimated protest attendance was equivalent to a staggering one-in-seven of Hong Kong’s population of over seven million people. There were also some clashes between lingering protesters and police later in the day after the main protest had dispersed, leading to arrests.

Under a “one country, two systems” principle, Hong Kong was granted limited autonomy over a 50-year period as a condition of Britain’s surrender, with the former colony’s norms, free market economy, independent and separate judicial system, and basic freedoms and rights being retained.

If the new legislation passes later this month, critics say the new law could be used as a tool to control any dissent in Hong Kong. It has been seen as a severe affront to Hong Kong’s autonomy, and if passed it could impact the city’s business climate.

Despite the scale of the protests, Hong Kong officials — supported by the Community Party in Beijing — have said they will not back down on the extradition law plans.

The Vancouver gathering to express solidarity with the #antiextraditionmarch in Hong Kong; around several hundred supporters crowding around Chinese Consulate on Granville St #反送中 #反送中大遊行 pic.twitter.com/YcyPgcb8ED

Cameras and sensors at the Chinese Consulate in #Vancouver today. peeking out at free demonstrators rallying against the #hongkong #extraditionlaw #TotalitaranChina #surveillance pic.twitter.com/7DIz4UYkJa

Protesters against the Hong Kong-China #extraditionlaw are reflected in the nameplate of the Chinese consulate general on Granville St, #Vancouver @SCMPNews pic.twitter.com/s6F5Ys15lF

A few hundreds of ppl gathering tgt in front of Chinese consulate in Vancouver, showing their support for ppl in HK who are against the proposed extradition bill. Organizers broadcasting “Hold up to umbrellas”, a song that was created during the umbrella movement. pic.twitter.com/0SjBuwMq1n