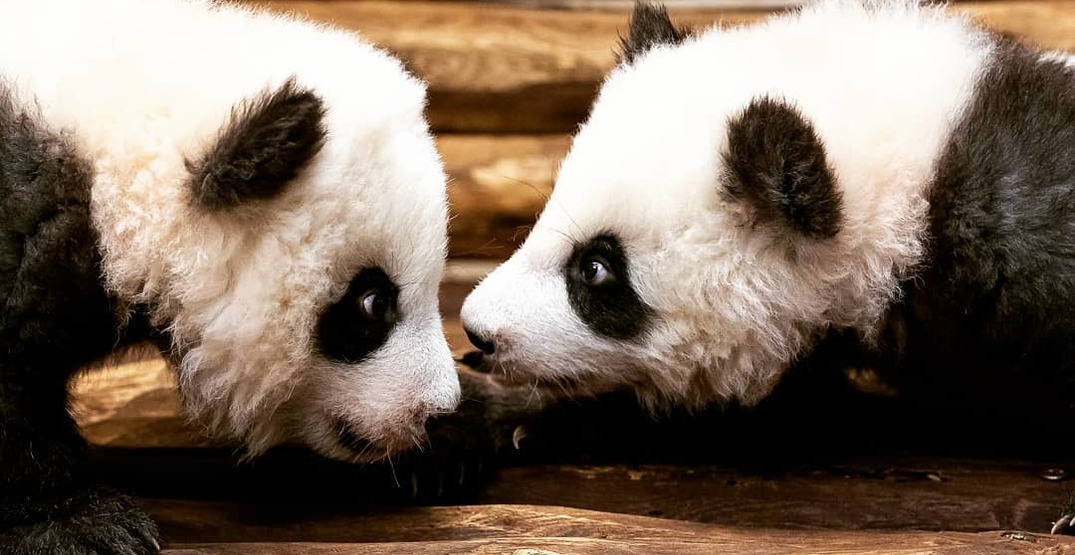 The world aww’d in unison when Germany unveiled photos of the country’s first pair of baby pandas at Berlin Zoo.

The cubs, born to six-year-old female panda Meng Meng and nine-year-old male Jia Qing on August 31, 2019, made their first steps outdoors in their official public debut on Wednesday.

“Pit (Meng Xiang) uses his sharp claws to drag his fluffy round body along the thick branch that leads to the bathing pool filled with bark mulch,” the zoo explains of the cubs first outdoor outing on their blog.

“His brother Paule (Meng Yuan) is waiting for him, and greets him with a playful chomp into his fur — that’s how panda cubs express brotherly love.”

The twins ventured out with mother Meng Meng, and since it was a success, the panda family is now finally available for viewing to visitors.

In the blog post, the zoo expresses its appreciation for the entire team that has been taking care of these adorable balls of fluff.

Those acknowledged include the keepers, vets, biologists, and those who contributed to the successful breeding of the bears at the Berlin Zoo.

The two boys can be seen enjoying some downtime on their wooden climbing posts. However, their favourite activity seems to be play fighting with each other.

Additionally, though they enjoy spending time together, they have developed quite different personalities.

Pit (Meng Xiang) is described as “laid-back, dreamy, and always ready for a nap.”

He is the older of the pair by an entire 48-minutes but expresses no interest in taking charge when it comes to exploring.

However, he is not a pushover. If his brother is getting too rough, Pit will make it clear with a “loud yelp.”

Contrastingly, Paule (Meng Yuan) is a “lively little fellow known for his mischievous, inquisitive nature. For him, no rock is too high to climb and no nook too small to sniff at.”

His short snout resembles that of his mother’s, and he is a unique and curious little explorer.

Without further ado, behold the cuteness:

Since August, the baby panda cubs have grown their signature black and white fur, gained weight, and opened their eyes.

“There are only 1,864 adult pandas currently living in their natural habitat,” notes veterinarian and Zoo and Tierpark Director Dr. Andreas Knieriem in one of the first blog posts about the new babies. “As a result, every single new cub represents an important contribution to the conservation of the species.”

The healthy progression of the cubs’ growth bodes well for the species as a whole.

“Despite their exalted status and relative lack of natural predators, pandas are still at risk,” the World Wildlife Organization (WWF) reports. “Severe threats from humans have left just over 1,800 pandas in the wild.”

Zoo Berlin is a massive advocate for the preservation of giant pandas and is passionate about saving them in their natural habitat.

They play an active role in assisting the Chengdu Panda Base — located in Sichuan, China –by supporting breeding programs as well as connecting and expanding protected environments.

To date, over 200 panda cubs have been born at the base — including Jiao Qing and Meng Meng.

In the long-term, their goal is to release the bears into protected reserves in China.

It wouldn’t be hard to get attached to these adorable little munchkins. However, the zoo must eventually send them back to their native China.

They will remain in Berlin with mama Meng Meng for four years until they have been fully weaned.

Meng Meng and Jiao Qing are also only at the zoo temporarily as a result of a 15-year loan agreement worked out by Chancellor Angela Merkel with China in 2017.