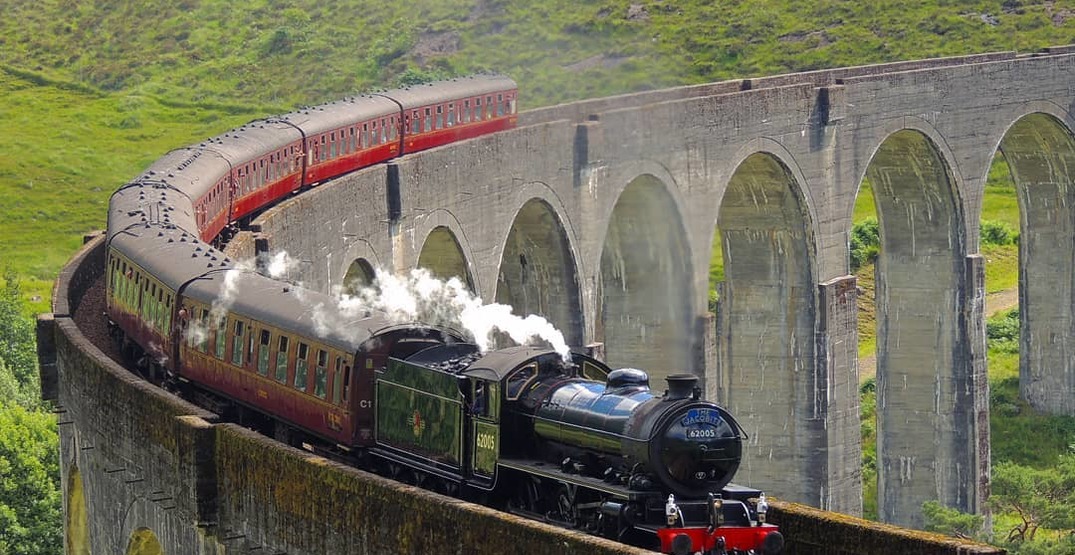 Some of us are still waiting for our letters of acceptance to the illustrious Hogwarts School of Witchcraft and Wizardry.

While you wait, however, you still have the opportunity to visit the enchantingly magical destinations that brought the mystical world of Harry Potter to life.

Whichever way you choose to go about it, whether it’s climbing aboard your trusty Nimbus 2000, practicing your apparition charms, or grabbing ahold of your Portkey, Lonely Planet has created a list of destinations for ultimate Potterheads to visit.

Hop aboard the Hogwarts Express – Scotland

Nothing will get Harry Potter fans more excited than the vision of the classic red and black motif of the Hogwarts Express chugging across the Glenfinnan Viaduct in Inverness-shire, Scotland.

It’s a symbol of new hope, possibility, and adventure.

Travel inside Scotland’s Jacobite Steam Train — the very same company that provided the steam engine and carriages portrayed in the films — as you admire the expansive countryside.

The journey is a 135 km round trip that transports you to various picturesque landscapes, including Loch Shiel, which was the scene of Hogwarts’ chilling Blake Lake.

Venture behind the scenes of the movies – United Kingdom

If you’re looking to go on the ultimate film lover’s adventure, the Warner Brothers Studio Tour, 32 km outside of London, United Kingdom, is “the ultimate experience for any Harry Potter fan,” according to Lonely Planet.

From show-stopping special effects to the iconic props and costumes, you can see firsthand the various elements utilized by the visionary team to create the magic behind the movies.

“Poke your nose into the Gryffindor common room, wander the foggy Forbidden Forest or marvel at the splendour of Gringotts Bank before grabbing yourself a bubbling butterbeer and hitting the gift shops for an astounding array of Harry Potter merch,” the list states.

Explore the shelves of Livraria Lello bookshop in Porto, Portugal, and be transported to a boutique straight out of Diagon Alley.

The interior — covered top to bottom with an assortment of excellent books — combined with the enticing light shed by the stunning stained-glass ceilings creates a magical charm and warmth.

Perhaps the most noteworthy and unique feature is the scarlet staircase that “winds like a two-headed snake” to the mezzanine level of the store.

It’s no wonder that such an atmosphere inspired J.K. Rowling while she worked in Porto, teaching English from 1991 to 1993.

Watch the magic come to life on the big stage

We have all come to know and love the seven books associated with the Harry Potter series.

However, the eighth installment is brought to life in the wildly successful stage production, Harry Potter and the Cursed Child, currently with productions in London, Hamburg, Melbourne, New York, San Francisco, and Toronto.

The story portrays the experience of Albus, Harry’s youngest son, as he is burdened with the pressure associated with his family’s legacy.

Those who have followed the series will recognize some familiar faces in this production.

Spend the night in a magical setting – United Kingdom

Have you ever wondered what it might be like to spend a night in a real Hogwarts dorm?

Wonder no longer! You can stay at London’s Georgian House Hotel and get the real experience.

It may appear muggle on the outside. However, in the interior, “concealed behind a bookcase down a portrait-lined passageway, you’ll find the spell-binding Wizard Chambers.”

London is also home to Platform 9 3/4 at the infamous King Cross Station, where you can capture a photo of yourself about to run through the wall.

With four wonderful and whimsical locations around the world in Orlando, Los Angeles, and Osaka, Japan, there is ample opportunity to visit at least one Universal Studios’ Wizarding World of Harry Potter.

Have the wand choose you at Ollivanders in Diagon Alley, quench your thirst with a delicious butterbeer at Three Broomsticks, and embark on the various rides to fully immerse yourself in the experience.

If you’re visiting Orlando, specifically, to journey between the two parks between Diagon Alley and Hogwarts and Hogsmeade, you can hop aboard a replica of the Hogwarts Express.

The stunning 14th-century architecture of the Alnwick Castle in Northumberland, England, has provided iconic settings for many blockbuster Hollywood films for fifty years, including Star Trek, Transformers, Downton Abbey, and, of course, multiple Harry Potter films.

You may find the Inner Bailey familiar from when Ron and Harry crashed the flying Ford Anglia. Perhaps the Lion Arch may have caught your eye as it looks oddly similar to trips taken to Hagrid’s hut.

Potentially the most recognizable is the Outer Bailey, where Harry receives his first flying lesson from Madam Mooch.

Now, visitors can participate in daily broomstick training sessions in the same location as well as additional Potter-themed activities.

It may not technically be a Harry Potter-themed school, but the College of Wizardry at Czoecha Castle in Poland is basically as close as you can get to the real deal.

According to Lonely Planet, “This epic live-action role-play has you spend three nights at the 14th-century castle under the guise of your pre-assigned wizarding character.”

Visitors are sorted into one of five houses — Faust, Molin, Sendivogius, Durentius, and Libussa — and spend their days participating in various magical activities including meeting magical creatures, listening to alchemy lectures, and exploring the hidden passages of the castle.

If you were ever envious of the delectable culinary spreads portrayed in the Great Hall of Hogwarts, you will love this Harry Potter-themed cooking class.

Conducted at the Belfast Cookery School — which has fashioned its kitchen to appear just as that of the Great Hall — you will obtain the skills necessary to conjure up treats such as Pumpkin Pasties as well as Harry’s favourite dessert, treacle tart with vanilla ice cream.

Hang out with Hedwig – England

The magical creatures created by J.K. Rowling were absolutely crucial to the overall Harry Potter universe.

From three-headed Fluffy to Buckbeak to Thestrals, these creatures were characters in their own right and represented various symbolic and literal meanings.

One of the most significant throughout the series is Harry’s trusted owl, Hedwig.

According to Lonely Planet, you can get up close and personal with these enchanting creatures at the Herring Green Farm Falconry Centre in Bedford, England.

The centre hosts an annual “Harry Potter tea with owls” event to provide visitors with the opportunity to fly, handle, and interact with the birds — including the breathtaking snowy owl — before digging into a delicious tea and cake spread.