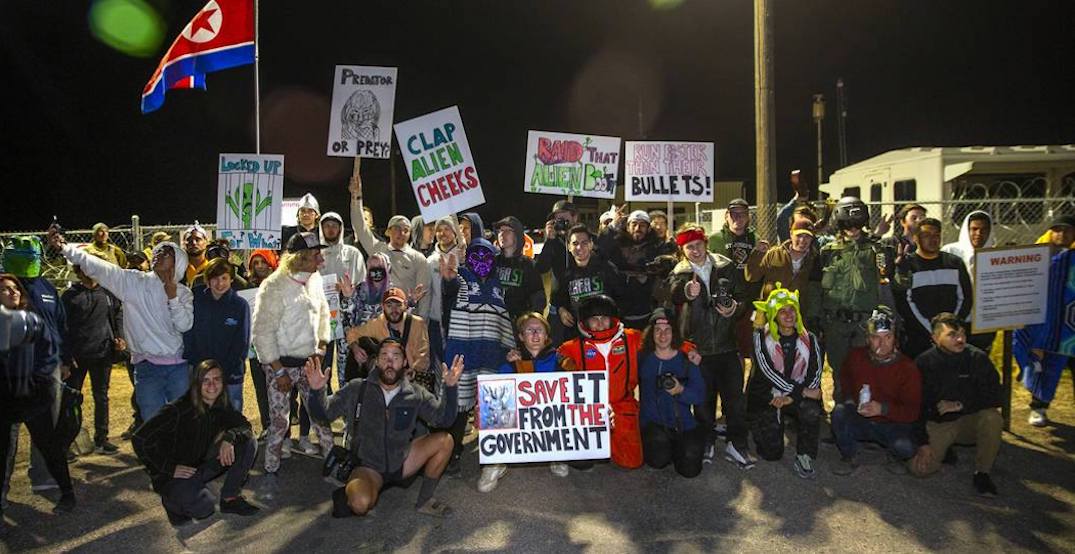 Storm Area 51, They Cant Stop All of Us/Facebook

The day that the internet had been patiently waiting for finally arrived, and thankfully, it ended up going quite differently than expected.

This past June, Matty Roberts, a 21-year-old California college student, created a Facebook event titled ‘Storm Area 51, They Can’t Stop All of Us,‘ which invited people to charge the base in large enough numbers to bypass security.

The supposed joke event urged people to raid the US government facility on Friday, September 20, and as you could imagine, it went absolutely viral.

Originally, millions of alien enthusiasts pledged to storm Area 51, the highly classified US Air Force facility in Nevada, on Friday. Instead, from images shared on social media, it looks like only a few hundred people showed up in surrounding areas.

While the original Facebook event post was taken down, alien enthusiasts still trekked out to the desert to spend some quality time with their fellow galaxy loving friends to enjoy the numerous events, including a music festival, planned around the base.

In photos shared online, you can see enthusiasts dressed up and holding placards and to be honest, the event ended up looking more like a hilarious party than anything else.

Take a look at some of the best shots from Area 51 this week below.

The Alien Research Center has a new sign up greeting visitors and one that reads ‘I stormed Area 51’ ahead of Friday’s Area 51 Basecamp kickoff. #stormarea51 #area51 pic.twitter.com/uar7I84Zqf

This about sums up the entire storm #Area51 event this weekend. pic.twitter.com/cK6cZ2SXDM

Gate photos which I had to release at base camp because there no longer any internet by #Area51 gate!

And yes that is Riley Reid, video is on my insta pic.twitter.com/YRhTwzhMlL

Well the area 51 raid is all weekend but instead they are having a music festival pic.twitter.com/vXw22tHlUQ

This Area 51 raid is a real life example of how life imitates art #Area51storm pic.twitter.com/xTnlQK8xOV

i cant believe our kids are really gonna read about the area 51 raid in their history books pic.twitter.com/1rlmSiuFT1

Margaret and Karen have been here since Tuesday. They say they caught themselves an alien. #AlienStock #Area51 pic.twitter.com/zC5VSEh1IU

Practicing my ‘naruto run’ to dodge bullets when we storm Area 51. Storming is set to happen tomorrow morning 3am #Area51 #StormArea51 with @elixirhere pic.twitter.com/kqejtvQCkc

Justin and Christopher are out here making tin foil hats for folks for free. A public service, Christopher tells me. #AlienStock #Area51 pic.twitter.com/VuySbOiX3R