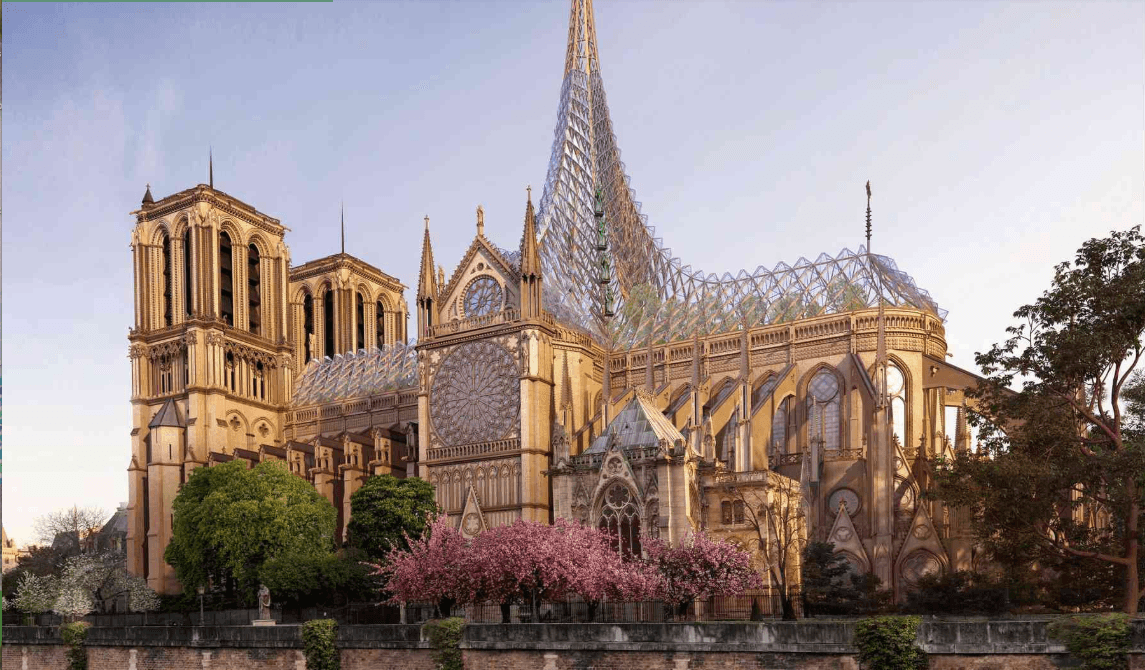 The whole world watched in horror as Paris’ iconic  Notre-Dame Cathedral was engulfed in flames.

As the Notre-Dame fire broke out on the evening of April 15, photos, videos, and messages of heartbreak flooded the internet. Some even recorded the very moment that the historic spire collapsed.

Though tragic and heart-wrenching, not all was lost. What remains intact after the fire leaves a glimmer of hope to restore the monument to its former glory. Notre Dame’s most precious artifacts — such as the Crown of Thorns and the 18th-century organ — were also miraculously unharmed.

The masterpiece cathedral was built up over centuries and on the night of the fire, French President Emmanuel Macron vowed that France would rebuild again.

“I’m telling you all tonight — we will rebuild this cathedral together,” Macron said at the smouldering scene of the fire. “This is probably part of the French destiny. And we will do it in the next years. Starting tomorrow, a national donation scheme will be started that will extend beyond our borders.”

The fund to rebuild Notre-Dame reached $1 billion in just 24-hours. Donations of all shapes and sizes have been made from companies, billionaires, multinationals, and private citizens.

On a recent trip to France, Trudeau announced that Canada is to contribute to the rebuild in the form of Canadian steel and lumber. Several Hungarian cities also intend to repay an age-old debt, as France made large donations to the city of Szeged after a devastating flood in 1879, Forbes says.

With the means to rebuild within days of the fire, France announced an international architectural competition to redesign the fallen spire.

To the dismay of traditionalists, Prime Minister Édouard Philippe said the competition could give the 850-year-old building “a spire suited to the techniques and challenges of our time.”

A number of interesting Notre Dame proposals have materialized since the open call and pitching a variety of ideas. Some of the worst ideas to be conjured up include circus, the world’s largest Louis Vuitton handbag, and a North American-inspired car park.

Luckily, architects around the world have proposed more realistic ideas. Here’s our roundup of the most intriguing to date:

Designer Mathieu Lehanneur has proposed a gleaming 300-foot carbon fibre flame. Just over a week after the incident, he reasoned, “Some say that we should rebuild the spire as it was originally. Others say that we should design a new one. So, let’s build a new one as it was… eight days ago.”

The idea was meant in protest of rebuilding the cathedral as was in the 19th century. He also adds that the flame is also a strong biblical symbol.

This Notre Dame proposal from Brazilian architect Alexandre Fantozzi of Aj6 STUDIO suggests a stained glass roof. His concept draws from existing architectural features found throughout the cathedral and weaves spiritual undertones into an elegant design.

In Gothic times, builders were preoccupied with reaching the sky. This very idea has inspired Vizum Atelier, a Slovakian design firm. He suggests that rather than rebuilding a new structure, a beam of light could shoot a new spire into the sky. It would be a “lighthouse for lost souls,” Michal Kovac told The New York Times.

Or maybe he’s been listening to too much Yeezy. 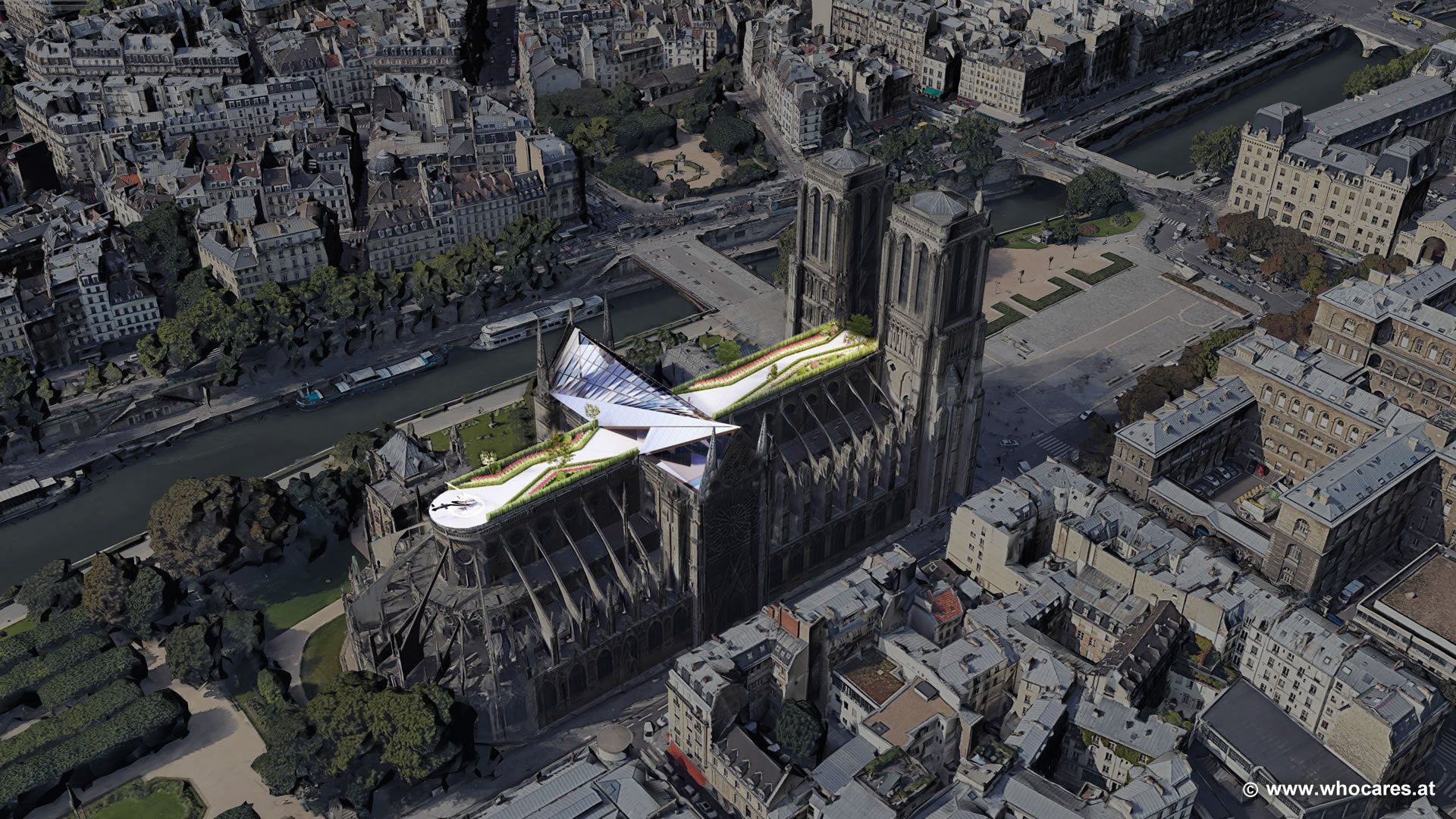 A render of Quasimodo’s Penthouse (Who Cares Design).

There will also be a helipad, ya know, just in case. 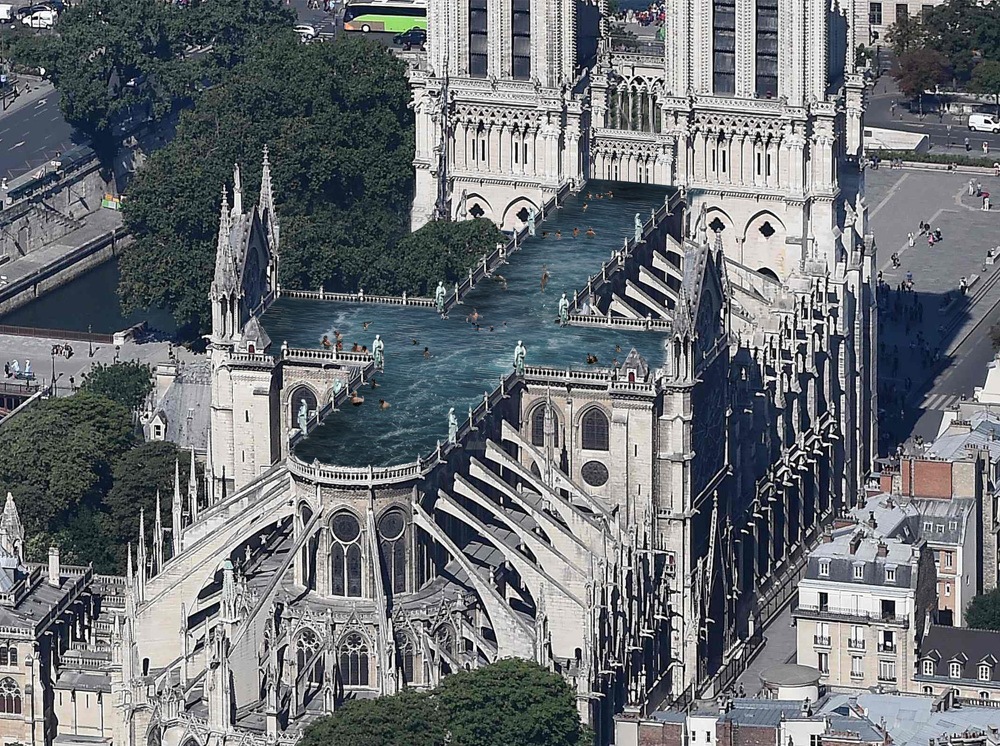 A render of Notre Dame with an outdoor public pool (Ulf Mejergren Architects).

Rather than a penthouse for one, Stockholm design studio Ulf Mejergren Architects (UMA) envisions a rather unique public space.

“Given that we’re in the epicentre of Paris, the world’s cultural capital, and a city filled with joie de vivre, we’re not planning on rebuilding the roof as it was,” their proposal states.

They propose ditching the spire altogether. “Instead we are proposing a meditative public space; a complementary spatial experience to the building with unmatched views over Paris.”

It would also be well-guarded by the 12 apostle statues that had been removed from the site for renovation and thus escaped the fire. 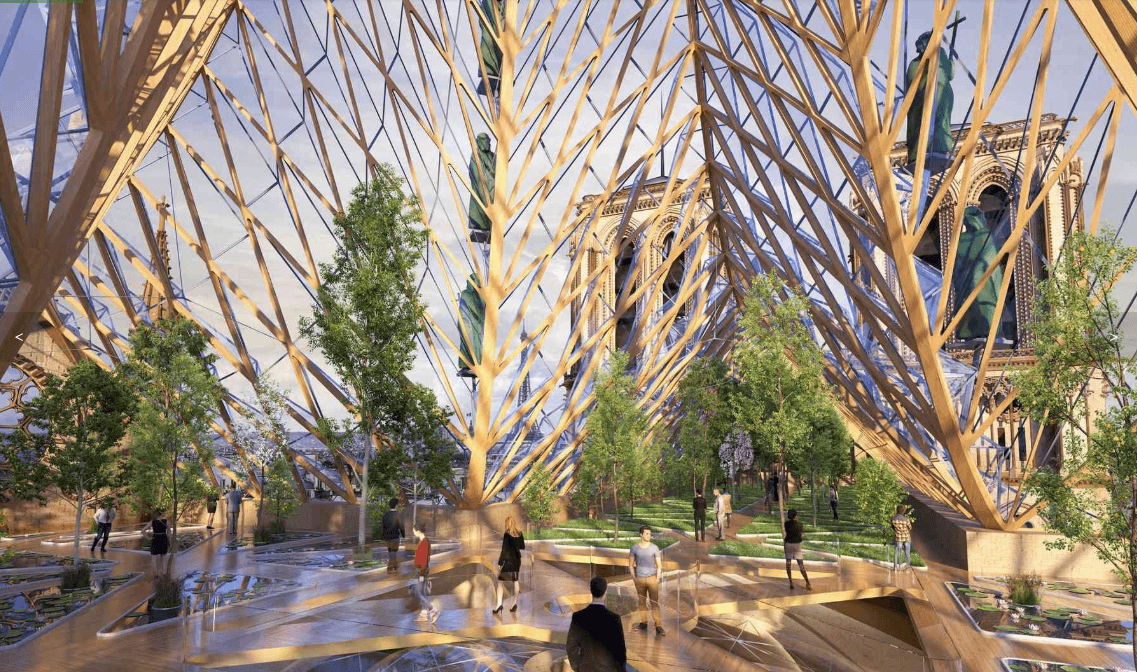 Palingenesis from the inside (Vincent Callebaut Architectures).

Vincent Callebaut Architects has an innovative vision for the cathedral. Their “Palingenesis project,” named after the Greek word for rebirth, aims to turn Notre-Dame into a green roof.

“Reflecting the all-spiritual splendour of our material and sacred heritage, this sublime lady has undoubtedly reminded us of the frailty of our life and our civilization,” their proposal reads.

“What is more, this powerful fire has awakened our dystopian imagination and somewhat echoed the Church’s current identity crisis, as well as the environmental challenges we are facing through climate change.”

They have designed an energy positive solution made of 3D crystal glass, oak, and carbon fibre that absorbs and transforms light into energy. Their urban farm design also features a rooftop garden that could hypothetically produce 21 tons of fruits and veg each year. The design also plans to let natural light shine through the roof and down to the once-dim choir.

Only time will tell as more Notre-Dame proposals flood in.