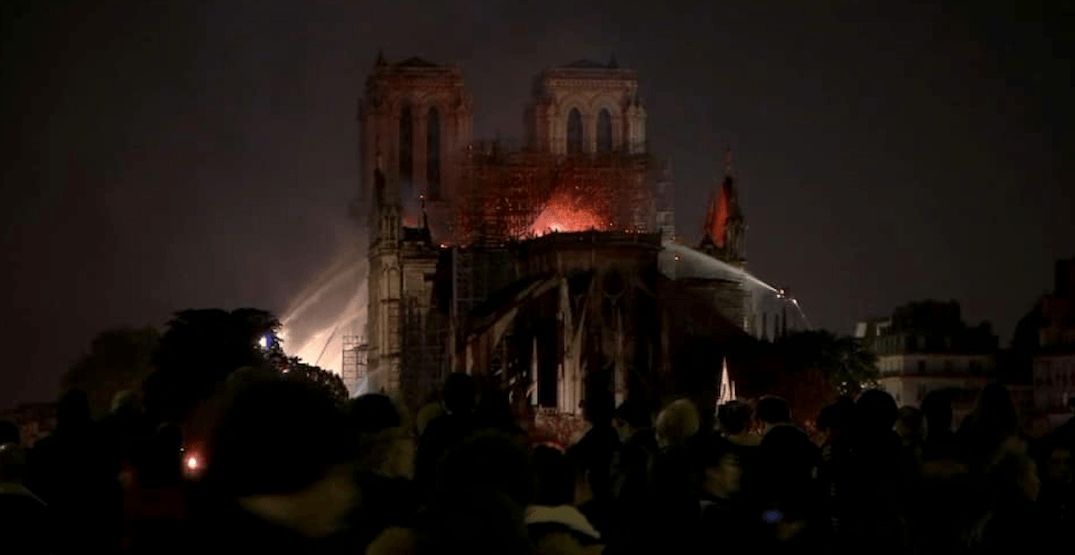 At approximate 6:50 pm in Paris, the Notre-Dame Cathedral caught fire.

As one of Paris’ most iconic landmarks and its most visited monument, Notre Dame is a treasured part of the city to both locals and visitors. Hearts were aching to watch the beautiful building in flames.

Locals typically enjoy taking in its views while sitting along the Seine, and visitors marvel at its views from both inside and outside, including iconic features such as its gargoyle sculptures and stained glass windows.

The fire started with flames and smoke billowing around the cathedral’s towers, and the inferno quickly spread across the building to shatter the windows, destroy the roof, and cause the iconic central spire to collapse.

Authorities were scrambling to contain the fire, but the cathedral’s fate was uncertain and audiences were sharing thoughts of their devastation both in person and online.

At around 11:00 pm in Paris, reports came in saying that the Notre-Dame Cathedral’s main structure would be saved.

As reported by CNN, both towers of the Notre Dame cathedral survived the fire, according to Laurent Nunez, France’s secretary to the interior minister.

“The fire is now weaker. We are now in a time of cooling but both towers of the cathedral are safe. We’re still working to save the cathedral’s work of arts,” Nunez told reporters at the scene.

One firefighter has been seriously injured, and two-thirds of the roof has been destroyed, according to the Paris Fire Brigade.

French President Emmanuel Macron has announced that, starting Tuesday, he will launch an international fundraising campaign to rebuild the Notre Dame Cathedral.

On the scene, Macron describes the fire as a “terrible tragedy,” but said the “worst had been avoided.” He added that the cathedral’s facade and two main towers did not collapse during the fire.

“I’m telling you all tonight — we will rebuild this cathedral together. This is probably part of the French destiny. And we will do it in the next years. Starting tomorrow, a national donation scheme will be started that will extend beyond our borders,” said Macron.

Crowds remain gathered outside the cathedral, praying and singing hymns.

A spokesman for the Paris firefighters says the two towers and the main structure of #NotreDame cathedral have been saved from complete destruction as the flames begin to wane. Three or four more hours needed to contain the fire, he addshttps://t.co/0i6BmX3xaO

If this image doesn’t make you feel something, you’re dead inside #NotreDame pic.twitter.com/nunznNUuYv

Drone footage of the #NotreDameFire shows the utter devastation. French officials now say that firefighters may not be able to save #NotreDame’s exterior walls and towers.😰#IncendieNotreDameDeParis pic.twitter.com/KxhT42zVyf

Truly saddening. Hundreds of years of history has gone up in flames in just hours. My prayers are with Paris at this awful time ❤️ #NotreDame pic.twitter.com/ZWgWtaeena

Just seems such a huge, heartbreaking fire. Hope nobody is hurt, first & foremost. And aside from that, as anyone who has visited knows, it’s such a stunning cathedral. #NotreDame pic.twitter.com/GSoySswJ3w

I have no words to describe what happens. I can’ belive this, Notre Dame cathedral is burning and firefighters are trying to stop the fire. This is a very painfull moment for all the Frence and I’m so sorry that this wonderful historical monument is destroyed.#NotreDame pic.twitter.com/ugy91adYaV