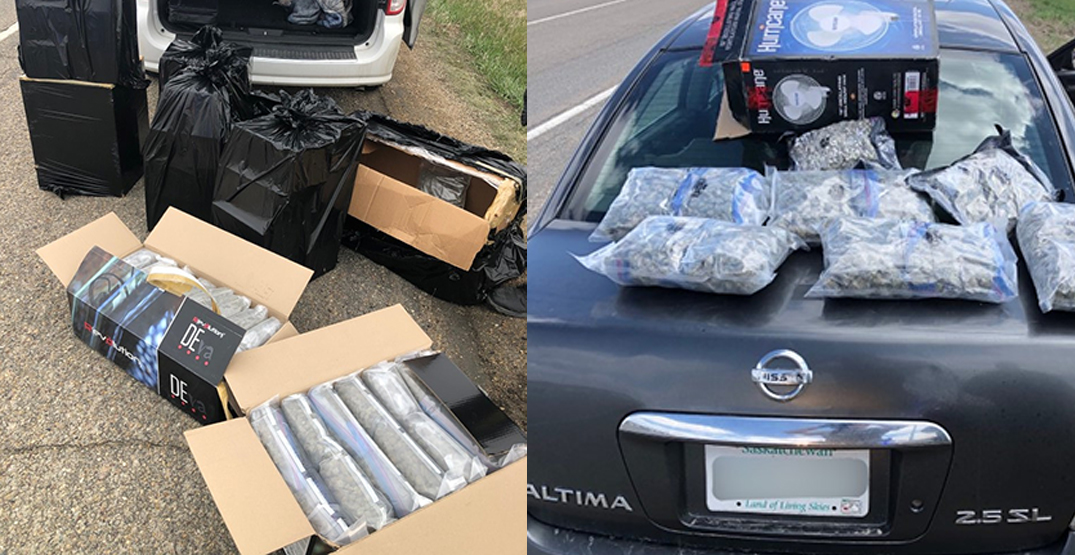 Anyone looking to transport large quantities of unregulated cannabis — and a Neapolitan of other illegal drugs — through a particular stretch of the Trans-Canada Highway near Swift Current, Saskatchewan, might want to think again, as the RCMP have made a trio of significant busts along the thoroughfare.

According to a release, Saskatchewan RCMP’s traffic unit has seized quantities of cannabis, cannabis edibles, fentanyl, cocaine, and untaxed cigarettes on the Trans-Canada Highway in less than a week.

On May 11, 2020, an eastbound vehicle with one male occupant was reportedly stopped on Highway 1 west of Swift Current for a sobriety check. The man was found to be in “possession of contraband tobacco and was subsequently arrested for being in possession of unstamped tobacco.”

Police say a search of the car followed and they located six pounds of cannabis and another small amount of unstamped tobacco.

The suspect, identified as 46-year-old Robert Glenn Smith from Regina, has been charged with possession of cannabis for the purpose of distribution.

Two days later, on May 13, law enforcement report stopping another single-occupant vehicle on Highway 1 west of Swift Current, this time for speeding. The man was found to be in possession of a large amount of Canadian currency and was subsequently arrested for being in Possession of Proceeds of Crime.

A search of the vehicle resulted in the seizure of 34 pounds of “cannabis marihuana” — marihuana? — and 1,500 packs of cannabis edibles.

The RCMP report having charged Richard Scott Maloney, 57, from Peterborough, Ontario, with Possession of Cannabis for the Purpose of Distribution, Distributing Illicit Cannabis, and Possession of Proceeds of Crime under $5,000.

That very same day, a westbound vehicle was stopped on Highway 1 west of Swift Current to “check for a valid driver’s licence.”

After finding another quantity of cash, a search of the vehicle netted the department a reported 8.5 pounds of cannabis edibles and a large amount of Canadian currency. The total amount was not disclosed.

The two men, Ivan Lee Knourek and Shawn Allen La Faver, both in their 50s and from Alberta, were charged with Possession of Cannabis for the Purpose of Distribution, Distributing Illicit Cannabis, and Possession of Proceeds of Crime over $5,000.

Following that, on May 14, an eastbound vehicle was stopped on Highway 1 west of Swift Current for another driver’s license, vehicle registration and driver sobriety check.

A man in the vehicle was found to be on court conditions, according to police, including the requirement for him to submit to a search by law enforcement.

“The two occupants of the vehicle were detained for drug investigations and a search of the vehicle took place,” police said in the release. “Ten grams of fentanyl, as well as quantities of cocaine and methamphetamine, were located in the vehicle.”

They report charging David John Glen Pelley (38) and Alexis Allison Helen McKay (30), both from Regina, with trafficking and drug offensives, as well as “numerous weapons and property-related offences.”

Pelley also faces five additional charges of failing to comply with his conditions, according to police.