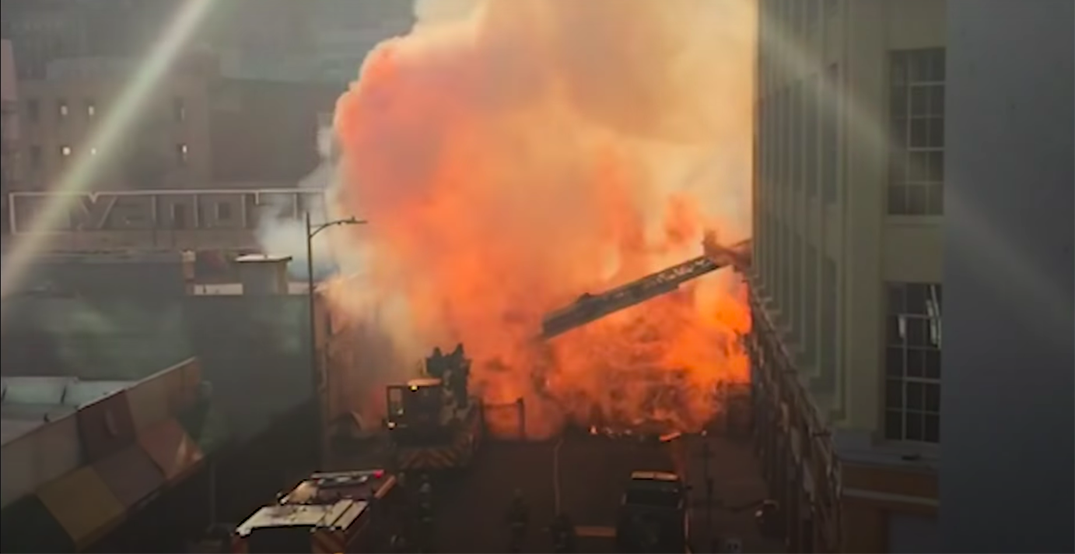 A daytime fire in Los Angeles’ Toy District that engulfed a rooftop fire crew in an explosion, injuring 11 members, has been linked to the illegal production of cannabis extracts.

According to a press release from the Los Angeles Fire Department, on Saturday, May 16, at 6:26 pm, the LAFD responded to a structure fire in a one-story commercial building at 327 E Boyd Street in the downtown area.

We are on scene at this major fire emergency in Downtown LA, that resulted in an explosion and mayday call, with initial reports of several firefighters injured. Please keep our brave @LAFD firefighters in your prayers. pic.twitter.com/5pW6lk2Tjl

“The businesses were not open at the time and firefighters had to force entry with power saws to make access,” the release states. “They immediately initiated an aggressive interior fire attack with hose lines, and a truck company was sent to the roof to perform vertical ventilation.”

Relief holes cut into the roof of burning buildings serve to vent thick smoke and gasses out of buildings. Smoke can make it difficult or impossible for emergency crews to navigate through burning buildings, and smoke is usually made up of unburned material that is still combustible.

Firefighters within the building reportedly “encountered increased pressurized smoke and heard a rumbling high-pitched sound.” Seeing that the situation was changing rapidly, the fire teams exited the building and the roof as the “situation rapidly deteriorated.”

As seen in a department video, a massive fireball enveloped the firefighters descending from the roof via an aerial ladder.

“The searing heat melted helmets, burned through protective coats and hoods and blistered and charred nearby fire apparatus,” the release states.

The department issued a Mayday call as 11 firefighters, all working at Fire Station 9 on Skid Row, were injured as a result of the blast.

According to the department, dozens of additional fire and paramedic resources were sent to the scene to assist with medical treatment and fighting the fire. The injured were rushed to LAC+USC Medical Center for treatment. By the following day, four of the injured had been released from the hospital. All are expected to survive.

One other firefighter was later treated and released at the hospital for a minor injury.

The LAFD reports that more than 230 firefighters were on scene and the blaze was declared extinguished shortly after 8 pm, one hour and 42 minutes after it was reported.

The area the fire took place in was said on social media to be the site of a smattering of unlicenced and unregulated cannabis businesses. The business that housed the fire has been identified by CBS CKAL, a local news network, as Smoke Tokes, an online seller of cannabis products, including, the report states, butane to other cannabis producers.

Butane is a highly flammable accelerant used in some methods of creating highly potent cannabis extracts.

Since the fire, the National Response Team (NRT) of the Bureau of Alcohol, Tobacco, Firearms and Explosives, along with ATF special agents from the Los Angeles Field Division, were activated to join the investigation of the fire.

“ATF is committed to working alongside Los Angeles Fire Department to determine the origin and cause of this fire that tragically injured firefighters,” said Special Agent in Charge of ATF Los Angeles Field Division Monique Villegas in a release from the agency. “ATF will provide whatever resources are necessary to thoroughly investigate and provide answers.”

Law enforcement says the NRT works in conjunction with other investigators to reconstruct the scene, identify the origin of the blast, and determine the cause of an incident.

California has legalized cannabis on a state level, though the drug remains illegal federally in the United States. Despite state law allowing for regulated cannabis extractions and retail, the business name and address do not appear on the LA Department of Cannabis Regulation’s Authorized Retail Businesses listing.

An Ontario man was recently arrested and charged after police said they found evidence he was producing cannabis oil in his home which led to a fire. The method used was not disclosed, but police in Stratford chose to arrest the resident and charge him with arson.