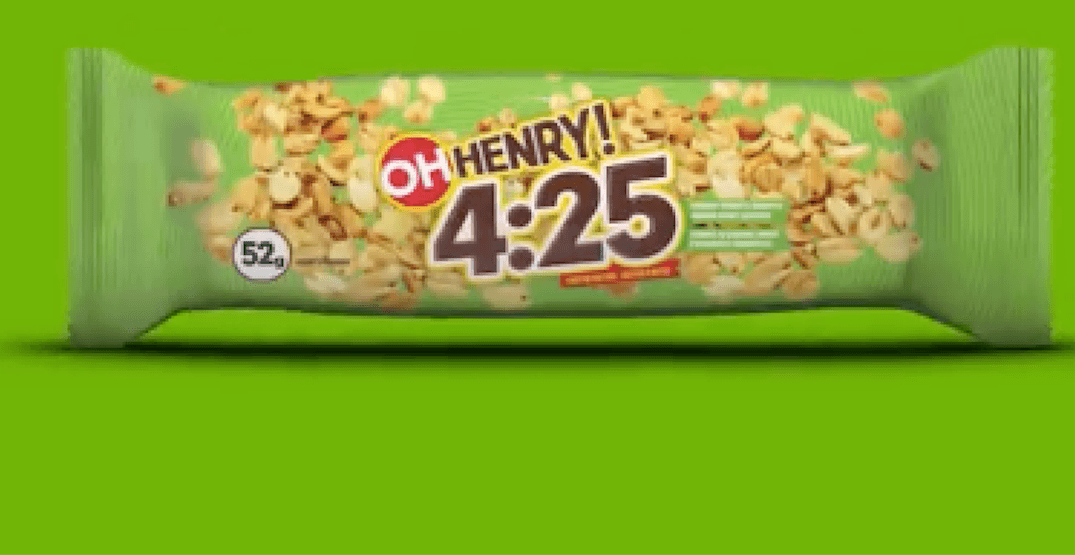 In light of the impending legalization of recreational cannabis in Canada this fall, Oh Henry! has announced it is launching what they’re calling the “4:25” bar this summer.

“Oh Henry! understands that with the legalization of cannabis comes new hunger needs to be met,” a product spokesperson told Daily Hive.

The company first announced back in April that it was planning to launch the new, limited edition product this summer and now it looks like those plans are coming to fruition.

Oh Henry! said the 4:25 bar takes its name from the hunger one feels five minutes after getting high and is “specifically formulated to satisfy the intense hunger craving that occurs after 4:20.”

While smaller in size than their original, the new bar – comprised of peanuts and caramel – has 7 gram of protein, versus 5 grams in the original.

As a result, the new bar is meant to leave consumers “feeling fuller when they need it most.”

The product will be available in gas stations and convenience stores across the country this summer, for a limited time, and while supplies last.

Consumers are being reminded that despite the name and perceived connection to the cannabis industry, the chocolate contains no illicit substances, and, while it is edible, it is certainly not an edible.

But could there be a cannabis-version of this product on the horizon?

“No, not at this time, but you never know what the future may hold for Oh Henry! 4:25,” the spokesperson said.