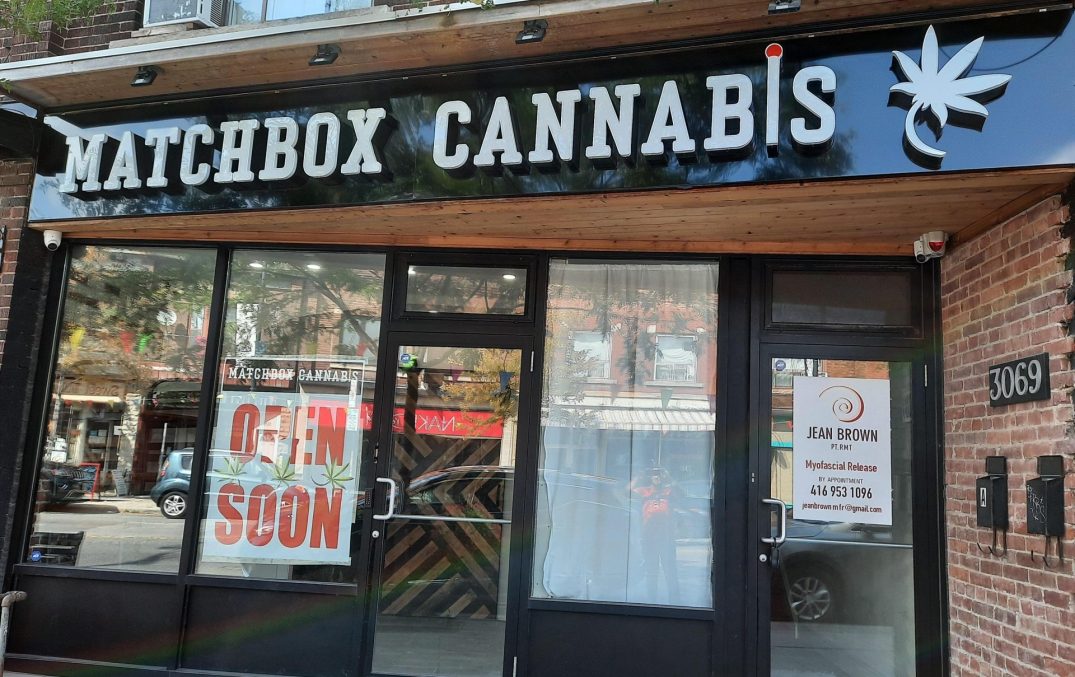 Cannabis retail in Ontario got off to a slower start than a lot of other provinces, but even after the end of a cap on stores and the lottery system, many businesses are left paying for costly overhead while awaiting authorization to open.

Tatyana and Vlad Parkanski have been trying to break into cannabis since legalization began. Coming to the industry with decades of combined retail experience, they spent years running a shoe store together before deciding to pivot to greener pastures when the Ontario Conservatives announced pot retail would be in the hands of private businesses.

The couple tells Daily Hive they’re ready to open the doors to Matchbox Cannabis shortly after receiving their retail operator’s license but without it, the Junction location at 3069 Dundas Street West only has an “opening soon” sign taking up residence in the window.

Their application is marked pending on the Alcohol and Gaming Commission of Ontario’s website, but despite being ready to proceed, they have no firm idea when the final inspection might be coming.

Until then, the couple is keeping the business afloat on the saving they accrued through their years in retail. Currently, they have been told the business could be waiting another 10 months until July 2021.

“We weren’t really aware that after pre-inspection, the final inspection will be months and months away,” Tatyana Parkanski said during an interview. “It’s just me and my husband. It’s not like we’re coming from a corporate background; this is our kid’s university funds.”

In March 2020, when the Ford government removed the cap on the number of private cannabis stores in the province and eliminated pre-qualification requirements for prospective retailers, it was meant to end what some saw as necessary measures to deal with a lack of supply, and others looked at it as an impediment to getting business off the ground.

When the changes were announced, the province estimated twenty stores could be certified a month. According to the AGCO’s online database, there are 588 applications listed as pending in Ontario at time of writing. At the predicted rate, it will take around two years for any new applicants to receive approval.

The irony now is that while the province once penalized businesses for not opening soon enough — lottery winners had two weeks to open before being penalized in intervals of $12,500 if they failed to open, eventually adding up to $50,000 — is now having retailers field increasingly expensive wait times.

The AGCO does not comment on specific cases, but did say in a statement to Daily Hive that they run a suite of checks as part of their assessments including police and background checks on applicants, and “persons interested in the applicant,” to determine eligibility for a licence.

“As such, I cannot provide you with an estimated date or average time for an application. Each store applicant is at a different stage of the licensing process,” a spokesperson told Daily Hive.

Referring to the procedure as “thorough and efficient” they added that a team of Compliance and Licensing officials work on multiple files and delays occur based on the “complexity of the file and if the AGCO requests additional disclosure information and must wait for a response.”

In the meantime, Matchbox has their hopes pegged on opening for business sometime in the new year, knowing that it will be costly.

“By our calculations, it will cost us upwards of an extra $100,000 just waiting to open,” Vlad Parkanski added. “That’s a very hard pill to swallow.”