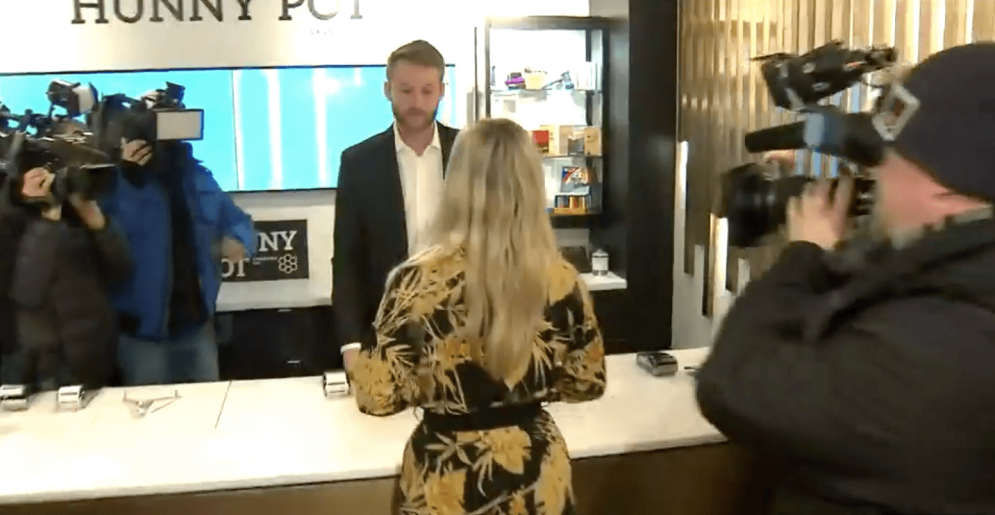 The Hunny Pot Cannabis Co., Toronto’s first — and currently only — legal cannabis store, opened its doors on Monday, April 1. The opening was replete with both media and customers, though one interview by a major Toronto news outlet featured the business’ PR rep.

A thread on the Toronto sub-Reddit page was quick to point out that the woman being presented by CP24 at the time, as the first customer, was actually an employee of the store.

According to the post, Reddit user iamnotgoogle noticed that the “so-called first customer was in fact an employee of the store.”

As first reported by Vice News’ Manisha Krishnan, the woman seen in the segment is Kate Johnny, a Public Relations Coordinator with Blue Door Communications. Grow was in contact with Blue Door prior to the opening, and Johnny was on site the day of, coordinating media and interviews with the store’s staff and owner.

The first customer not employed by The Hunny Pot was a young woman who had camped outside the store overnight.

During footage and in an interview shot with CP24 news anchor Brandon Gonez, Johnny is shown standing by the front of the store where she exits and then comes back into the establishment. Her ID is scanned at the cash register and she pays for the purchase.

During the interview portion with Gonez, Johnny said, “The Hunny Pot, this is the most beautiful store I have ever seen, they have put so much work into it, this was the best experience.”

There is no mention during the broadcast that Johnny was a member of the store’s PR team, though the article on the subject has since been updated with an editor’s note clarifying this point. The post still identifies Johnny as “the first customer,” and still includes her on-air statement to Gonez: “I’m going to go home, I’m going to grab a coffee and then I’m going to work because I have to get to the office, and then maybe enjoy some of this after the office.”

Johnny says that the choice to have her make the first purchase was to have someone involved in the business “kick off the day.”

“Please note all media that were in the store prior to opening were aware that we were part of the communications team and aware of the ceremonial transaction,” Johnny wrote to Grow, in a statement. “We announced it before it happened to everyone inside.”

The news station tells a slightly different version of events.

“During their live coverage of the store’s opening, CP24 interviewed a woman believed to be a legitimate customer,” CP24 spokesperson Renee Dupuis-Macht told Grow, in an emailed statement. “Soon after that initial interview, CP24 was informed that the store had pre-selected the customer to be onsite for media interviews, which the station clarified immediately by revising their script.

“At the time, CP24 was not aware that she was a publicist for the store. The story has been corrected online.”