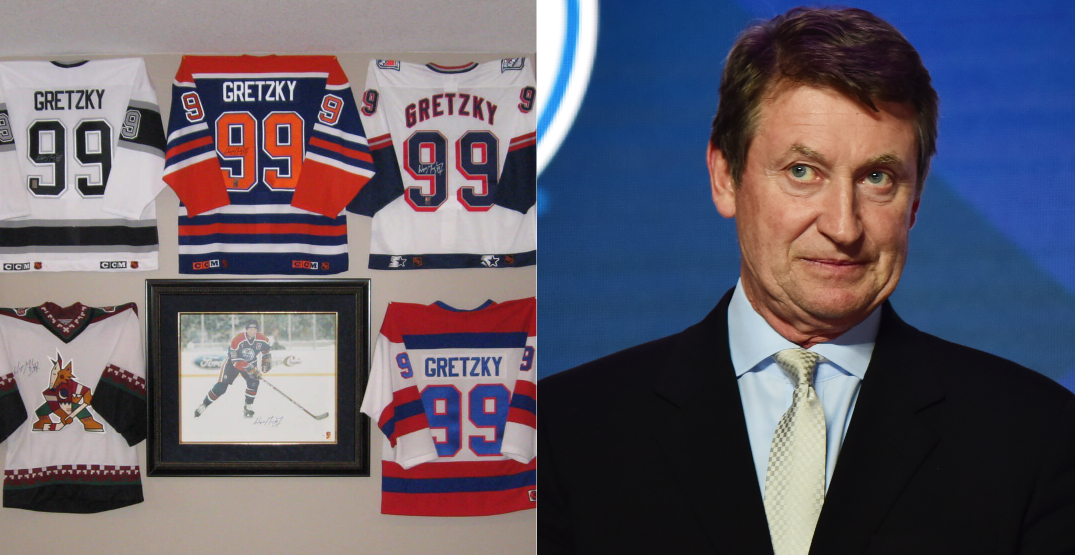 Chances are police aren’t calling this heist a great one.

A collection of Wayne Gretzky memorabilia featuring 19 autographed jerseys and almost 10,000 hockey cards have been stolen from a storage unit in northern Saskatchewan, Ahtahkakoop RCMP said in a news release.

The theft, reported on April 3 by owner Aron Gratias, occurred between November 2021 and March 2022 from a rural yard where the memorabilia was being stored temporarily.

“It pains me to have to write this, and very emotional to think about, a 40+ year passion, MY Gretzky Collection, stolen and what’s even worse, is the majority of items were personally signed to me, for me, along with autographed pictures of my face and my families faces in them,” Gratias wrote in a Facebook post.

“We had recently moved and were storing some of our household and garage items in storage containers near Shellbrook. Someone entered the yard and proceeded to cut the locks off ONE of TWO containers and selectively removed the Gretzky collection from the storage container leaving some expensive household and garage items. Not to mention a whole other container was untouched. Very interesting!! Small group who knew!!!”

The collection featured a plethora of jerseys, autographed photos, and a large painting of Gretzky, as well as autographed sticks and pucks. It also included 2,200 hockey cards of Gretzky, including a framed PSA 8 rookie card.

“This collection was worth way more than just money to me, it was priceless and a true passion, it was never meant to be sold, it was meant to be passed down to generations and future generations and I feel bad for my children, it was theirs,” Gratias said in the message.

Ahtahkakoop RCMP is asking fans and collectors to report any Gretzky memorabilia sold online since November. Reports can be made to Ahtahkakoop RCMP at 306-468-2969, or anonymously through Crime Stoppers at 1-800-222-8477.