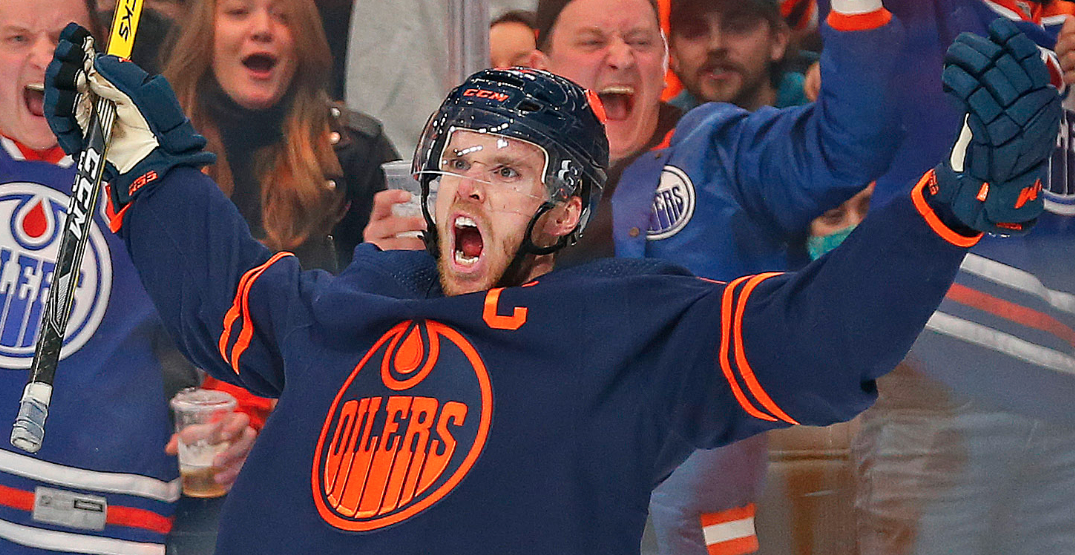 The fact that he’s the first NHLer this season to reach triple digits isn’t likely to turn too many heads, either.

But the company he’s joined as a result might raise an eyebrow.

McDavid, who notched a goal and an assist in a 4-3 shootout win against the Los Angeles Kings on Wednesday night, became just the fifth player in league history to reach the milestone first in at least four campaigns are Wayne Gretzky, Mario Lemieux, Phil Esposito, and Jaromir Jagr.

Gretzky did it nine times, and Lemieux and Esposito each accomplished the feat six times. Jagr did so four times.

“It’s obviously very impressive,” Oilers forward Leon Draisaitl said on Thursday. “He might have gotten 100 in his rookie season too, you know. Obviously, he gets hurt.

“The consistency is amazing, fun to be a part of, fun to watch. It is hard to score in this league. He goes up against the best every single night, right? Every team tries to stop him and every team focuses on him the most, and yet every season he goes out with 110, 120 points, I don’t even know.”

Connor McDavid (@cmcdavid97) is the first to 💯 points this season! 🎉 pic.twitter.com/1l9XndMRW2

McDavid is also only one of two active players to hit the 100-point plateau in at least five different seasons, alongside Sidney Crosby of the Pittsburgh Penguins.

Only three players in NHL history have more 100-point seasons before the age of 26 than McDavid: Gretzky, Lemieux, and Dale Hawerchuk.

The 25-year-old McDavid is tied at five with Bobby Orr and Bryan Trottier.

Oh, ya know – just Connor McDavid and a handful of Hall of Famers.

Only Gretzky, with nine, and Jari Kurri, at six, have more in Oilers silks.

McDavid might’ve been higher on all lists, too.

An injury in his rookie season that limited McDavid to 48 points in 45 games — a pace that wouldn’t quite see him reach 100 points, but at least challenge for it. A COVID-19 shortened 2019-20 season, in which McDavid had 97 points in 64 games, would’ve put him over the top too.

McDavid would be seven-for-seven otherwise.

“That is hard to do,” Draisaitl said. “It’s really, really hard to do.