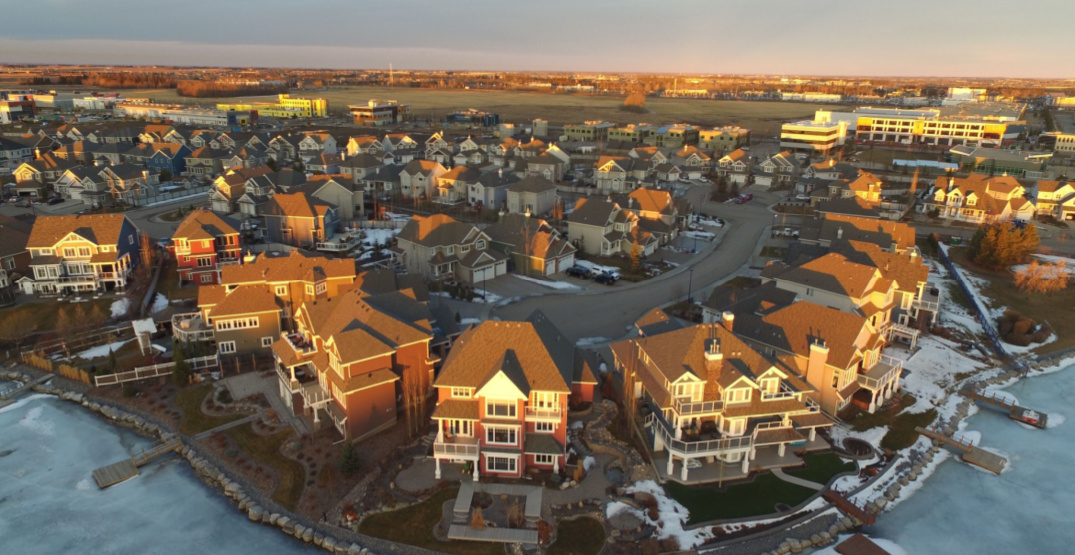 As a whole, the City of Edmonton is not the best place to buy real estate. But if you’re looking for a home in the city, some neighbourhoods offer more value than others.

MoneySense’s Where to buy Real Estate in Canada 2022 report has determined the best and worst Edmonton neighbourhoods to buy property in.

Created in partnership with Zoocasa, neighbourhoods across the city were ranked on several factors, including the benchmark home price as of December 31, 2021, one, three, and five-year prices growth, and the percentage of households with children.

Located near Maplewood and Sherwood Heights, Maplegrove is a community with great parks and amenities. With a benchmark price of $403,827 at the end of 2021, it is the top Edmonton neighbourhood on its list this year.  In December 2021, home prices were 329% higher than they were one year before, 12% higher than three years earlier, and 19% higher than five years earlier. That translates to a value score of five out of five and a neighbourhood economics score of 4.5 out of five.

Maplegrove features mostly detached and semi-detached residences with vinyl or wood siding, dating back to the 1960s. About 47% of households have children, and the area has a number of good schools. However, Maplegrove’s subdivision model means that it isn’t very walkable — its neighbourhood accessibility score is only 0.5 out of five.

The housing stock in Mills Haven features large lot sizes, deep front yards, and mature trees. Homes include an assortment of single-level, bi-level, and split-level houses, clad in vinyl siding or brick veneer. Around 47% of households in the area have kids. The one drawback that may give some home buyers pause: With few amenities and businesses in the area, you’re likely to need a car. Mills Haven has a neighbourhood accessibility score of just 0.5 out of five.

The neighbourhood is made up primarily of single-family detached homes, but you’ll also find multi-family housing and condos. It’s also a favourite among families, with kids in 51% of households. The area is more accessible than the others on our list, with an accessibility score of 2.2 out of five.

Other neighbourhoods to break into the top 10 include Falconer Heights, Broadview Park, Secord, The Hamptons, and Leger. 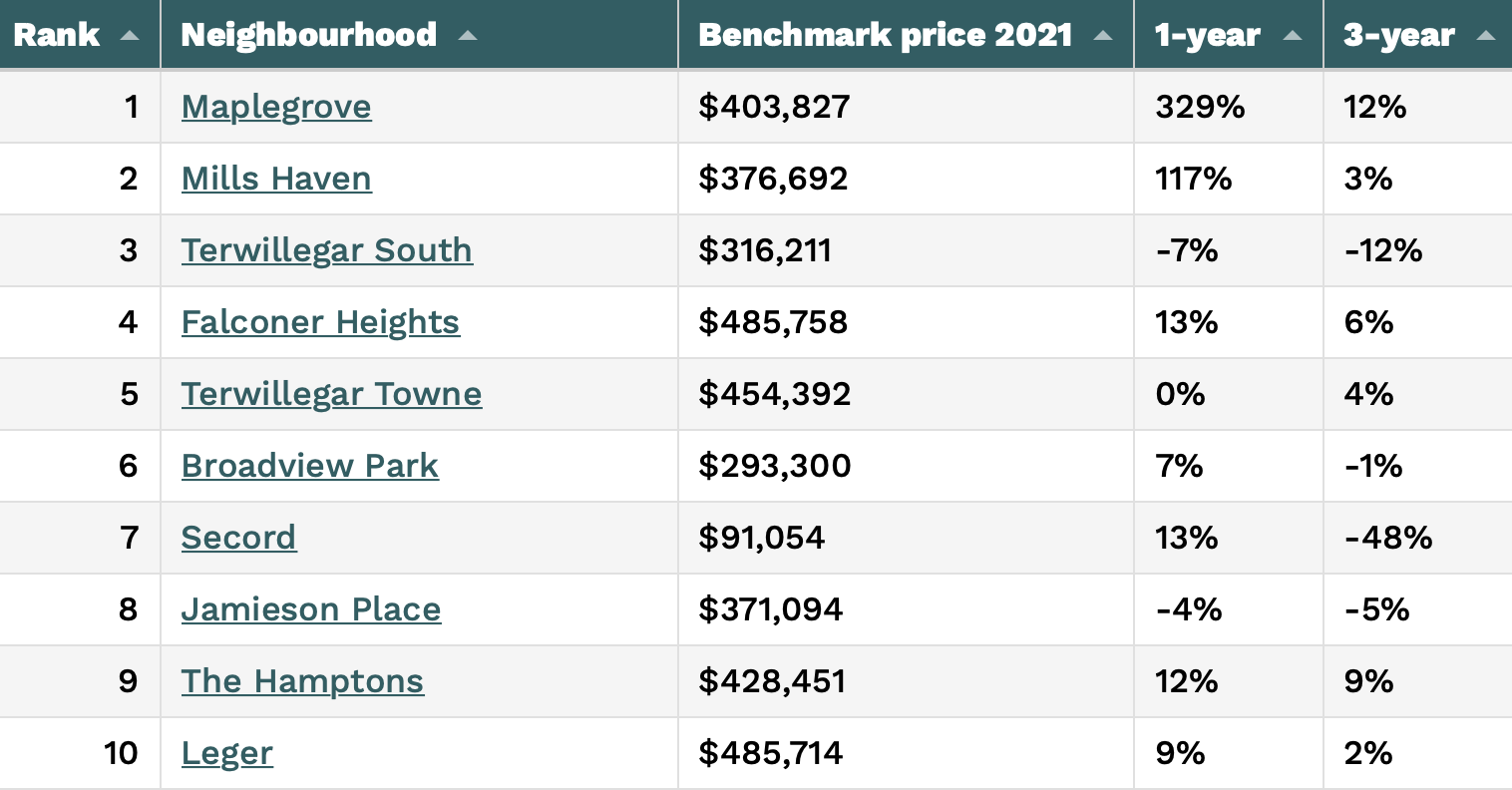 When it came to the worst neighbourhoods in Edmonton to buy real estate, MoneySense ranked the Heritage Valley Area as the worst, followed by Wyeclif, Lago Lindo, and Clover Bar Ranch. 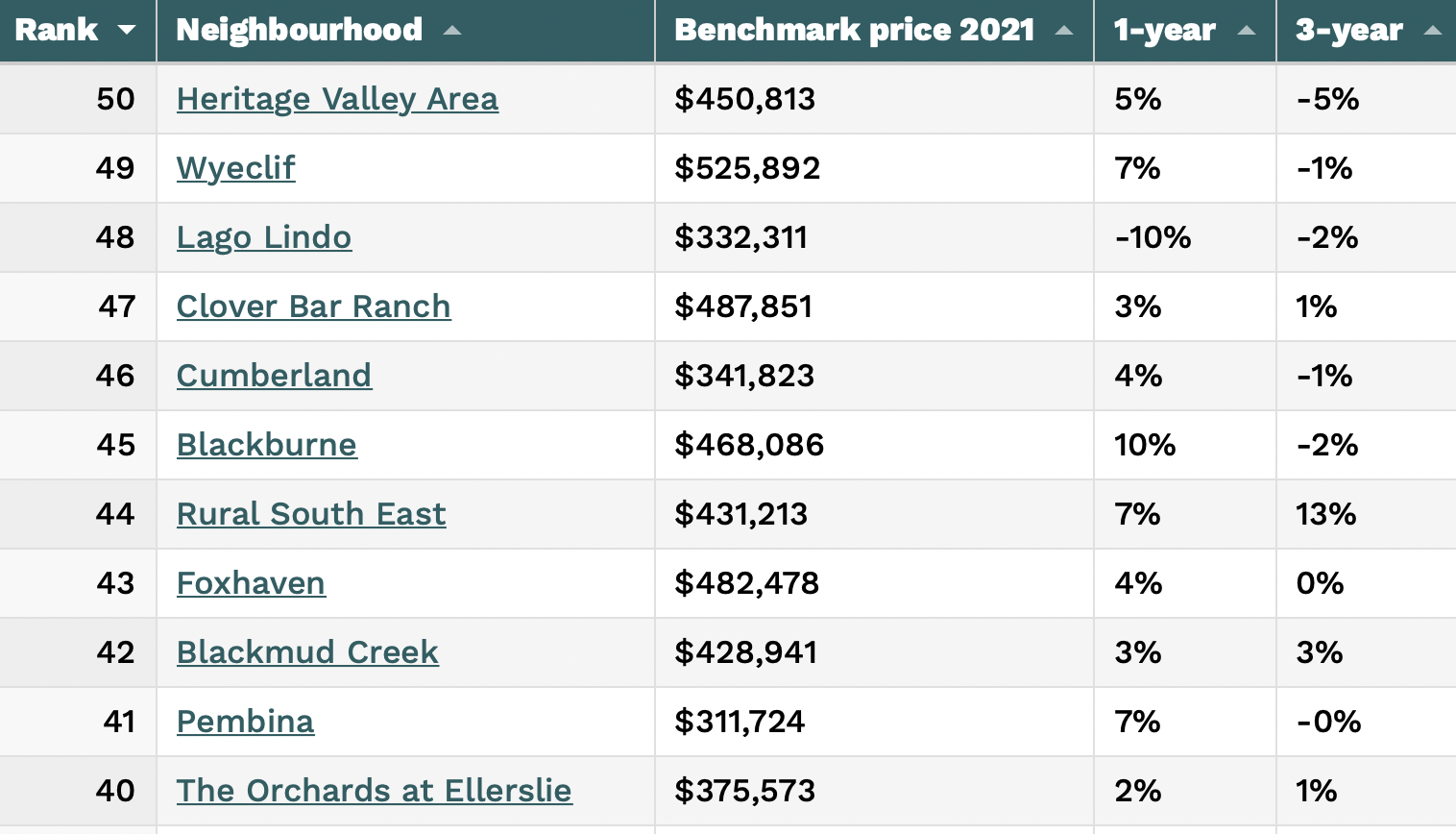 So, there you have it. If you are on the market for a new home in Edmonton, we sure hope you pour through the ranking of these neighbourhoods before you dip your toe in the real estate market in the city.