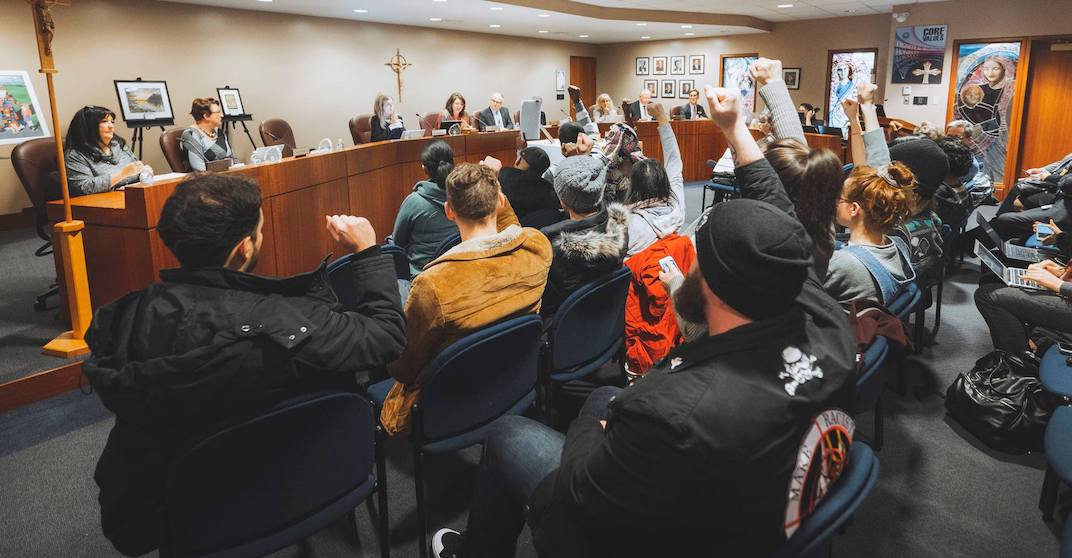 A writer and organizer who silently protested at a Catholic school board meeting last week has been threatened with a lawsuit by the school board for speaking out about the incident.

The Edmonton Catholic School board trustee meeting — which took place last week — was abruptly brought to an end following silent protest and calls to address racism at an Edmonton Catholic school earlier this year.

Emmell, an 11-year-old black student who formerly attended Christ the King Catholic School in Edmonton, was ordered to remove his durag for its “gang affiliations” in September.

Emmell’s mother, Una, contacted Edmonton-based writer and organizer Bashir Mohamed to bring awareness to the issue, and Mohamed conducted a silent protest that led to the eventual cancellation of the meeting.

During the meeting, Mohamed silently held a petition in support of Emmell in his left hand, with his right hand high in a fist, before he was asked repeatedly to put his hand down, and the meeting was cancelled after a brief recess.

“At last week’s public meeting, our Board reacted when a tribute to a school volunteer was interrupted by a protestor resulting in a call for recess. When Trustees realized the business of the meeting could not continue, they adjourned,” said Lori Nagy, spokesperson for Edmonton Catholic School Board, in an email to Daily Hive.

Mohamed was set to appear on a radio talk show last week to talk about the incident, when he was notified moments prior to the interview that he would be facing legal action if he were to speak specifically about the situation with Emmell and Una.

Minutes before going on the @ryanjespersen show I was informed that Edmonton Catholic Schools threatened 630ched with legal action if they interviewed me about Una and Emmell’s case.

They also told me that they are suing me for defamation.

“This threat has impacted other people being able to speak about it. A public catholic school board successfully managed to derail a news interview.”

School Board representative Lori Nagy said the decision to contact the radio station about about potential legal action was based on Mohamed’s comments about their staff.

“On Thursday, November 30, we inadvertently found out that Mr. Bashir Mohamed would be on a Corus Entertainment talk show. In light of Mr. Mohamed’s history of making defamatory comments about our staff, we notified Corus Entertainment of our concerns in this regard,” said Nagy.

“As we are legally obligated to provide not only our students, but also our staff, with a safe and caring environment free of harassment, any defamatory comments about our staff are of significant concern to the division. It was on this basis that the decision was made to contact Corus. We did not threaten to sue the radio station. We are monitoring defamatory comments made by Mr. Mohamed and are reviewing our options.”

Mohamed says that the threat of lawsuit came as a shock.

Since coming forward and speaking out about the incident, Mohamed says he has faced “hateful comments, and numerous threats,” forcing him to have difficult discussions about personal safety.

“It’s been a rough week, but I’m just looking forward to this whole thing being resolved and for them to come to their senses,” said Mohamed.

Nagy said the school board is not pursuing a lawsuit “at the moment,” but it is not at liberty to discuss the nature of the defamatory comments made by Mohamed against the school board.

“The situation that took place at Christ the King School in September and the subsequent information is of great concern to the Edmonton Catholic School Division. We worked with the family and the student is attending another Catholic school. We continue to work towards resolution,” said Nagy.

“We have reached out to the mother to meet but have not heard back. We have apologized for using the word ‘gang’ as it was not meant to suggest the boy was in a gang,” said Nagy.

Mohamed says that although the school board says the allegations of racism were concerning, they failed to address it at last month’s meeting.

“We have three demands: we want the school board to apologize to Emmell. Right now they’ve only apologized for actually using the word gang, they haven’t apologized for the type of situation Emmell was put in, and for typecasting him as a member of a gang” said Mohamed.

“They also haven’t apologized to [Emmell’s mother] for pushing the panic button.”

The other two demands include having the no headwear policy removed, as well as the removal of the ban on Emmell’s mother — which was instated when when the principal of Emmell’s school first met with her in September.

“Durag has nothing to do with gangs, it’s something that’s apart of our culture for centuries now,” Una is heard saying in an audio recording of a meeting with the principal, where she requested an apology for the “racial profiling” of her son.

The principal is then heard saying that the teacher is not going to apologize to Emmell.

The meeting subsequently escalated when the principal put the school on lockdown, called the police, and banned Una from the school premises for one year.

A formal apology has not yet been issued for the incident or the ban, but the school board says they stand by their decision to ban Emmell’s mother from the school.

“We stand by the ban at the school the student used to attend, as the mom’s conduct escalated at the school after the taped recording was turned off,” said Nagy.

“School staff can be seen crying and reported fearing for their safety. Police have also confirmed the mother’s aggressive behaviour to media. We must provide a safe environment for students, but also our staff; an environment free from harassment. The mother was banned from entering the school for a year and this is a decision that is rare in our division and is not taken lightly.”

According to Mohamed, the school board could have resolved the issue with an apology to Una.

“They doubled down and banned the mom and continued to cite this policy under the guise of safety with no evidence,” said Mohamed.

“They still continue to portray Una as the angry black woman and it’s dangerous, and it’s perpetuating racism.”

The next Edmonton Catholic School board meeting is slated for December 17, where Emmell’s mother Una is registered to speak.