Edmonton Police Service is investigating after a suspicious death over the weekend was deemed a homicide.

According to EPS, police responded to a call for assistance from Edmonton Fire Rescue Services on the report of a fire in the area of 126 Avenue and 73 Street at approximately 10 pm on Sunday, January 26, 2020.

Upon arrival, police located 24-year-old Aaron Watt, who was deceased.

Police say an autopsy was conducted on Tuesday, January 28, but police are not releasing the cause of death at this time for investigative reasons.

A short while later, police were also called to the scene of a vehicle fire north of the Evergreen mobile home park, around 173 Avenue and Meridian Street, where a burned silver 2010 Mitsubishi Outlander was located, says a release from EPS.

Police are currently looking for leads related to the incident, including surveillance and witness accounts from a gas station in the area.

“Investigators are looking to speak with any gas station staff or customers who witnessed anyone purchasing and/or filling a red plastic 5L Sceptor gasoline jerry-can, who may have been travelling in a silver 2010 Mitsubishi Outlander between the hours of 8 p.m. and 11 p.m., on Sunday, Jan. 26,” says EPS in a release.

“Police are also asking gas stations to review their surveillance footage and check for any sales transactions for a 5L Sceptor gasoline jerry-can, between the hours specified on Sunday, Jan. 26.”

Anyone with information in relation to the death of Aaron Watt is asked to contact the EPS. 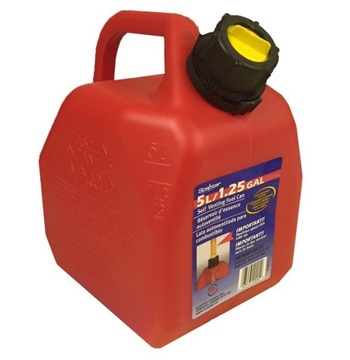 Stock images of the jerry can police believe was used