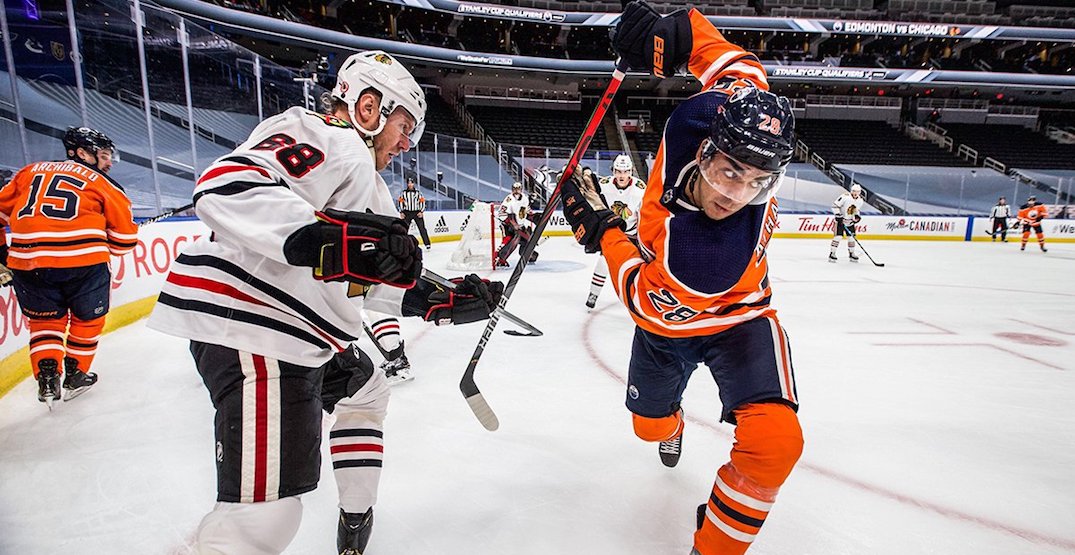 The NHL’s qualifying round can quickly turn against a team and the Edmonton Oilers are finding that out first hand. They started with the optimism of being a No. 5 seed and one of only two teams playing in their own building, but now face elimination needing two straight wins over Chicago starting on Friday.

“I think for them right now they’re probably like ‘what just happened?'” said former Oiler and current TSN 1260 co-host Jason Strudwick.  “We were the favourites in this series and now we’re on the outside looking in and we could be out by Friday at 7 pm.”

Strudwick only suited up in seven NHL playoff games during his playing career, but did win back-to-back Memorial Cups with the Kamloops Blazers in the mid 90’s and says everything leading up to an elimination game is different.

“You just want to get out there and play but you can’t let your emotions rule the day. You’ve got to find a way to make sure you’re calm, you’re collected and you are just focusing on that first shift. If you get so worked up and so emotionally, wound up about the outcome you won’t be able to play”

The veteran of over 670 NHL games says the current Oilers situation looks grim but stressed it starts with winning the first period. To accomplish that he emphatically stated they need to double down on discipline and not just the kind that provided six power plays for Chicago, including a five-on-three man advantage late in the first period of Game 3 where Jonathan Toews scored his third of the playoffs.

Jonathan Toews cashes in on the power play with a wacky goal with just seconds left in the first period!#Blackhawks pic.twitter.com/tR3Cl9aWHo

“It’s about the areas of defending and limiting the chances against,” said the former blueliner. “I’m a little biased but the Oilers defence are battling like crazy in front, they’re doing every thing they can but they need help defending their own zone. You can’t allow so many point shots to get through.”

Along with more disciplined play in their own end and clogging up shooting lanes the Oilers simply have to start being smarter when it comes to penalties. There were some questionable calls, but not all of them says Strudwick who racked up over 800 penalty minutes during his career, and it’s the ones away from the play or extremely obvious infractions like Kailer Yamamoto’s boarding call in the second period of Game 3.

“You clearly see the player’s number when going to hit him.”

Really ugly hit by Kailer Yamamoto on Connor Murphy that's a major penalty in virtually any other league. Only ended up being two minutes. Sees him the entire way and comes in with speed pic.twitter.com/MVegacwrGo

The six power plays did more damage to the Oilers than just the one goal Chicago scored.

“The best way to neutralize Connor McDavid from a Hawks stand point is the Oilers taking penalties because he’s not going on the ice. It wrecks the flow.”

Most of the Oilers flow offensively has come off the sticks of McDavid and Leon Draisaitl who have combined to score eight of the Oilers 13 goals. While the pair might actually be capable of carrying the Oilers, offence shouldn’t be a concern says Strudwick.

“They have 13 goals in three games, you should be able to win three games with 13 goals, that should be enough to get it done, unfortunately they can’t defend.”

Throw in some emotion from Zack Kassian — if he can hopefully straddle the line of playing on the edge and staying out of the box — and Strudwick feels the Oilers could swing the series back in their favour.

“His only two shifts in the third period, not ideal. He’s not living up to his end of the bargain,” he said of the right winger who started on McDavid’s line in game one but played just over six minutes in Game 3. “He’s gotta bring his game up and connect emotionally. When he’s physical and he’s chirping he’s involved in the game and maybe that’s part of the problem, he’s having trouble identifying who to pick on with the Hawks. Pick anybody, pick the stick boy if that’s what you need but find someone and emotionally connect in the series because man they could really use a Zack Kassian right now”

Strudwick says if the injured Tyler Ennis were available he’d consider sitting Kassian, but with Ennis out for Friday — and likely much longer — it could be an opening.

Tyler Ennis and Kirby Dach collide. Ennis clearly in a lot of pain as he leaves the ice. pic.twitter.com/qEotKrVjL2

“There’s a stay of execution for Zack Kassian, he gets a second life.”

How long the Oilers playoff life lasts once puck drops at 4:45 pm MT, depends on their commitment to discipline in their own end.

“That is urgency, that’s the details in the game that quite frankly you lose if you’re off for four or five months.”