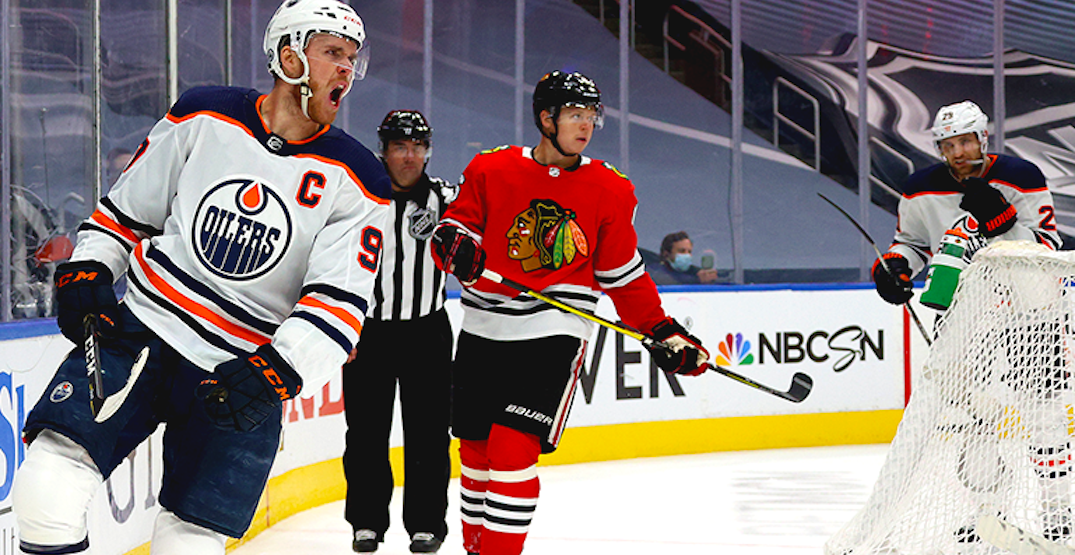 The Edmonton Oilers are on the brink of elimination.

Hockey is a game of inches, and it unfortunately rang true for the Oilers in Game 3 on Wednesday.

After leading 3-2 for a majority of the third period, a pair of late goals — both deflections — found their way past Mikko Koskinen and the Oilers had just 1:14 to try and come up with an answer.

They couldn’t, and now trail the Chicago Blackhawks 2-1 in the best-of-five series.

Making matters worse, the game-winning goal was friendly fire, with Blackhawks defenceman Connor Murphy’s point shot deflecting off Ethan Bear’s stick, off the crossbar and in.

It was a stunning end to a game where the Oilers got excellent performances from both Connor McDavid and Leon Draisatl.

Draisatl was particularly impressive. After a quiet night in Game 2, the Art Ross winner and Hart Trophy nominee picked up a pair of goals and added an assist in Game 3.

Draisatl’s first goal came when he coasted unguarded to the left of Corey Crawford and buried a one-timer to tie the game up in the first period.

After a fanned pass by Matthew Highmore, Draisatl was able to steal the puck and eventually get his second of the game after burying a juicy rebound in the slot.

Draisatl then picked up the primary assist on the Oilers’ third goal, taking a wrist shot that created a rebound that McDavid buried with less than 10 seconds left in the second period.

The Oilers now find themselves needing to win the next two games to keep their season alive, and they may be down a few bodies as well.

The Oilers had Adam Larson missing from the lineup on Wednesday and his status for Game 4 and beyond is still unclear. Caleb Jones drew into the lineup in his place.

Tyler Ennis left the game in the second period with what appears to be a leg injury after taking a hit from Kirby Dach.

The Oilers had a record-setting 50/50 draw for this game and actually sold out of tickets after five hours, with the jackpot reaching a whopping $5,417,130.