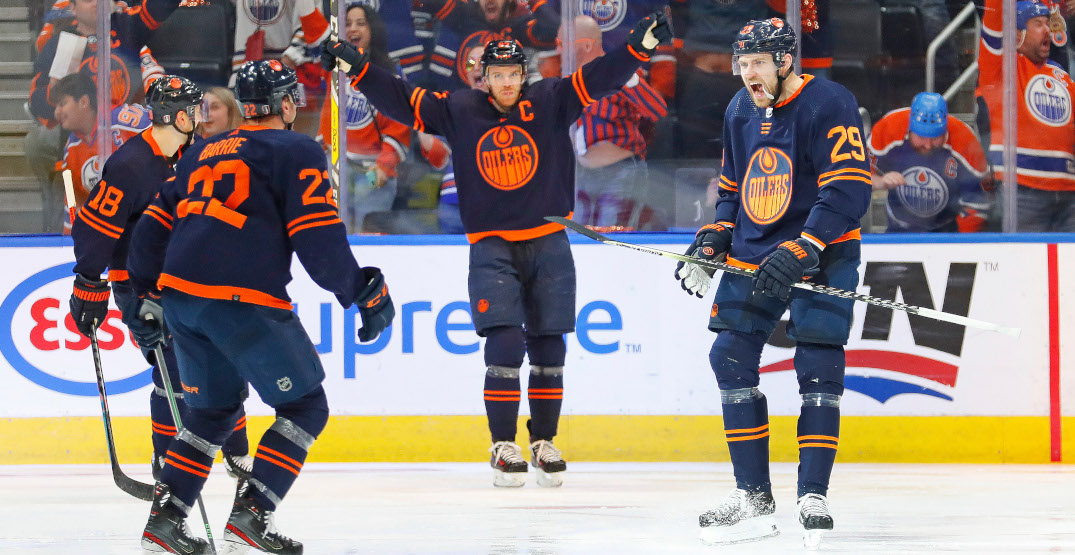 If Game 1 was any indication, it looked like the Edmonton Oilers and Los Angeles Kings were going to battle in a tight series.

While the series could still play out that way, that certainly wasn’t the case in Game 2.

Evander Kane led the way with two goals and an assist as the Oilers steamrolled the Kings 6-0 to even up the series.

Leon Draisaitl scored on the power play for the second straight game, with his tally standing as the game-winner.

We've seen Leon launch many a rocket from there but REALLY?! 💥#LetsGoOilers pic.twitter.com/nY0teYCxg8

The Oilers’ power play has been running hot in this series. They’re now converted on four of eight opportunities so far.

Los Angeles has yet to score a power play goal in the series.

Darnell Nurse’s shorthanded goal was arguably the backbreaker for the Kings. Connor McDavid forced a turnover on the penalty kill and led an odd-man rush up the ice. He then fed Nurse, who had his shot deflect off of Arthur Kaliyev’s stick and into the net.

Ryan McLeod put the game out of reach for Los Angeles before the end of the second period, when he deflected an Evan Bouchard point shot past Jonathan Quick to increase the Oilers’ lead to 3-0.

Kane, who was dynamite offensively for Edmonton during the regular season, was the only Oilers skater to score twice in the game.

His first goal occurred on a fortunate bounce, as Kings defenceman Sean Durzi swatted the puck into his own net.

What's that quote about missing the shots you don't take? A pretty notable guy said it… help us out here. #LetsGoOilers pic.twitter.com/4kcWbCNX1J

Kane scored later in the third period on the power play, while Jesse Puljujarvi added the other Edmonton goal in the rout.

Blowouts have been a common theme three days into the NHL playoffs. Seven of the 12 games so far have featured teams winning by at least three goals or more.

No blowout so far has been bigger than the Oilers’ demolishment of the Kings on Wednesday night.

Not only were the Oilers dominant on the scoresheet, but they were imposing physically throughout the game as well.

Everyone except Brett Kulak recorded a hit for Edmonton in the #LetsGoOilers 6-0 win tonight. 48 hits in total for the club. #PlayoffHockey

Kassian led all Oilers with six hits despite playing a team-low 8:41.

So it's been a tad physical. 🤏#LetsGoOilers pic.twitter.com/DfsfFCgpKf

The Oilers got contributions from everyone on Wednesday night, including goaltender Mike Smith. He redeemed himself in a big way after costing the team Game 1 with his high-risk puck-handling tactics, making 30 saves for the shutout win.

It was his first postseason win for the Oilers after losing his first five starts over the last two years.

Dating back to his time in Calgary, Smith was winless in 10 straight postseason games before tonight.

The 36-year-old Quick hasn’t had much luck in the playoffs either of late. He’s won just two of 11 postseason games since leading Los Angeles to the Stanley Cup back in 2014.