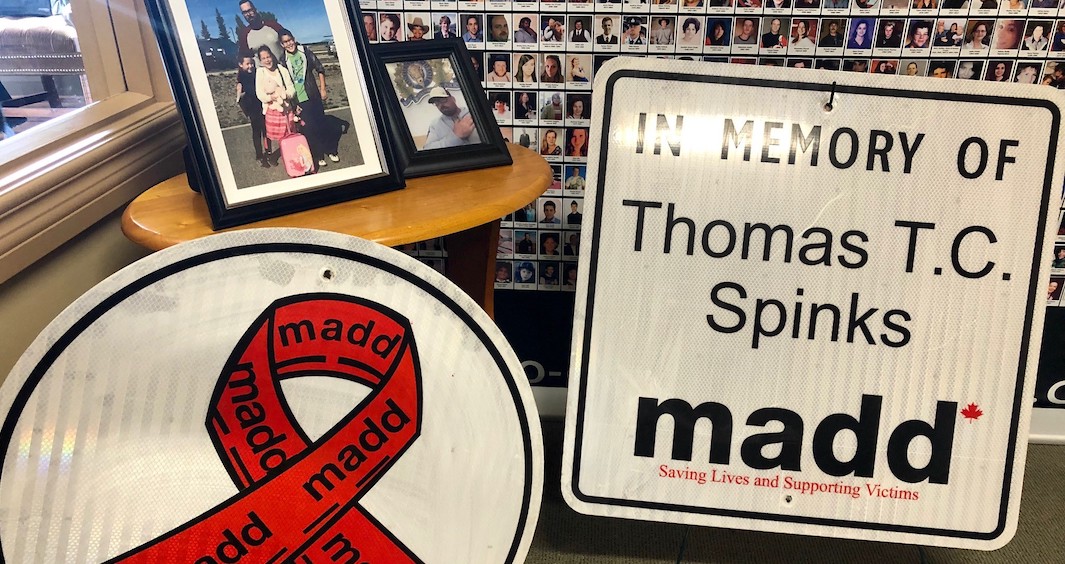 A sign will soon be placed on southbound Highway 2, just south of Highway 41, to commemorate a life lost in an alcohol-related crash.

Honouring the memory of Thomas Spinks, who died in an alcohol-related accident on October 23, 2017, the sign was unveiled by Mothers Against Drunk Driving (MADD) Edmonton & Area Chapter and the victim’s father, Tony Wentworth, on Wednesday.

The sign itself features Thomas’ name and MADD Canada’s iconic red ribbon and will be placed near the crash site where Thomas lost his life.

“The sign pays tribute to Thomas and also serves as a powerful reminder to the public about the tragic consequences of impaired driving,” said a release from MADD Canada.

“My family and I cannot express adequately what this sign means to us,” said Mr. Wentworth. “We now have a lasting marker to honour Thomas at the location where he was taken from us.”

Representatives from MADD say that the signs are important to commemorate lives lost.

“Roadside memorial signs are a powerful and lasting way to honour victims of impaired driving, and also deliver a compelling message to the public about what can happen when someone drives under the influence of alcohol and/or drugs,” said MADD Canada Western Region Victim Services Manager Gillian Phillips.

MADD Canada has collaborated with governments in other provinces, including Manitoba, Saskatchewan, Ontario, New Brunswick, Nova Scotia, and Prince Edward Island, to install memorial signs for victims of impaired driving.

“Signs also act as a prevention and awareness [method], as hopefully people that see the sign and realize a life was tragically ended by someone driving impaired will choose never to do that themselves,” said Phillips.

For the families, they serve as a reminder of the life and loss that they experienced.

“It is a source of light during an awful time,” said Wentworth.