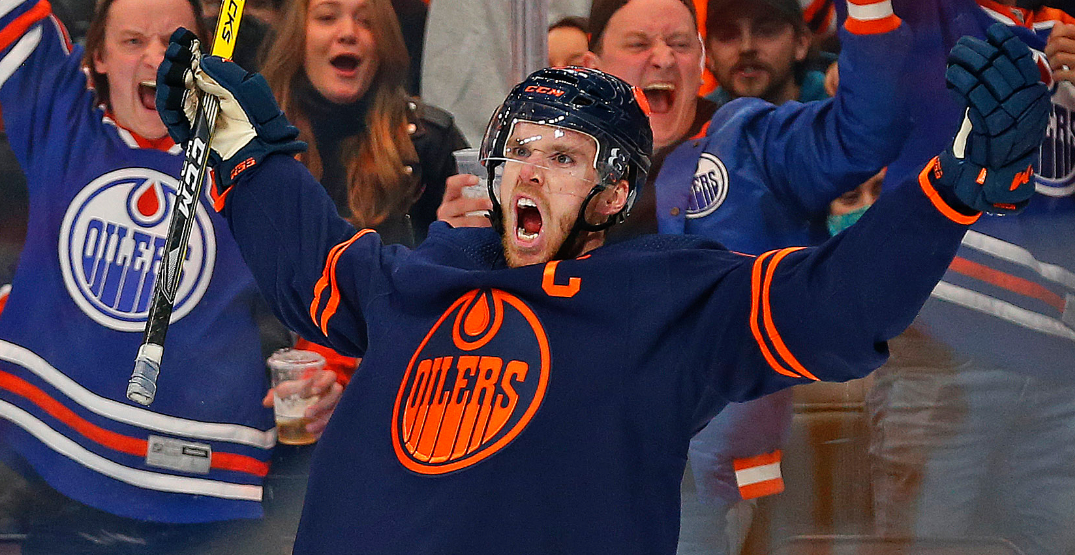 Looking for the perfect gift idea for the Edmonton Oilers fan in your life?

Best start digging into some couch cushions. Maybe check an old pair of pants for some cash, too.

Because a Connor McDavid jersey is fetching five digits to the benefit of the Edmonton Oilers Community Foundation.

The autographed, game-worn jersey from October 18 is still up for grabs.

Oh. He had a hat-trick that night. Against the Calgary Flames, too. McDavid netted his 10th career three-goal thumping in the game, torching the Flames in the first edition of the “Battle of Alberta” in the 2021-22 campaign.

That should boost the value a little.

But you can build one heck of a package around it.

Add in a game-used autographed puck from McDavid’s first marker in the game. The puck he zipped over the sprawling Flames goaltender Jacob Markstrom at 17:29 of the first period has reached USD $2,050 after five bids.

Get the game sheet — autographed, of course — for USD $406 to complete the set.

If the cost of those McDavid items is a little out of reach, the Edmonton Oilers Community Foundation 2021 Online Charity Auction is filled with other collectables.

Fancy Leon Draisaitl, the NHL’s current Art Ross Trophy leader? You can nab his jersey from the same game. It comes in at a bargain at USD $2,810 if the latest of eight bids holds. Jesse Puljujarvi’s sweater is also available at USD $1,205, too.

Goalie fans can grab Mikko Koskinen’s game-worn mask from last season. Bids have topped USD $2,605. Mike Smith memorabilia more to the taste? His game-used pads, complete with signature, can currently be had for USD $755 should the bid hold. The matching blocker and glove ring in at USD $500, too.

Net proceeds from the auction, which closes November 29, will benefit the Edmonton Oilers Community Foundation and their commitment to the community.

Since its inception in 2001, the Edmonton Oilers Community Foundation has contributed over $56 million to more than 2,900 charities, minor hockey programs and community groups in Northern Alberta.