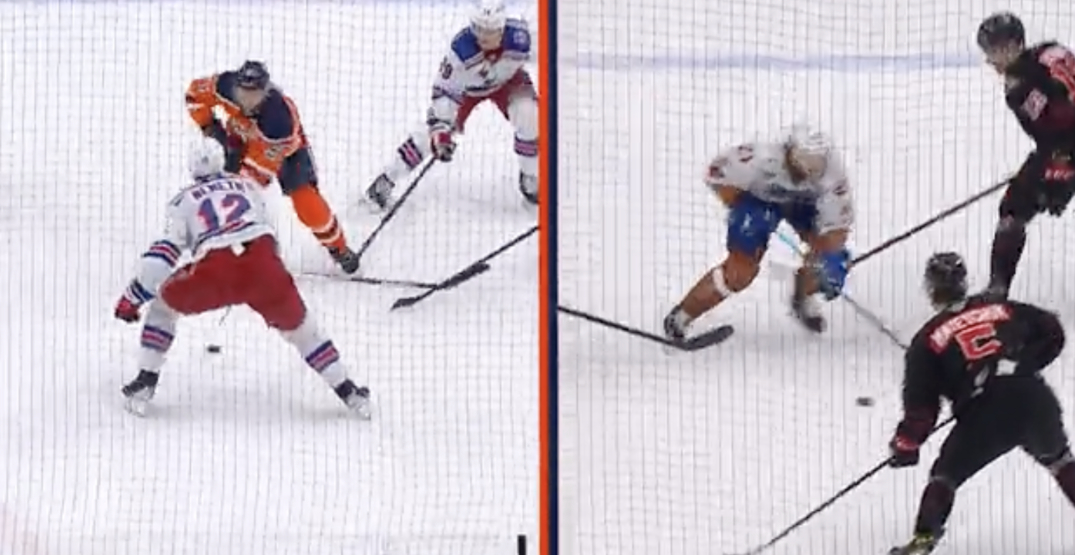 Edmonton Oil Kings forward Jake Neighbours channeled his inner Connor McDavid, scoring a highlight reel goal at the expense of the Moose Jaw Warriors in a 7-4 win on Saturday.

Something about Captains at Rogers Place, am I right @EdmontonOilers and @StLouisBlues? pic.twitter.com/MHVpbF3nZP

The 19-year-old Neighbours took a pass at centre ice before darting through a foursome of Warriors defencemen and lifting a shot over goaltender Jackson Unger in his best McDavid impression — right down to the celebration.

The goal was reminiscent of one netted after McDavid torched the New York Rangers on November 5 with a highlight-reel goal-of-the-year candidate that he later rivalled some two weeks later.

Goal of the year it probably won't be close & we won't be taking questions at this time. #LetsGoOilers pic.twitter.com/k21CkSe6AK

Neighbours was selected in the first round (No. 26) of the 2021 NHL Draft and played nine games with the St. Louis Blues before being returned to junior.

He was named to Canada’s National Junior Team Selection Camp Roster, and is a strong candidate to represent his country at the 2022 IIHF World Junior Championship in Edmonton and Red Deer from December 26-January 5.

The Oil Kings earn a win on Teddy Bear Toss night, thanks in part to three points from @StLouisBlues prospect Jake Neighbours.