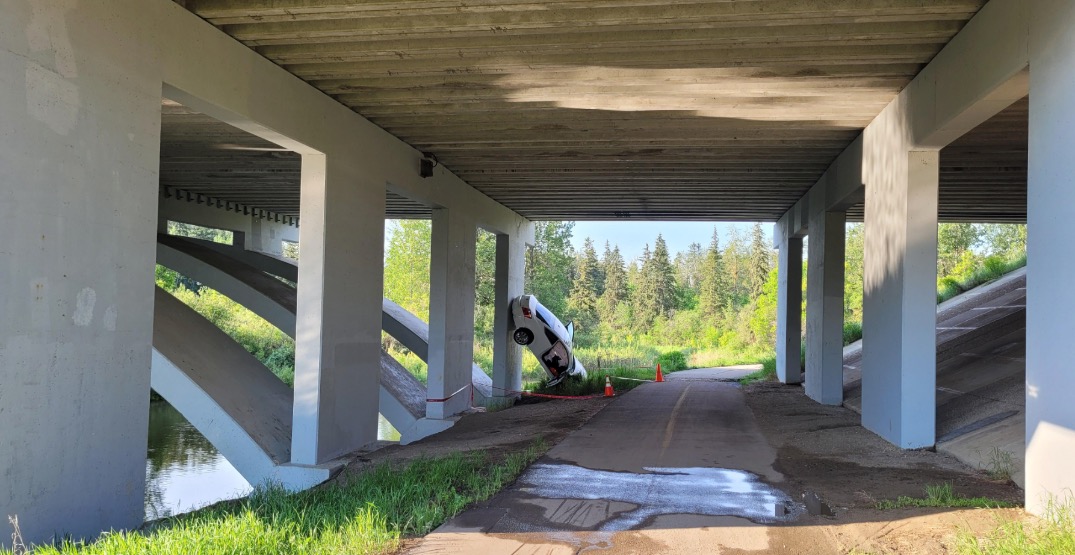 A post on Reddit of a vehicle in Edmonton perched at a bizarre angle under a bridge has left many people scratching their heads — including the police.

Police say at approximately 6:45 am on Wednesday morning, someone saw a white vehicle propped up against Campbell Bridge, on Fox Drive, that appeared to have been in a collision and reported it to them.

Police responded to the scene and didn’t find a driver or passenger.

Members continue to investigate how the vehicle came to rest in the area and investigators are also trying to determine who was operating the vehicle.

A photo of the vehicle resting in its position was uploaded to Reddit, and it is truly a sight to see.

It’s caused many Edmontonians to question just exactly how the driver of the vehicle managed to land in such a position.

One user had some insight about how this is even possible.

“What it looks like to me is the car came down the hill, in reverse, dragging that dirt onto the walkway. It then hits the column at enough speed that the tail is still in the air, and the momentum of the vehicle continues to push it backwards which drives the tail into the air as we see it now.”

They go on to say, “I could find it totally believable if it turns out that nobody was in the vehicle when this happened. It could easily have been a case of someone getting out of the car while incorrectly believing it was in park.”

“What, you’ve never crashed your car in an unrecoverable way and then just ditched it like an irl game of GTA 5?”, wrote one user, while another joked “Vertical parking only.”

Police are asking any witnesses to the collision to contact the EPS complaint line at 780-423-4567.