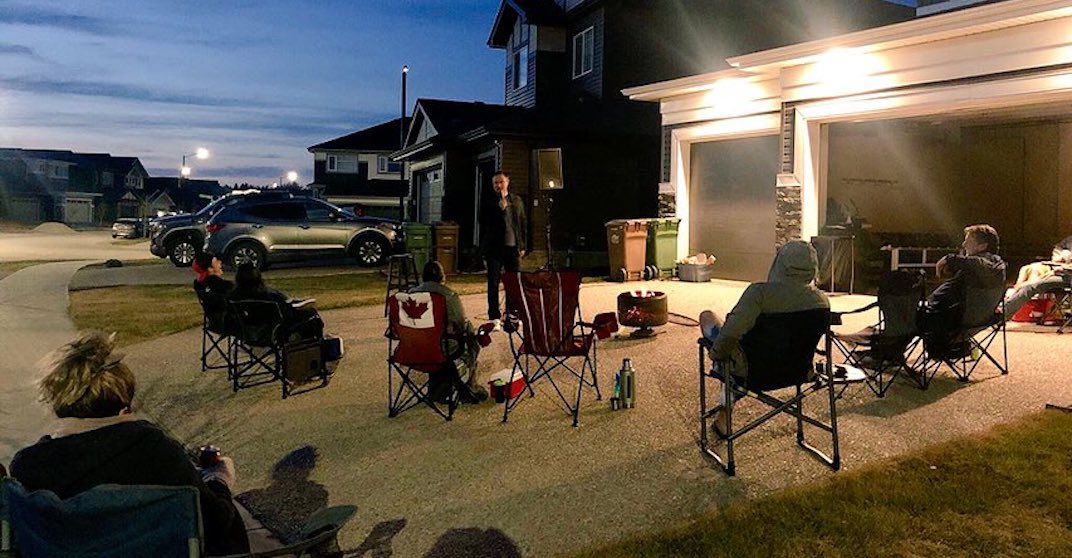 A local comedian is bringing stand-up comedy right into people’s backyards as part of what he’s calling a “fire pit comedy tour.”

Lars Callieou, a comedian from Edmonton who has been performing stand-up for 17 years, has had to get creative in finding ways he can continue to perform amid the COVID-19 pandemic.

“I have been very fortunate in my 17 year comedy career that I haven’t had more than a week off. I was supposed to be on a four-month tour of Australia and Asia that I do each spring, and we were 11 days into a four-month tour when we got the call from the prime minister to come home,” Callieou said in an interview with Daily Hive.

“I love performing. I love being on stage. And that’s the reason there hasn’t been a break, not because I’m so successful, but because I can’t go that long without seeking the approval of strangers.”

Callieou said after his 14 days of isolation upon return from Australia, he was trying to keep busy but really just wanted to be back on stage.

“Through necessity I put out a tweet that read, ‘If you’re having a gathering in your backyard I’ll bring a speaker,’ and a few people showed some interest,” said Callieou.

The first two shows of the “tour” took place on May 2, and Callieou says that so far, the shows have been such a hit that he’s booked up on Friday and Saturday nights until June 20.

Shows run 60 to 75 minutes, and guests are to be physically distanced in the audience according to health guidelines

“They exceeded my expectations. I thought they were going to be a little bit tough, I thought it was going to be work to try and get people to laugh when there’s ten of them in their backyard, but both shows were fantastic.”

The proceeds from the shows, which are being offered on a “pay what you can” basis, are also being donated to local charities.

“It was really just the desire to be performing again, it wasn’t a noble pursuit. the charity thing came about because people started donating to the food bank and the Red Cross and people have been very generous,” said Callieou.

Callieou says he is happy to be performing again to keep him busy during this time, and that the shows are being delivered in backyards, safely and from a distance.

He’s also looking forward to when he can finally deliver shows to larger audiences.

“Comedy isn’t perfect from 80 feet away or from 100 feet away, you have to feel like you’re intimate,” said Callieou

“When we find a way to do this all safely and things return to some sense of normalcy, I’m really excited about that. I’m hopeful, but cautiously optimistic.”

Those interested in booking a show can reach out to Lars via Instagram or Twitter @ExtraLars, or you can see him perform at the Spotlight Cabaret in Edmonton this weekend, which will be open at 25-30% capacity Friday and Saturday.