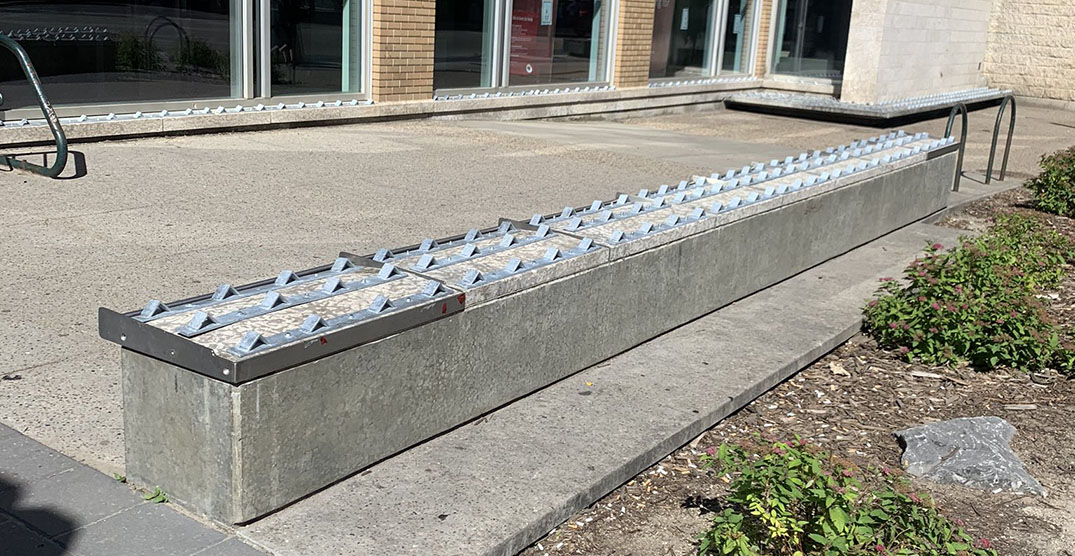 A CIBC branch in Edmonton has removed metal spikes on a bench outside the bank that were designed to prevent homeless individuals from sleeping or sitting there.

The decision came after public pressure from people in the community, including urban planner and designer Amos Kajner-Nonnekes, who called the spikes “barbaric.”

“We’ve been doing a lot of work to make downtown a safe and inclusive space. This goes against all of that,” he told Daily Hive in a phone interview.

Seriously @cibc… This is unacceptable in our downtown. Hostile architecture is never an answer. This goes directly against all the work we are doing to make downtown a vibrant, inclusive space. #yegcc pic.twitter.com/Bxwcru3d5y

After he first saw the spikes this week, Kajner-Nonnekes took matters into his own hands by designing hard-backed cushions for homeless people to continue sitting on top of the spikes.

Downtown is for everyone. We’ll be handing out these spike-proof chair pads downtown so that publicly accessible space, like that in front of @cibc, remains inclusive. In-humane design and hostile architecture is not the answer. Be better. #seatsnotspikes #yeg #yegdt pic.twitter.com/SG0nses7VF

But he know cushions were only a temporary solution.

“We can give out hundreds of cushions and won’t fix the problem,” he said. “The problem is that we’ve created a situation where people have nowhere else to go but to sleep outside on a concrete bench.”

More broadly, he’d like to see more supportive housing and services for mental health and addictions in the city.

CIBC spokesperson Trish Tervit confirmed to Daily Hive that the spikes were removed Friday after input from people like Kajner-Nonnekes.

“While the barriers were installed following a number of incidents, we appreciate the feedback we have received and will be removing the barriers,” she said.

Kajner-Nonnekes offered on Twitter to help the bank design a more inclusive space for the community outside its Jasper Avenue branch, but he hasn’t yet heard back.

Good move, @cibc. Our offer is still on the table — we’ll design a space that works for both you and the community, all fees going to @BoyleStreet. Help us help you. https://t.co/T7j8m8uEG7

If the bank accepts his proposal, he’d donate the entire design fee to Boyle Street Community Services, an Edmonton organization serving the homeless.