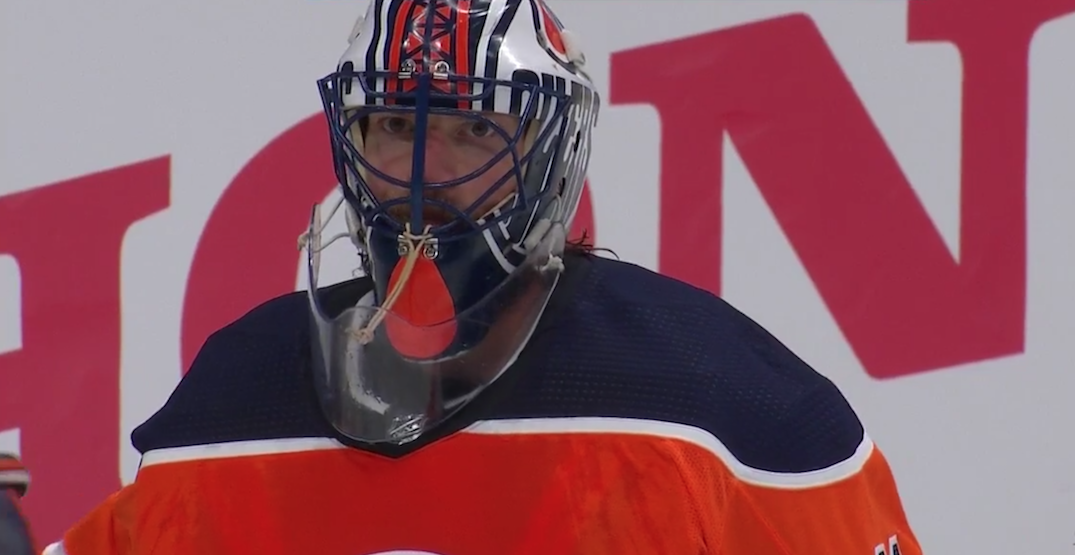 You couldn’t have predicted much of a worse first game for the Edmonton Oilers.

Kicking off the Western Conference play-in round on their home ice, the Oilers allowed four goals in a 7:06 span during the first period en route to a 6-4 loss against the 12th-seeded Chicago Blackhawks.

Officially announced as the surprise starter just over an hour before puck drop, Mike Smith made just 18 of 23 saves before he was mercifully yanked with 13:28 left in the second after allowing his fifth goal of the night.

But things didn’t really get much better.

Mikko Koskinen’s mop-up duty was very much a case of too little too late, as despite making every save but one the rest of the way, the game already out of hand. Perhaps under ordinary circumstances a home crowd could’ve made a difference, but there was very much a lonely feel to this one.

With Smith making 39 starts to Koskinen’s 33 before the NHL went on a pause, it was under debate which netminder would get the nod on Saturday afternoon.

Smith’s .902 regular season save percentage was noticeably worse than Koskinen’s .917, but the former’s 24 playoff games of experience also dwarfed what eventually became the latter’s debut anyway.

But it’s hard to just pin the Oilers’ shortcomings on who was (or wasn’t) in their net. They didn’t score a single goal at even-strength until the final four minutes of the game, gave the Blackhawks six power play opportunities, and perhaps most importantly, allowed 42 shots on net while taking just 29.

Rookie Dominik Kubalik set the pace pair for Chicago with a pair of goals and three assists, a new NHL record for a playoff debut.

Dominik Kubalik (2-3—5) became the first player in NHL history to record five points in his playoff debut, besting Daryl Evans' mark during Game 1 of the 1982 Division Semifinals with the Kings (2-2—4). #StanleyCup #NHLStats pic.twitter.com/qCiNQjWYHy

Edmonton actually got out to what seemed like a strong start in this one, with captain Connor McDavid scoring a power play marker 2:34 into the first period.

Here's how 97 kicked it off. #LetsGoOilers pic.twitter.com/XKGGVPxLI0

But it wouldn’t be long before the Oilers found themselves in a hole way too deep to dig out of, as it was 4-1 Chicago just 12:57 into the game.

James Neal added a third power play marker with just under four minutes left in the third period to make the score 6-3, with Oscar Klefbom following under a minute later to make it 6-4. But that was as close as they’d get.

For the Hawks, Jonathan Toews also had a pair of goals, with Brandon Saad, and a former junior teammate of McDavid, Dylan Strome, scoring the others.

O CAPTAIN! @JonathanToews has three points (2G, 1A) in 13 minutes of play!

The six goals against tied a season-high for the Oilers. Unsurprisingly, they lost all five of those other occurrences.

Edmonton certainly didn’t look anything like the team EA Sports made them out to be, as they crowned the Oilers champions in their annual playoff sim earlier today.

The Official #NHL20 Playoff Simulation is in… 🔮

The Edmonton Oilers are your 2020 Stanley Cup Champions!

They defeated the Pittsburgh Penguins in 6 games to win the Stanley Cup! pic.twitter.com/1EDLyfaZif

McDavid’s postgame comments weren’t overly surprising. Despite personally having four points on the night, the Oilers as a whole left much to be desired throughout the middle 50 minutes of the game.

“We werent good enough. In every facet. Not much else to say. We have to be better next game.” McDavid

The Oilers now find themselves looking for answers quickly, returning to the ice Monday night at 8:30 pm MT now down 1-0 in their best-of-five series.

Before the game began, Minnesota Wild defenceman Matt Dumba was on hand to give a speech for the pregame ceremony. Dumba addressed racism inside and outside of the game of hockey, before taking a knee during the American anthem. Oilers defenceman Darnell Nurse and Blackhawks goalie Malcolm Subban both put a hand on Dumba’s shoulder while this occurred.  Dumba is a founding member of the recently formed Hockey Diversity Alliance.

“Hockey is a great game, but it could be a whole lot greater… and it starts with all of us.” – @matt_dumba#BlackLivesMatter | #isupportHDA pic.twitter.com/KaV1hoPfyH