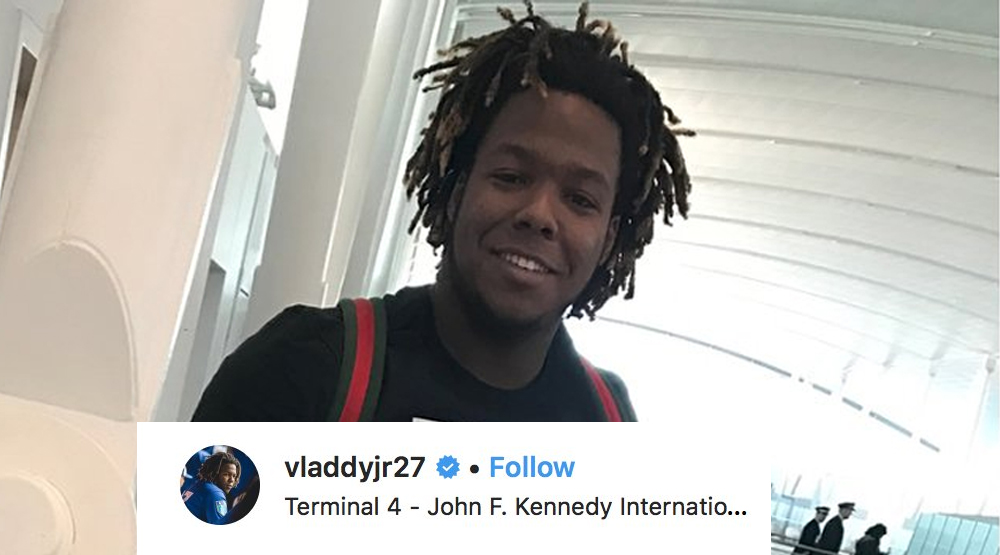 It was either an innocent mistake or a top-notch troll job by the Toronto Blue Jays’ most talked-about prospect. For a span of about 20 minutes, Vladimir Guerrero Jr. had Jays fans on pins and needles after an auspicious Instagram post which placed him in Queens, New York.

The Toronto Blue Jays just so happen to be in New York for a two-game series against the Mets. Guerrero Jr. is down in Double-A with the New Hampshire Fisher Cats, but they’re on the road in Hartford, Connecticut.

So what was Vlad doing at JFK Airport in New York, nearly a two-hour drive away?

The sequence of events caught Blue Jays Twitter by surprise and sent everyone into a complete frenzy. For weeks, people have been begging the Blue Jays to call up Guerrero Jr. and all signs pointed towards this move.

All the puzzle pieces seemed to fit perfectly and the narrative wrote itself. Vlad was in New York. The Blue Jays were in New York. The Jays had an off day. They have a few roster moves to make ahead of Tuesday’s game against the Mets.

They had to be calling up their top prospect, right? Wrong. False alarm. “Vlad Watch 2018” wasn’t happening after all.

Shortly after posting the original photo to Instagram, Guerrero Jr. removed the location on his photo, which was originally JFK Aiport in Queens, New York. Then after some detective work by Sportsnet’s Faizal Khamisa, it was revealed that Vlad simply reposted the same photo from December, except this time with a different caption.

Ok, after literally scrolling it seems Vlad posted the same picture on Insta today that he did in December. pic.twitter.com/FjdDHWrGU6

Once cold water was thrown on the possibility of Vlad coming up, most people moved on. But here’s where it gets weird. If you compare both sets of photos, one of them is slightly different. It’s as if one is taken just a few frames after the other. WHAT IS GOING ON?

Why would Vlad go back through his camera roll from December and suddenly re-post an alternate photo and include the geotag on it as if he was in New York? It’s all so weird.

In the hours shortly afterwards, both Instagram photos in question were removed from Vlad’s feed. Realizing he just gave most Jays fans heart palpitations, maybe the 19-year-old realized the error or simply just wanted to do what many teenagers do: have fun.

If it was all just a joke, then bravo to the 19-year-old. In the span of five minutes, he created mass chaos among Blue Jays fans eagerly anticipating Vlad’s arrival. People were feverishly adding Vlad to their fantasy baseball teams and ordering their custom Guerrero jerseys from the Jays Shop.

For one bright, fleeting moment, it looked like baseball’s best prospect would finally get his call to “The Show.” Instead, Guerrero Jr. orchestrated a great amount of buzz on an off-day for the Blue Jays.

For now, “Vlad Watch 2018” has been put on hold. But it may not be much longer before fans are decoding Guerrero Jr.’s social media posts to see if there are any indications of his promotion to the big leagues.