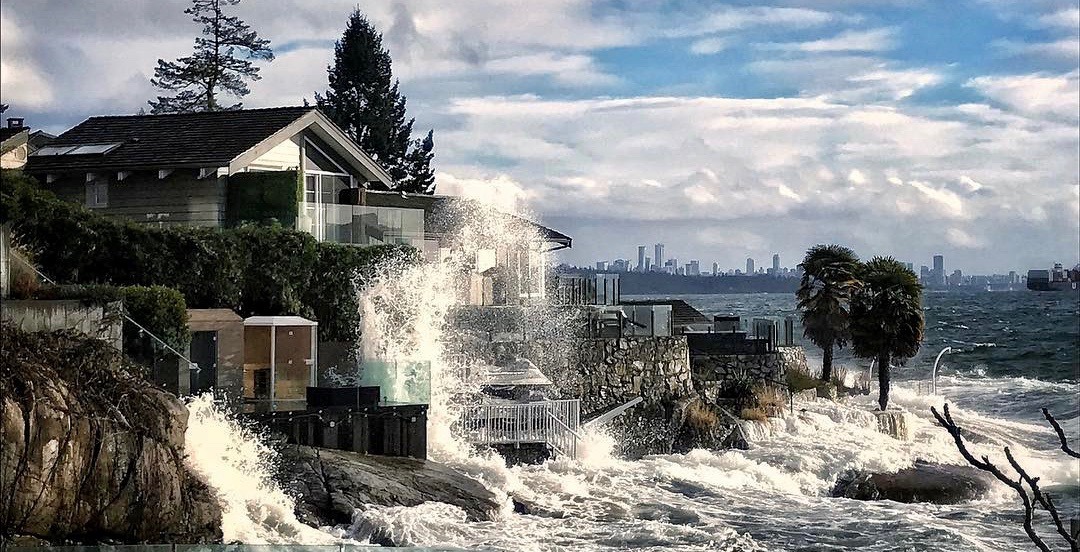 At the height of the storm, BC Hydro said more than 300,000 customers across the province had their power knocked out, with outages reported in Metro Vancouver, the Fraser Valley as well as Vancouver Island.

BC Ferries cancelled all sailings for several hours Thursday morning, there were multiple delays and cancellations at the Vancouver International Airport, while a fallen tree on track level and high winds caused multiple SkyTrain delays.

One man had to be rescued by a helicopter from a damaged White Rock pier, while another man in Surrey was injured and a person in Duncan was killed by a falling tree.

As of 6 am on Friday morning, crews restored power to 400,000 customers since the windstorm began Thursday morning. About 160,000 customers in the Lower Mainland, Fraser Valley, Sunshine Coast, Vancouver Island and Gulf Islands remain without power.

Here’s a look at some of the more dramatic videos and images from around the region showing the effects of Thursday’s high winds.

Hey neighbour, anchor down your Gazebo! You just never know. Lucky no damage to the garage roof. #bcstorm pic.twitter.com/GWB51wucWr

This #bcstorm woke me up this morning, and let me tell you it was not Santa on my roof… 😂😖 waiting for the tornado warning .. lolllll #happybirthdaytome pic.twitter.com/AKikCBbzl5

If you’re on the road today 🚙,🚶🏽‍♂️, or 🚴🏼‍♀️, pls:
• slow down,
• give yourself extra time,
• pay attention to what’s happening around you! Don’t be distracted by your 📱#VPD #BCStorm pic.twitter.com/cCTbrUcuVB

Today’s #BCstorm is a little crazy in the @City_Abbotsford. This barn just went airborne. Watch out for flying debris. Stay inside if you can. @GlobalBC @CTVVancouver pic.twitter.com/cLaEimL9LN

I had some lovely neighbours help me tie it down to a tree so it doesn’t fly into any windows or cars or people walking. Be safe everyone! #BCStorm pic.twitter.com/tZVqK8iqjD

VFRS’ Technical Rescue Team has secured scaffolding that dislodged in the wind & was leaning dangerously over E8th Ave. This team are incredible problem solvers & trained to safely access the most precarious situations. #vanspecialops #vfrs #cantf1 pic.twitter.com/CRMQKk51ab

So this is going on right now. Grateful to firefighters who are on it while waiting for hydro. I’m picking up my boy and coffee. #BCstorm pic.twitter.com/HHptoOfQb4

Welp… today we mourn our tree. Powers out at mine… not sure what to do with myself 🤔 #BCstorm #nanaimo pic.twitter.com/0dSu4jQatt

A tree fell in our neighbours yard causing my dads car trailer to rise. #BCStorm pic.twitter.com/X1AX8X0auD