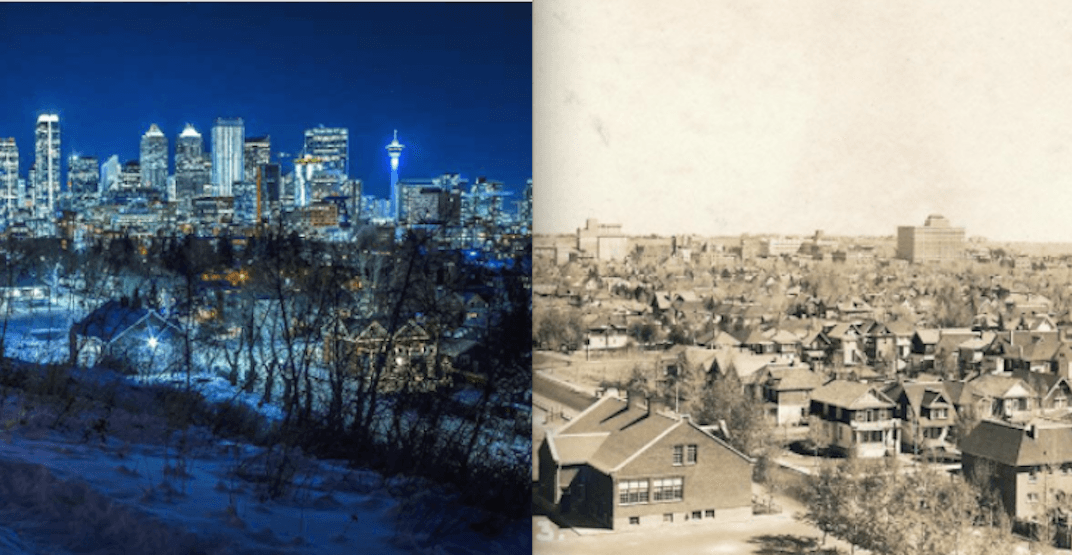 Calgary in 2018, and Calgary in 1913, from the same vantage (Dromophotography/Instagram; Alan Zakrison/Twitter)

Calgary may appear as a sleek, bustling, and modern city to visitors nowadays, but it wasn’t always the case.

Much like every other metropolitan area, Calgary rose from the ground up thanks to settlers, pioneers, and an entrepreneurial spirit or two.

It has only been 145 years since Calgary was founded back in 1875, and since that time skyrises have risen, suburban areas have sprouted, and the population has exploded to an astounding 1.33 million – making it the third most populous in all of Canada.

There are a few Twitter accounts that aren’t all that interested in present-day statistics, however, and are instead fascinated by the formative years of the city we call home.

Historians, along with accounts representing government archives, are constantly discovering new (yet quite old) photos of Calgary as it was growing into the steel and glass behemoth that is it today.

We’ve tracked down a select few of these accounts so that you can take a look back in time at the streets of Calgary, Alberta:

As a Calgary-based historian, Sanders’ professional account is chock-full of facts, photos, and newspaper clippings of a long-ago Calgary.

Jitneys were the #Uber of their day. See what the @calgaryherald had to say about them in a Feb. 25, 1915 editorial. pic.twitter.com/zMitZ8S3Zo

The Provincial Archives of Alberta: @ProvArchivesAB

While this one might not be Calgary-specific, it is still a treasure trove of images showing what Alberta looked like in years past.

View of Calgary, Alberta with three unidentified people in the foreground, before 1905 (A2431). pic.twitter.com/f5nIbgeWV7

Alan Zakrison is a Calgary-based (or Cowgry-based, as he puts it) history buff with a serious sense of humour. He’s quick with the retweet button, so following him gives you an insight into basically every account mentioned above.

Having a bit of a #BlueMonday? Perhaps this wee tale will help cheer you up. In 1934- the depths of the Great Depression- father/son George & Jerry Puckett took a chance on #YYC & built their sixth White Spot- the Mt Rundle Diner- on the SW corner of 8th Ave and 4th St SW. pic.twitter.com/evbubYHCTm

Some recent updates to the @chca community asset map: “Freakin’ at the Beacon”, the Crescent Heights branch of the @calgarylibrary, Boogies Burgers, and the 1913 Crescent Theatre. Thanks to Kevin and Richard at @chca for setting this map up! Link here: https://t.co/X0MoniM1CC pic.twitter.com/frZA5kSNWp

When all was quiet at the @calgaryzoo– and no one was looking- Dinny would sometimes sneak over to the Pavilion to snack on the climbing vines. pic.twitter.com/foRldi8L7l

And, finally, a look at just how far we’ve come:

Took a little while to figure out where this image was taken from! @cbmca pic.twitter.com/vzOqExAcjU