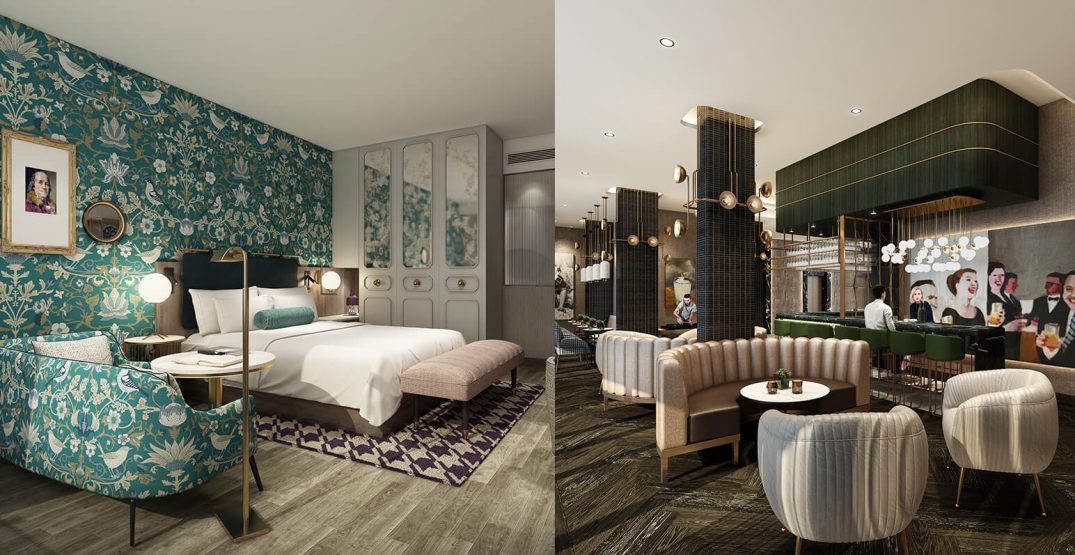 Renderings of The Dorian (thedorian.ca)

As travel begins to make a comeback, downtown Calgary is getting a brand new hotel.

The Dorian is a $110 million Marriott property, set to open in June 2022. Once complete, the hotel will feature 308 luxury rooms in a 27-storey tower.

Construction of the building has been assigned to EllisDon, with local real estate company PBA Group of Companies overseeing the project.

On Tuesday, the PBA Group and EllisDon announced the official topping off of The Dorian, a milestone that marks the completion of the structural phase of the building, bringing Calgary’s newest luxe hotel one floor closer to reality.

Located at 525 5th Avenue SW between 4th and 5th Streets, The Dorian will be two hotels in one. The upper portion of the tower will feature 133 Autograph Collection rooms, while the lower portion of the building will be home to 175 Courtyard Marriott rooms.

The hotel’s community-focused business model will source local suppliers for a number of things that The Dorian will use, from food and beverage offerings to soap and linens. Art will also be obtained from local creatives.

The new Calgary hotel was inspired by Oscar Wilde and his provocative novel The Picture of Dorian Gray, and it promises a creative, lively space for both travellers and locals.

According to The Dorian’s website, the Autograph rooms will blend “modern luxury with British whimsy and local flavour,” while the lower-level Courtyard section will cater to “sophisticated urban adventurers and business professionals seeking more for their travel dollars.”

The property will be a prominent addition to Calgary’s downtown skyline, and it will help to boost the city’s economy and create 150 new jobs.