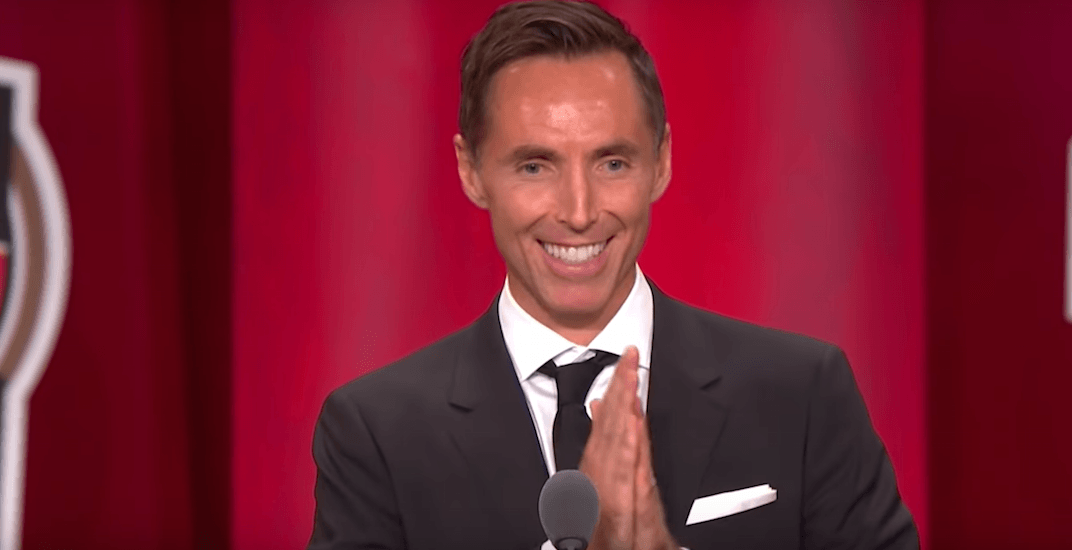 “I was never ever supposed to be here, that’s for sure.”

That’s how Steve Nash, who was enshrined into the Basketball Hall of Fame on Friday, began his induction speech.

Nash’s speech was everything you would expect from the greatest Canadian basketball player of all-time, whose journey to become a NBA superstar is a true underdog story. He was polite, humble, thankful, funny, and self-deprecating.

He thanked everyone that helped him get to the top, from the kids in Victoria that introduced him to the sport of basketball to billionaire NBA owners of the teams that he played on. Nash thanked his coaches and teammates, mentioning many by name, from high school, college, the NBA, and the Canadian National Team.

He told the story of his amazing journey, about how he sent highlight tapes to NCAA Division I schools, because scouts didn’t travel to Victoria in those days.

“Nobody liked what they saw,” he said.

Just one American university, Santa Clara, offered him a scholarship.

“I admit, I had never heard of it,” said Nash, before adding that he jumped at the chance to go there.

Nash’s head coach in Dallas, Don Nelson, joined him on stage. He credits Nelson for pushing him to become a better player.

“Nelly taught me to be aggressive to score,” Nash said. “I was very shy. I always wanted to pass, to set up my teammates. Nelly demanded that I score. It changed everything for me. It’s a big reason why I’m standing here today.”

Nash’s return to Phoenix, which saw him win back-to-back MVP honours. That might not have been possible with his coach, Mike D’Antoni, and the team’s style of play.

“[D’Antoni] taught us not to care what anyone else thought. ‘Run it down their throats, put pressure on them the entire game, and make ’em pay.’ I’ll never forget that attitude, that spirit, and those lessons.”

He even thanked the Los Angeles Lakers, the final team of his NBA career.

Nash’s most fond memory in the game of basketball didn’t come in the NBA. It was playing for Canada at the 2000 Olympics in Sydney.

“The greatest experience of my career was playing in the Olympics for Canada and my coach was Jay Triano. Jay was a hero to me. Recruited me in high school and taught me to love the game. He always said: ‘Shooting is like breathing, you’ve got to do it every day to live.'”

But it was Nash’s final message that was most inspiring.

After thanking his family, he had a message the next generation.

“Find something you love to do. Do it every day. Be obsessed.

“You don’t have to be the chosen one.

“The secret is to build the resolve and spirit to enjoy the plateaus, the times when it doesn’t feel like you’re improving and you question why you’re doing this. If you’re patient, the plateaus will become springboards.

“Never stop striving, reaching for your goals, until you get there.

“You’ll never be more alive than when you give something everything you have.”

Watch the full video for yourself here: