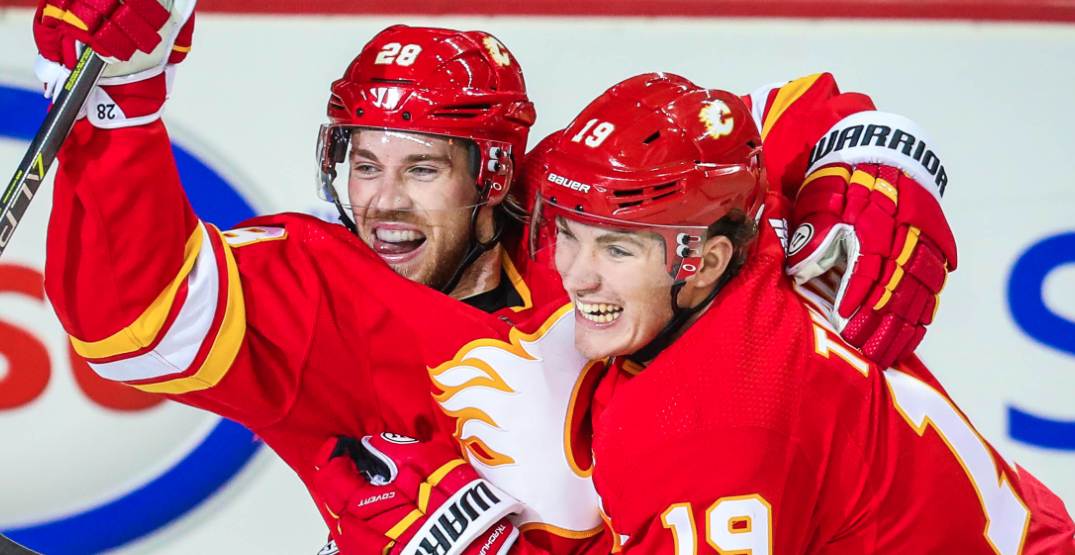 They were the most productive line in the NHL this season, and now they’re the Dallas Stars’ biggest problem in their first-round Stanley Cup Playoffs matchup against the Calgary Flames.

How does Dallas contain the trio of Johnny Gaudreau, Matthew Tkachuk, and Elias Lindholm?

Stars’ skipper Rick Bowness has the tried-and-true formula, though even the veteran coach will attest that having the plan and implementing said plan to a tee are two very different things.

“You want to make them defend as much as they can,” started Bowness, whose group will be asked to keep three 40-plus goal-scorers skating the same shift off the sheet.

“It’s on-ice awareness, and you want to make them play in their zone as much as they can, use their energy defending. If we’re going to turn pucks over and let them come at us, they’re going to create chances, and we know that. It’s important, on-ice awareness, puck management, where they are on the ice, and make sure we’re making them go 200 feet when they get the puck as much as we can.

Each is also coming off a career-year, with Gaudreau netting a personal best while finishing tied for second in NHL scoring with 115 points (40 goals, 75 assists), Tkachuk cracking in at 104 points (42 goals, 62 assists), and Lindholm slotting third with 82 points (42 goals, 40 assists).

The Flames group, skating together for an NHL-leading 965.3 minutes, also led the NHL in plus/minus with a combined +182 rating. Gaudreau’s mark of +64 and Lindholm’s register at +61 are the two-highest single-season numbers dating back to 1990-91.

“Of course, they are a pretty good line and played well all year,” said Stars defenceman Miro Heiskanen, the likely taskmaster to keep the trio in check. “We need to know when they’re on the ice and try to play them hard. It’s going to be hard, but try to stay close at all times and play hard. I think that’s the key.

“Three great players playing well with each other. They have great chemistry. Lots of skill. They work hard. That’s what makes them so good.”

Calgary went 2-0-1 against Dallas this season, and the top line didn’t disappoint in those outings, combining for three goals and eight points. Tkachuk stung the stars for three points (two goals, one assist), and Lindholm had three helpers. Gaudreau collected two points (one goal, one assist).

There’s only one way to limit that damage any further.

“As a group,” said Stars veteran Joe Pavelski, who could counter the trio with linemates Roope Hintz and 41-goal scorer Jason Robertson. “Time and space…don’t beat yourselves. When you get a chance to go forecheck, go try to turn over a few pucks, don’t get too cute with it.

All the cliche things playoff hockey is about, they’re real. There’s going to be a lot of intensity, I think, this first game. Try to take some of their time and space and know that they’re going to get a few looks here and there. Try to limit those, and end them when we can.”

“They want to get the puck as well,” the coach said.

“But that’s the only way you slow top lines down is to make them use their energy playing defence in their own zone.”