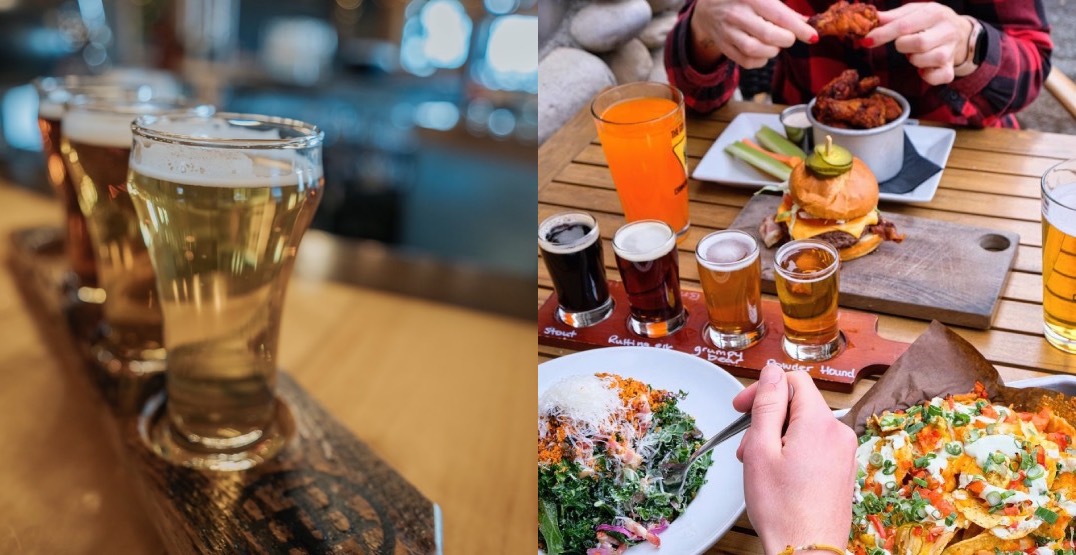 Nothing pairs better with adventure than a nice cold beer, so track down a designated driver and journey outside the city to discover the best craft breweries near Calgary.

There are plenty of great breweries IN Calgary, but what about when you venture outside the city limits?

From Canmore to Black Diamond, Cochrane to Lundbreck Falls, and beyond, these spots merit a stop on your travels or a trip of their own.

Quench your thirst and see more of our beautiful province and its varying landscape as you hit up these fine establishments (responsibly, of course).

Here are 16 of the best craft breweries near Calgary in southern Alberta.

With 23 brews on tap, craft food, and live music playing regularly in the taproom, this is definitely one of the best craft breweries near Calgary, and one of the best places full-stop in Medicine Hat.

Township 24 in Chestermere pays homage to Township Line 24, extending from Empress in the east to Canmore in the west, and the agricultural land in between, which produces some of the highest quality malt barley in the world. Try the Dominion Kolsch, Meridian Black Lager, or Stolen Canoe Pale Ale paired with one of the personal pizzas.

A post shared by Half Hitch Brewing Co. (@halfhitchbrewing)

Cochrane’s family-owned and operated microbrewery serves up fresh eats alongside delicious pints in this restaurant. Beer offerings have names like Papa Bear, Farmer’s Daughter, and Shotgun Wedding, plus Half Hitch features seasonal brews like this summer’s Prairie Wit.

With beer crafted at 1,309 metres, Canmore Brewing Company pours refreshing beverages from their brewery and tasting room, where you’ll find views of the mountains from the patio and hear the occasional train whistle by. In addition to the year-round lineup of beers, it also has seasonal brews, pilot brews, and brand-new Beer Cocktails.

This local Canmore hub is a small-batch microbrewery focused on quality ingredients and rotating beer styles. It brews approximately 500 litres of beer per batch, which allows the opportunity to have lots of variety. And with a name like “Sheepdog,” how could it not be dog friendly? Your four-legged friend is allowed at the brewery’s patio and on the main floor.

Pouring pints from two locations in Canmore is The Grizzly Paw. In addition to great-tasting beers, it also offers canned cocktails such as the Gin Squeeze, Mountain Mule, and Grizzly Greyhound, along with craft soda. Even better, The Grizzly Paw just opened Grizzly BBQ, located behind the taproom, where it’ll be serving up Alberta beef, chicken, and pork.

Hard Knox is located in Black Diamond, with plenty of outdoor space in its Beer Gardens to lounge and enjoy an afternoon outdoors with a pint. This summer, sample the R&R Raspberry Rhubarb ale, a Hard Knox Sangria, or a crisp Black Diamond Blonde.

High River Brewing Company aims to create a sense of community. The website states that the taproom is a “place to celebrate with old friends and toast to new ones.” The brewery features brews such as the Floating Barn Pale Ale, Muddy Tail Stout, Diving Fox India Pale Ale, and Rising Pheasant Brown Ale.

Waste away an afternoon on Spectrum’s patio in Lethbridge. This brewery offers it all, from amber ale to blonde, and IPAs to ESBs, and it aims to please both the beer novice and the connoisseur.

Located in the hamlet of Lundbreck, just 20 minutes east of Pincher Creek, is Oldman River Brewing. The family-focused craft brewery boasts high-quality, preservative-free, great-tasting fresh beer, and you can even stop at the stunning Lundbreck Falls on your way there.

Explore the hoodoos and fossils and then visit Drumheller’s brewery for a cold beverage. The town’s first and only microbrewery uses locally grown sustainable products like Alberta-grown and malted barley to craft its many light, dark, simple, complex, dry, sour, and hoppy beers.

Follow the Barley Trail from field to glass at Olds College Brewery. As the craft brewery industry has grown in Alberta, Olds established the Brewmaster and Brewery Operations Management program, and students are trained in all beer styles – so you’re sure to find something you like! Cans, bottles, bombers, growlers, and kegs can be picked up at the Olds College Brewery Retail Store.

Medicine Hat is a super sunny city, which is perfect because it’s open nearly every day of the year AND there’s a dog patio.

Besides the tasty beers and featured distilled spirits, live music, and trivia nights are also a regular occurrence here.

With files from Elle McLean and Hogan Short