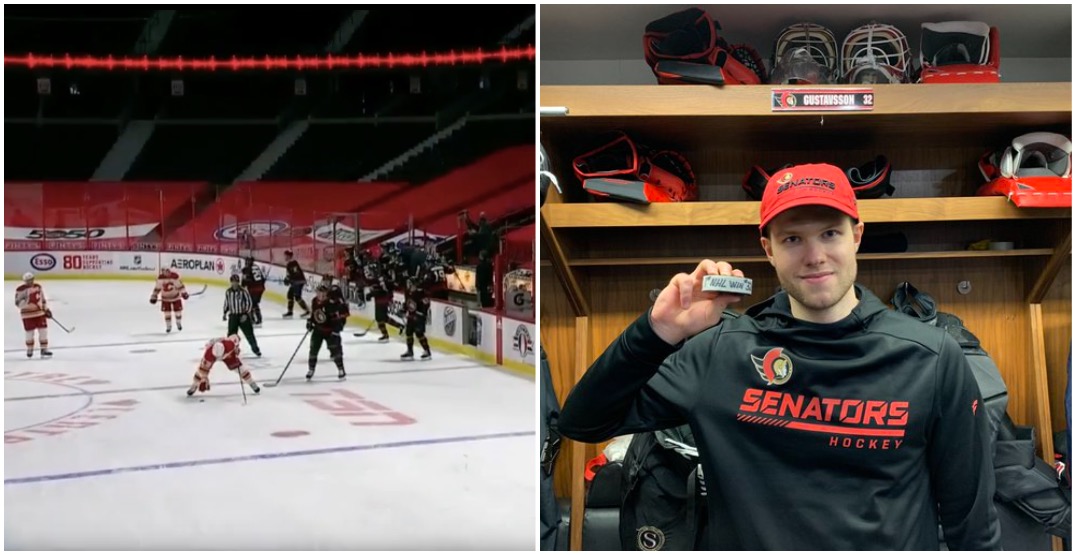 The Calgary Flames made it difficult for the Ottawa Senators to collect the game puck for goaltender Filip Gustavsson’s first NHL win.

After the final buzzer sounded to conclude a 2-1 victory for Ottawa, Senators players went to collect the milestone game puck for their 22-year-old goalie. However, Flames defenceman Rasmus Andersson got there first and grabbed the puck.

Flames make it difficult for the Sens to get the game puck for 22-year-old Filip Gustavsson, who got his first NHL win pic.twitter.com/HtTctLVSlg

Andersson looked set to leave the ice with the puck until Senators forward Brady Tkachuk chased after him, demanding he give it back. Andersson eventually tossed it aside, before Flames forward Matthew Tkachuk whacked the puck away to further delay the Senators from getting it.

The Sens really needed Gustavsson’s performance as Calgary outshot Ottawa in all three periods. The Flames led in shots 36-23, but the rookie goalie made 35 saves for his first-ever NHL win.

Most of the conversation online was focused on Andersson and Tkachuk. Many Senators fans took to social media to vent their frustration over the post-game puck incident.

lmao this is the dumbest thing in the world, what frickin' babies

these are grown ass men lol – how does this happen? Wow.

Man. That’s just low. Any goalie who records his first @NHL win deserves the game puck as a souvenir.

How pathetically petty of those @NHLFlames‘ players. #SMH

Classless move by @NHLFlames Andersson and Tkachuk. Iginla and Lanny would have never tolerated that BS on their teams.

Rasmus andersson seems to be a bit of a dirtbag the way he plays. Lotta cheap shots and chippy plays. Hope the flames dont make the playoffs

Glad he got that puck, Rasmus Andersson just about took it. Douche move.

I don’t know if it’s a respect thing? But from what I remember it’s disrespectful for us to go into another person zone it’s like a protective thing after the game. Anyways players like this guy needs to learn to have respect. And #GoSensGo

What are these Clowns 🤡 doing??? Maybe try put together a couple of wins together? pic.twitter.com/r4XLxmAPeO

Even some Flames fans did not come to the defence of the team for the incident.

Not a good look for the Flames shows low class

As a die hard flames fan, I’m embarrassed and ashamed at this team’s inability to be anywhere NEAR professional, on and off the ice.

I’m a Flames fan but this is really bush league…….